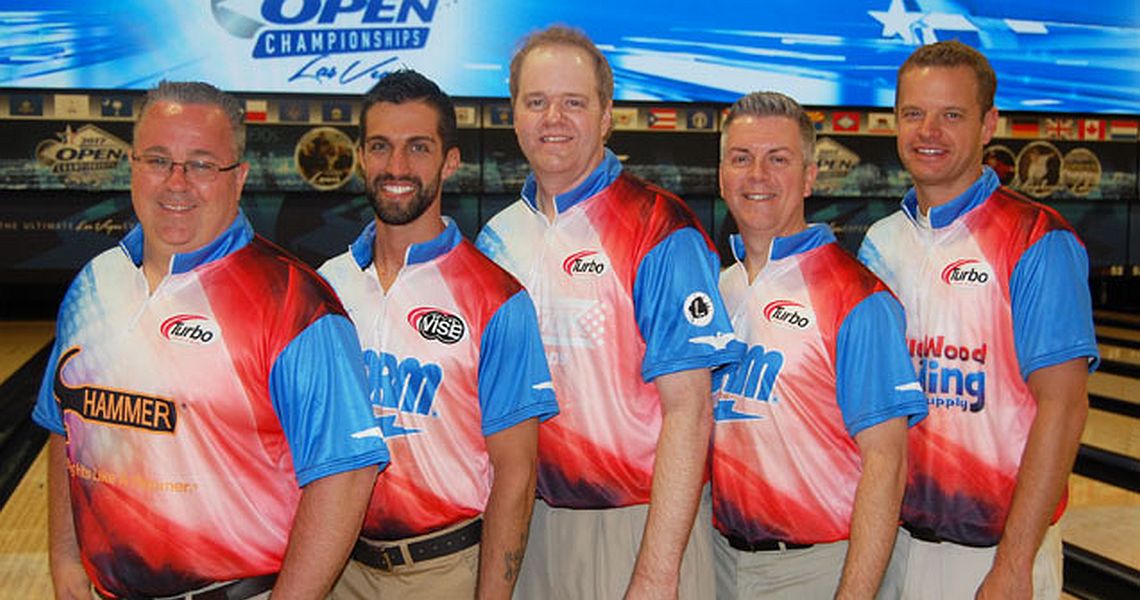 17 July, 2017
Open Championships
3904
Ads
Adam Barta of Girard, Ohio, hasn’t slept much over the last three months, but he can rest easy now that the 2017 United States Bowling Congress Open Championships has come to a close with his team atop the standings in Regular Team and Team All-Events.

Team NABR’s double-Eagle performance topped a list of many highlights during the 149-day event at the South Point Bowling Plaza, where the USBC Open Championships featured three divisions for the first time in nearly four decades.

More than 50,000 bowlers made their way to Las Vegas this year in search of Open Championships glory in team, doubles, singles, all-events and Team All-Events in three average-based divisions – Regular, Classified and the new Standard Division, which falls between the two.

Team NABR of Fairport, New York (above), took the lead in the team event during an emotional outing April 13, posting games of 1,023, 1,082 and 1,161 for a 3,266 total, but after a short, tear-filled celebration, team member Mike Rose Jr. (below left) headed to the airport to get home in time for his sister’s memorial service. 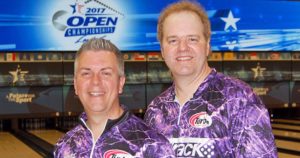 Three members of the team bowled doubles and singles the next day as scheduled, leaving the group in a great position for Team All-Events, but it was more than three weeks before Rose and Scott Pohl (right) could return to the South Point Bowling Plaza to finish the job of putting Team All-Events out of reach.

“I really feel like my sister was watching over our shoulders this whole time,” said Rose, whose sister Shelly Rose Stein lost her battle with cancer April 12.

“Without the rest of the guys there to help me get through this, I don’t know how I could’ve made it through. I’ll never look at them the same, and I don’t know how I can express my appreciation. It all brought us closer together, and to hold on for two Eagles this year is incredible. It’s something we’ll always share.”

Pohl, a former Team USA member who rolled a perfect game in the team event at the 2013 Open Championships, led the way for Team NABR in the team event this year with a 694 series. He was followed by first-year team member Anthony Pepe (675), Brian Waliczek (655), Barta (640) and Rose, the 2007 Regular All-Events champion (602).

Their 3,266 total is the lowest winning number since 1990, when two teams shared the title with 3,201. It also marks the second time Pohl, Barta, Waliczek and Rose have found success in the team event. They claimed the 2015 Regular Team title in El Paso, Texas, with Rob Gotchall of Clarksville, Tennessee.

As the rest of the more than 10,000 teams made their way through the Bowling Plaza, Barta spent countless hours and restless nights watching live scoring and tracking top performers through their nine games of Open Championships competition. The relief that comes with the event concluding almost is indescribable.

“After a few years of showing we could compete, we were able to win for the first time, and to now hang on for two more Eagles is an indescribable feeling,” said Barta, who also rolled one of five 299 games this year en route to a seventh-place finish in Regular Singles with a 776 series.

“With the late hours of checking and tracking scores, everyone thought I was nuts, but it definitely was entertaining and worth watching. It was more stressful than I ever thought it would be, but totally worth it. However, I’m glad it’s finally over.”

This year’s Regular Doubles leaders didn’t have long to wait to see if their 1,478 total was enough to hold on. 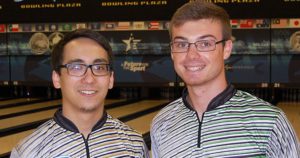 Zachary Hattori of Henderson, Nevada, and Michael Coffey of Melbourne, Florida (l-r), grabbed the top spot July 15 with just one doubles and singles squad remaining in the 2017 event.

“I never anticipated something like this happening so early in my tournament career, but this is really cool,” said Hattori, who made his third Open Championships appearance.

“I always hoped that someday I’d be on a team that would give it a run, but to happen like this is amazing. I didn’t have the best look in singles after, but for those three games of doubles, everything was perfect for me.” 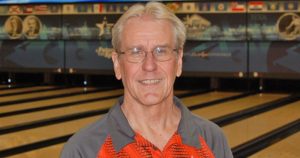 In Regular Singles, senior standout Ron Jacobson (right) of Jupiter, Florida, rolled nine consecutive strikes in his final game June 25 to sneak into the lead with an 804 series, the first time he’d surpassed the 700 mark in 14 trips to the Open Championships.

The 56-year-old right-hander finished with games of 269, 258 and 277 and moved past Matt Gasn of Clarksville, Tennessee, and Steve De Kerf of Sheboygan Falls, Wisconsin, who had shared the top spot for nearly three months with 802, rolled March 25 and March 31, respectively.

“It was a much different wait than I expected, because I didn’t plan on paying attention with everything I had going on at work. Every single morning, though, I looked at the leaderboard. Every day, when I knew singles was starting, I opened up the live scoring. I’m still in awe.” 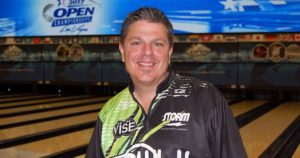 Brad Angelo (left) of Lockport, New York, entered the 2017 Open Championships focused on the success of his two-team group and maintained that mindset throughout his nine games at the Bowling Plaza, which ended with him leading Regular All-Events with a 2,176 total.

“Even as I sit here hearing the news over the phone, it doesn’t feel real,” said Angelo, a 2016 Open Doubles titlist at the Bowlers Journal Championships presented by USBC.

“I didn’t allow myself to get too excited because I knew there still were a lot of great teams and bowlers coming in, including one of my former students, Zack Hattori, who made a run just yesterday. What an absolute honor this is. It couldn’t have happened without the other nine guys, but I accept this win as a token of all the hard work they’ve put in.” 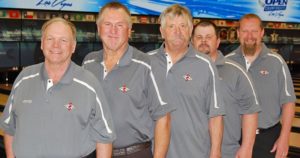 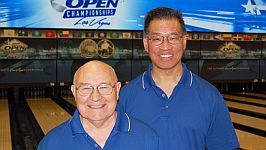 Two longtime friends, Stuart Sheck of Germantown, Maryland, and Robert Tonelli (l-r) of nearby Henderson, got the job done in Standard Doubles with a 1,236 effort May 14.

The Standard Singles and Standard All-Events standings were topped by a pair of young collegiate bowlers, who both competed for the first time. 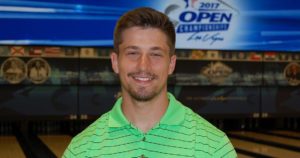 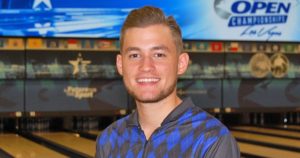 Przychocki was second in the all-events standings with 1,897, and Johnston’s (left) singles effort was tied for third.

The Classified Team trophy will be headed to Alexandria, Minnesota, for the third time in four years, this time bearing the name Scotty’s 8, which led the way with a 2,569 total on games of 908, 810 and 851. 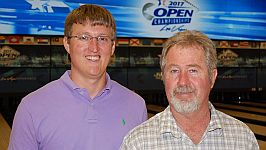 In Classified Doubles, first-timer Dustin Keener of Cleveland, Georgia, and John Carter (right, l-r) of Toccoa, Georgia, swooped in during the event’s homestretch and moved into the lead with a 1,133 total July 7.

Two more first-time bowlers landed at the top of the Classified Singles and Classified All-Events standings. 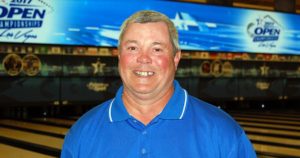 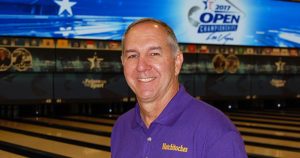 The 2017 Open Championships got underway at the South Point Bowling Plaza on Feb. 18. During the 149-day run, there were 10 perfect games, five 299s and two 298s, while 22 additional bowlers rolled 11 consecutive strikes. 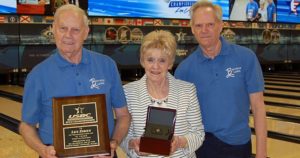 In 2018, the Open Championships will head east and make its first appearance in Syracuse, New York, since 1999. It will be the tournament’s fifth trip to Salt City.