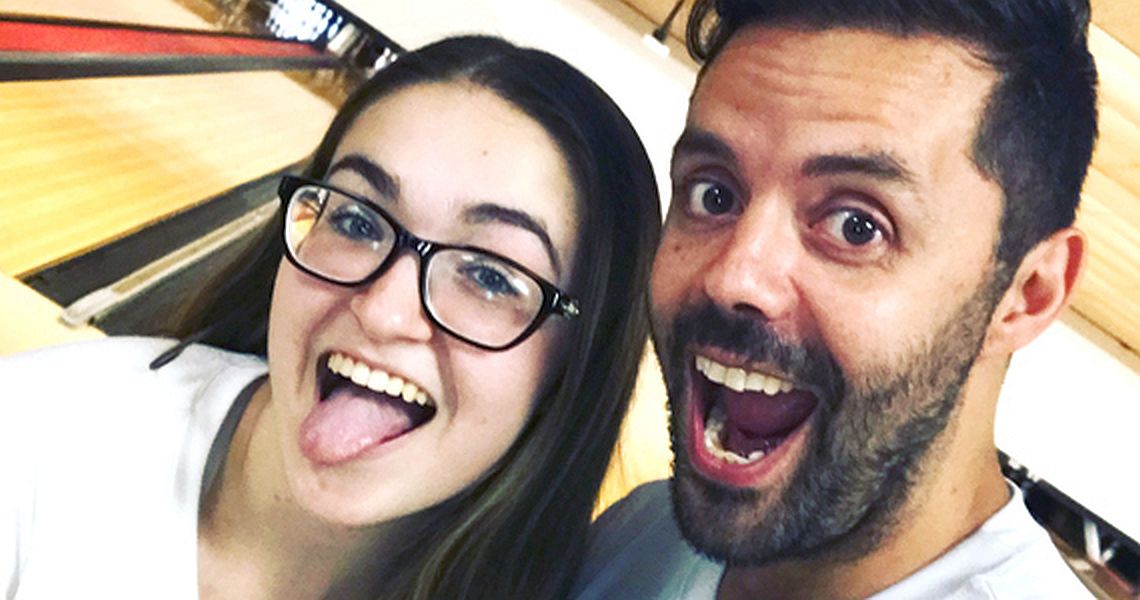 19 May, 2018
Spare Shots
3954
Ads
For PBA star Jason Belmonte, the shots fired on that horrific day at south Florida’s Marjory Stoneman Douglas were, figuratively speaking, heard halfway around the world. Like millions of people, Belmonte wanted to do something. He just wasn’t sure what he could or should do.

When he heard that 17-year-old Hannah Carbocci was a member of the Stoneman Douglas girls’ bowling team and had not only survived the mass shooting, but had launched a fund-raising effort on behalf of the families of victims, Belmonte decided to make a phone call.

“What I thought was going to be my role was as simple as a phone call, and I was willing to do that,” Belmonte said in early May. “Within the first couple of minutes, I knew I wanted to meet the family.”

Admitting he knew nothing about the family, he decided to make a side trip to Florida after the PBA League competition in Portland, Maine, to visit Hannah and her family. 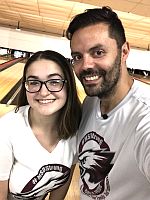 “It was a fantastic day,” he said. “I didn’t know what to expect; I just wanted to meet them. I knew nothing about them other than that terrible incident, but I could see they are very passionate about bowling, and the causes they fight for.

“When you talk about bowlers’ bad luck, you talk about ringing 10 pins and splits, but that is nothing compared to what this family went through. They used a community of bowlers to support other bowlers. That’s the one thing I’ve taken away from this trip.

“They raised more than $30,000 to support the victims’ families,” he continued. “That’s a lot of money to raise, and not from one person, but from hundreds of people. It just shows how amazing our family of bowlers really is.”

Belmonte made the trip to Florida and went bowling with the Carbocci family. He gave the family bowling balls and bags, and with the assistance of fellow PBA competitor and pro shop operator Andres Gomez, got the equipment drilled.

Belmonte’s gesture was merely something he did out of caring, and because he was in a position to do something positive.

“I don’t know what I’m doing in my future, but I’m very aware of my place in the bowling industry,” he said. “I think most of our guys know what their position is; it’s something that comes with the territory. If you’re not doing your share, you’re not taking care of your position atop the sport to help people.”

In a feature story by USBC’s Matt Cannizzaro, who originally broke the news about Belmonte’s plans to visit Hannah and family, Belmonte said, “If I do ever retire from competing, I would love to fly the flag for bowling on a more regular basis… Straight up, I love bowling and I want bowling to be healthier and better. I think the bowling community as a whole is a beautiful community. I think when bowlers need each other, we step up.”

So Belmonte put on his wings and flew. From Australia to Parkland, Fla. – a short trek northwest of Fort Lauderdale – by way of Portland. And he made a new friend.

“Hannah, in particular, we’re going to be good little friends,” Belmonte said. “She has some aspirations in the sport, and as time goes along, I’ll see what I can do to help her.”

How Belmo flies: It’s a testament to PBA’s International Players

The story of Jason Belmonte’s “side trip” to visit Hannah Carbocci and her family in Parkland, Fla., after bowling in the OceanView at Falmouth PBA League in Portland, is a bit understated.

To get a feel for what “Belmo” (and other PBA players from Australia, Southeast Asia, Europe and other destinations around the world) have to go through to bowl in PBA Tour events in the United States, below is Belmonte’s itinerary to get to Portland:

Grand total: roughly 10,000 miles – one way – over a span of 32 hours. The “side trip” to Florida added another 1,600 miles to the trip before he headed home to Australia to spend a few days with his wife and three children before returning to Detroit for the PBA Tour Finals. With modifications, it’s something he (and other PBA international players) repeat every time they compete in the U.S.

“I don’t know how many miles I fly per year,” Belmonte said in response to an email question. “It’s a number that I don’t want to know.”

But, he noted with a “smile” emoji: “I have just under 3 million miles/points in my (frequent flier) account. I very rarely use them because I am saving them to take my family on the most ridiculous, first class experience around the world. It will be a holiday to end all holidays that I will pay for using all of my points.”

This weekend’s Xtra Frame schedule includes the PBA Xtra Frame Wilmington, Open, the second of eight Xtra Frame PBA Tour events on the 2018 schedule, and the USBC Queens from the National Bowling Stadium in Reno.< 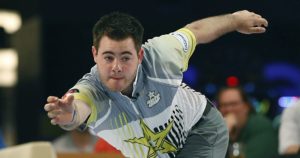 Anthony Simonsen (right) of Austin, Texas, will defend his 2017 title Saturday-Sunday at Ten Pin Alley Family Fun Center in Wilmington, N.C. Defending champion Diana Zavjalova (below left) began her optional qualifying rounds in the Queens on Thursday (she’s exempt into the field of 64 match play finalists, but is bowling to try to improve her automatic spot as the no. 64 seed).

Xtra Frame will cover Queens qualifying through Saturday along with three-game, double-elimination match play Sunday and Monday. The stepladder finals will air live on CBS Sports Network on Tuesday, May 22.

The PBA50 Tour returns to Xtra Frame May 28-30 with start-to-finish coverage of the PBA 50 Northern California Classic presented by MOTIV from Harvest Park Bowl in Brentwood, Calif. 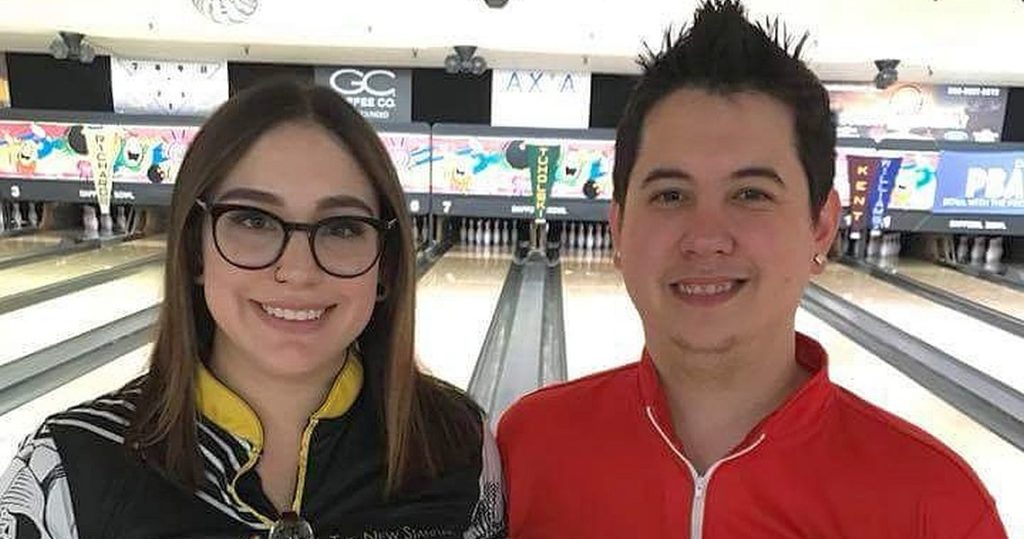 Butturff (pictured above with Correen Lieber) posted a 8-4 match play record and a 20-game total of 4,605 pins, including match play bonus pins, to win the PBA FiX Auto of Puyallup Open, a standard PBA Northwest Regional event, by 60 pins over Dean Richards of Tacoma, Wash. In addition to a $2,000 first prize, Butturff picked up his second PBA Regional title of the year and his 15th since his 2016 rookie year.

Brown won the PBA50 portion of the tripleheader with a 6-2 match play record and 3,508 total pins, beating Rob Rice of Sunnyside, Wash., by 138 pins for the $1,500 first prize and his second PBA50 Regional title.

Lieber, an amateur, had a 4-3 match play record and knocked down 3,146 total pins for her 15 games to top Lori Eskew of Hillsboro, Ore., and Kelsey Abrahamsen by 12 pins in the PBA-PWBA women’s event to earn the $1,000 prize. It was Lieber’s first PBA-PWBA regional win, but she doesn’t get credit for a title because she’s a non-member. Eskew and Abrahamsen both had 3,134 pins.

Burns built a comfortable lead in the qualifying round going into Sunday’s modified eight-game round robin finals. After losing his first two matches, Burns won four matches in a row to distance himself from top challenger Dino Castillo from Highland Village, Texas. After losing in game seven, Burns took a 58-pin lead over Castillo into position round where he expanded his winning margin to 92 pins with a 220-216 win over Castillo to claim the $2,500 winner’s check with a 21-game total of 4,601 pins, including match play bonus pins. 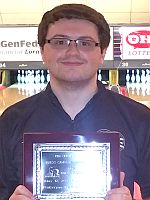 Ric McCormick (left) of Cincinnati was almost perfect in defeating Chris Via of Springfield, Ohio, 299-239, to win his first PBA Regional title in the PBA Baldo Campana Memorial/Ohio Lottery Central Open presented by DV8 at Rebman Recreation in Lorain, Ohio, while 2017 PBA50 Rookie of the Year Michael Haugen Jr. of Phoenix won the “senior” half of the doubleheader. Both events were held on Saturday, May 12.

McCormick, a 22-year-old PBA rookie, missed a perfect game on his final shot in the title match. He earned $2,000 after he downed Zachery Tackett of Huntington, Ind., 245-174, while Via edged Dan Hochstein of Canton, Mich., 259-225, in the semifinal round to set up the championship match. 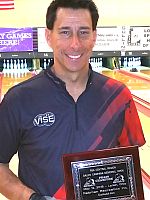 Haugen (right) defeated amateur Carl Bishop of Tiffin, Ohio by 181 pins to win the PBA50 event. He finished with a 10-2 match play record and a total of 4,914 pins for 20 games, including match play bonus pins, to win the $1,400 first prize and his fifth PBA50 regional title.

The only event on PBA’s Regional calendar for the May 18-20 weekend is the Waxahachie Southwest Challenge for non-title winners at Hilltop Lanes in Waxahachie, Texas.

PBA fans who would like a unique perspective on the PBA are invited to visit JoshHydebowling.com to read Josh’s newsletters. Josh has been a “PBA Super Fan” since 1990 when, at age nine, he began befriending a number of PBA stars and chronicling PBA history. Regardless of being confined to a wheelchair, Hyde managed his website, writes his newsletter and bowls. One of his proudest accomplishments in bowling a 300 game using a ramp.

In cooperation with the PBA, youth bowlers planning to participate in the 2018 Teen Masters are invited to save $50 on a special PBA package. For details, visit: [email protected]

The PBA has learned of the recent deaths of three former members. Stephen Dieter, a 12-year PBA member from Palmerton, Pa., died suddenly on May 8. A veteran of 67 PBA Regional events with a personal-best second place finish in Elmwood Park, N.J., in 2011, Dieter owned and operated a pharmaceutical delivery service and a pro shop in Haja Lanes. Artur (Eric) Bergstrom, an 11-year PBA member from Meridian, Idaho, died on April 4. He was a retired U.S. Navy commander with 30 years of military service. Rudy Garcia of Fort Worth, Texas, who joined the PBA at age 62, died on March 19 at age 67. He bowled in eight PBA50 Tour events during his limited PBA career.