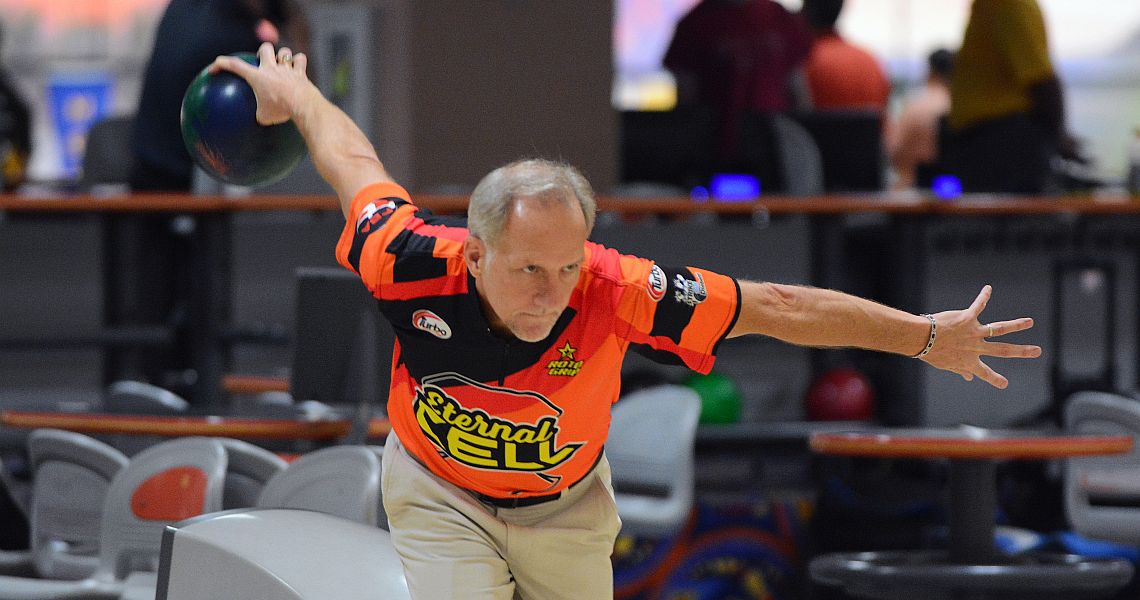 29 May, 2018
PBA50
2582
Ads
Professional Bowlers Association Hall of Famers Ron Mohr of North Las Vegas, Nevada, and Walter Ray Williams Jr. of Oxford, Florida, both have found success early in the 2018 PBA50 season, and they’ll look to continue that momentum over the next two weeks in Las Vegas.

Mohr and Williams will be on the lanes at the Sam’s Town Bowling Center as the defending champions in the Super Senior Classic and United States Bowling Congress Senior Masters, respectively.

Mohr (featured photo), a member of the 2018 PBA Hall of Fame class, will be the first to put his title on the line. The Super Senior Classic, for USBC members age 60 and older, will run from May 30-June 3.

Williams will be joined by more than 250 of the world’s best bowlers age 50 and older, including Mohr, for the Senior Masters from June 4-10.

Prior to the stint in Las Vegas, which includes the Suncoast PBA Senior U.S. Open presented by Storm from June 10-15, the West-Coast swing of the 2018 PBA50 season will kick off in Brentwood, California, a relaxing eight-hour jaunt from the Entertainment Capital of the World.

If Mohr (left) finds the same success he enjoyed in the first four events of the season, he could find himself rolling back into his driveway in North Las Vegas only a few hours before his first qualifying block at the Super Senior Classic.

The championship round of PBA50 Northern California Classic presented by MOTIV is scheduled for Wednesday at 6:30 p.m. local time. In four events this season, Mohr has made the five-player stepladder finals twice, with a best finish of third, and has been the first player out on one other occasion.

“In a tournament like the Super Senior Classic, where pinfall carries throughout the event, it’s crucial to figure out the pattern as quickly as possible, but, even though I won’t be able to make it to the practice session, I still feel good going in,” said Mohr, a nine-time PBA50 champion and two-time PBA50 Player of the Year.

“I’m excited about the opportunity but not at all looking at it like I’m going in to defend a title. Instead, it’s a chance to maybe capitalize on another competitive opportunity, which I’m extremely grateful for, and add to the success I’ve had there.”

Qualifying at the 2018 Super Senior Classic will include 12 games over two days (six games each day), with 1 in 4 bowlers advancing to the Cashers’ Round based on total pinfall.

The top 12 bowlers after the six-game Cashers’ Round, based on 18-game pinfall totals, will advance to round-robin match play and have a chance to advance to the unique group stepladder portion of the event.

The stepladder finals of the Super Senior Classic will be broadcast live on BowlTV on June 3 at 2 p.m. Eastern. The winner will take home $8,000. 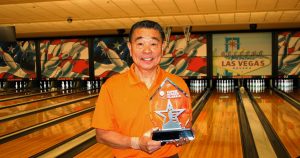 A year ago, Mohr was the top seed for the finals at the Super Senior Classic for the second consecutive time. He lost to Japan’s Junichi Yajima (right) in the 2016 title match. 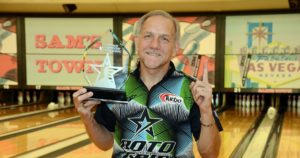 The two met again for the 2017 championship, with Mohr (left) besting the defending champion, 230-188. The win ended a run of 12 championship-round appearances without a victory for Mohr, who had collected his last PBA50 Tour title in 2012.

“To that point, I’d had many top-five appearances and opportunities to win again, but things just hadn’t been working out,” Mohr said. “I knew I had a pretty good look, and I’d been competitive and knocking on the door, so I hoped that win was coming. You always wonder when it will be your last chance or last time in that position, and it also proves that confidence can be fragile.”

Mohr now is 62 years old but maintains a daily fitness regimen that includes hundreds of pushups and situps. While the exercises aren’t as effortless as they may have been in the past, he has no intentions of changing the things that have helped him become such a prolific senior standout.

Williams (right) has been an icon on the lanes for decades, and last year at the Sam’s Town Bowling Center, the winningest competitor in PBA history added one more unique accolade to his list of accomplishments when he became the first bowler in history to win the USBC Masters and Senior Masters twice each. 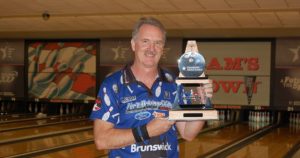 He entered the championship round at the 2017 Senior Masters (left) as the top seed and defeated left-hander Andy Neuer of Lewisburg, Pennsylvania, 248-199, to claim the coveted title and $16,000 top prize.

Williams, also a USBC Hall of Famer, won his first Senior Masters title in 2014, also in Las Vegas, and is one of seven two-time winners at the event. His Masters victories came in 2004 and 2010, both at the National Bowling Stadium in Reno, Nevada.

A Senior Masters victory in 2018 would help the 58-year-old right-hander reach another milestone as the only three-time winner at the event and first player since Tom Baker (right) in 2007 to successfully defend a Senior Masters title.

“I look to win any tournament I go into, and anytime you can make that happen, it’s really nice,” said Williams, who owns 47 PBA Tour titles and 11 PBA50 victories, including two majors.

In four PBA50 events this season, Williams has two runner-up finishes, a fifth-place effort and a ninth-place performance. He continues to put himself in position to win, much as Mohr had prior to his Super Senior Classic win. Now, it’s just a matter of the pieces falling into place as they have more than 100 times before.

“It would be nice to get some breaks on TV,” Williams said. “I’ve bowled some decent games on TV this year, and in all three games I lost in the stepladders, I bowled pretty well, but things just didn’t work out, which is part of the game. Fortunately, I’ve been getting there, so that’s a positive note. I just need to continue bowling well and maybe a little better than that.”

Williams also made the most of the break between the first two swings of the season by competing in other events. Along with the opportunity to stay competitive and sharp, the additional events also helped show him some things he needed to work on before the Brentwood stop.

His travels included a visit to the USBC Open Championships and Bowlers Journal Championships presented by USBC in Syracuse, New York, which offered him two challenging lane conditions.

“I need to make better shots,” said Williams, who posted a 1,903 all-events total at the 2018 Open Championships. “I’ve been bowling pretty well lately, but I bowled in some other tournaments since the Senior Tour finished and had a couple of not so great finishes, which was a little disappointing.

“I plan to practice a little bit these last couple of days, and I bowled decent here (in Syracuse), so, overall, I feel pretty good about what I’m doing. Hopefully, I can just make a lot of great shots and the right decisions, and that will help me to a good finish.”

The USBC Senior Masters is considered a PBA50 major championship and all competitors will bowl 15 games of qualifying over three days to determine the 63 bowlers who will join Williams in the double-elimination match-play bracket. Williams is guaranteed the No. 64 spot in the bracket but can improve his seeding by bowling well in qualifying.

Match play at the 2018 Senior Masters will take place June 8-9, and the stepladder finals will be broadcast live on BowlTV on June 10 at 1 p.m. Eastern. The champion will earn $20,000.

For more information on the Super Senior Classic and Senior Masters, click here.

The Cashers’ Round, match play, group stepladders and stepladder finals from the Super Senior Classic, and the entire Senior Masters, will be broadcast live on BowlTV.