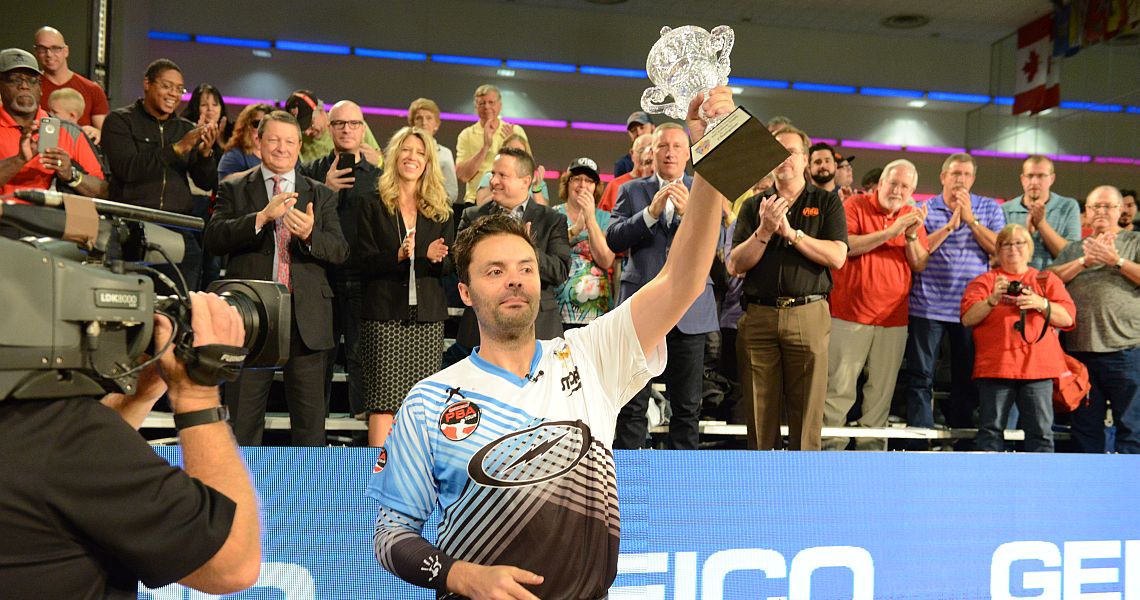 With the win, Belmonte (pictured above with the trophy) became the first player in PBA’s 60-year history to win three major championships in a single season.

Belmonte’s 16th career PBA Tour title was worth $60,000, and it moved him into sole possession of third place on PBA’s list of all-time major titlists behind PBA legends Earl Anthony and Pete Weber who both won 10 majors.

In addition to his historic victory, Belmonte was part of the first nationally-televised PBA Tour event that included two sudden-death roll-offs, one of which gave the two-handed Australian star his shot at the title.

“That’s going to go down as one of the most exciting shows in a long time,” said Belmonte, who added the PBA World Championship to his collection of major titles that includes two PBA Tournament of Champions, two PBA Players Championship and an unprecedented four United States Bowling Congress Masters titles.

At age 34, he is a U.S. Open title away from the PBA Triple Crown (U.S. Open, TOC and PBA World Championship, Grand Slam (Triple Crown plus Masters) and the “Super Slam” (Grand Slam plus Players Championship).

Since winning his first major in the 2011 PBA Players Championship at age 27, Belmonte has won his nine titles over a span of seven seasons. It took Anthony 11 seasons to win his first nine majors; it took Weber 26 seasons to accomplish the same feat. Both won their 10th majors in the next season.

“It feels bloody amazing,” Belmonte said. “I wasn’t aware of being the first to win three majors in a year until Kimberley Pressler (PBA sideline reporter and former Miss USA) mentioned it after the show. It’s been a really, really great year. I don’t know what else to say. 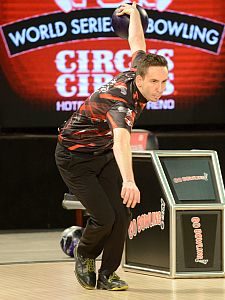 “I’m honored to be one win away from arguably the two best bowlers who ever lived on the all-time majors list,” he added. “I don’t know how I’ll feel if I get to 10 majors, but I’ll tell you that no. 9 is a pretty good feeling.”

The opening match of the World Championship set the stage for the rest of the day when 2017 PBA Rookie of the Year contender Matt Sanders (right) of Evansville, Ind., and two-time PBA Tour winner Kyle Troup of Taylorsville, N.C., finished in a 248-248 tie. 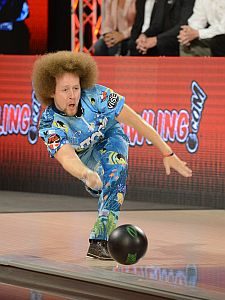 After missing a 10 pin spare attempt on his final shot, Troup (left) struck on his first shot in the one-ball sudden-death roll-off and moved on when Sanders left a 7 pin on his roll-off shot.

In the second match, Ryan Ciminelli of Cheektowaga, N.Y., survived a 193-180 battle with Troup, who missed a pair of three-pin spare conversion attempts. 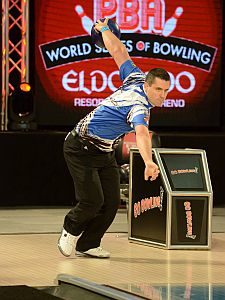 In the semifinal match, Ciminelli (right) appeared to have Belmonte on the ropes after striking on seven of his first eight shots while Belmonte began with four spares. But Belmonte got lined up and threw the final eight strikes, forcing the finals’ second sudden-death roll-off when Ciminelli left the 2-4 on his fill ball for a 257-257 tie.

In the roll-off, Belmonte went first and left a 7 pin. Needing a strike to win, Ciminelli left the 2-5-6 on his first shot.

“I was fortunate Ryan didn’t bowl one pin higher than me,” Belmonte admitted. “If you watch Ryan enough, you know he’s one of the best players out here in the clutch.” 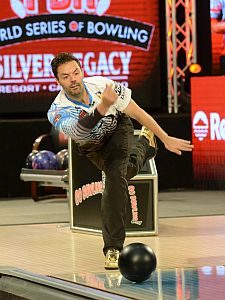 In the championship match, Belmonte (left) started with three strikes, converted a 10 pin spare and then got a fortunate strike in the fifth frame when a finger grip came out of his ball.

“I thought I was in real trouble when the grip came out and I still struck,” he said. “But then I was wondering if the glue (on the new grip) would set, or if I’d start thinking about it coming out again.

“I also know that just when you think Jesper’s having a bad game, he’ll strike out on you.” 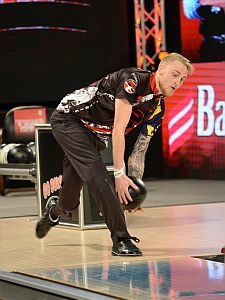 It appeared that was exactly what was about to happen. After leaving the 4-6-10 in the first frame for an open, Svensson (right) threw the next five strikes to take the lead. Svensson was nursing a nine-pin lead after six frames when the changing lane conditions impacted both players.

“The traffic of urethane balls Jesper and Kyle were using laid down an oil track that made reading the progression difficult,” Belmonte said. “You can usually see early tell-tale signs, but not this time. It got to the point I didn’t know what to do.”

Four consecutive single-pin spares, including a 7 pin on Svensson’s first shot in the 10th frame, gave Belmonte an opening.

“In the last frame, needing two strikes to win after not striking on that lane the three previous attempts, I made two of the best shots I’ve ever thrown in my life,” Belmonte said. “It was a good guess and even better execution.

“After Jesper left that 7 pin, I knew all I had to do was throw one more great shot,” Belmonte said. “I never think I’ve won until I look up and see, mathematically, I’ve won.”

Working on a strike in the ninth frame, Belmonte struck on his first shot in the 10th and needing only a high count on his second to lock up the title, Belmonte struck again and then he looked up at the scoreboard, confirming he had won.

With his fourth title of the 2017 season – including three majors – Belmonte became the odds-on favorite to win his fourth GEICO Chris Schenkel PBA Player of the Year title in the past five years. Voting will take place early in January.

The PBA Tour will return to action Jan. 23-27 when a field of 15 PBA Tour stars, led by Belmonte and defending champion EJ Tackett of Huntington, Ind., head to Tokyo to compete in the 2018 DHC PBA Japan Invitational.

ESPN’s coverage of the GEICO PBA World Series of Bowling IX concludes next Sunday with the World Bowling Tour Women’s and Men’s Finals presented by the PBA at 1 p.m. EST.

Competing in the women’s finals will be Malaysia’s Shalin Zulkifli, Danielle McEwan of Stony Point, N.Y., and top qualifier Diana Zavjalova of Latvia. Men’s finalists will be Marshall Kent of Yakima, Wash.; Svensson and Belmonte. 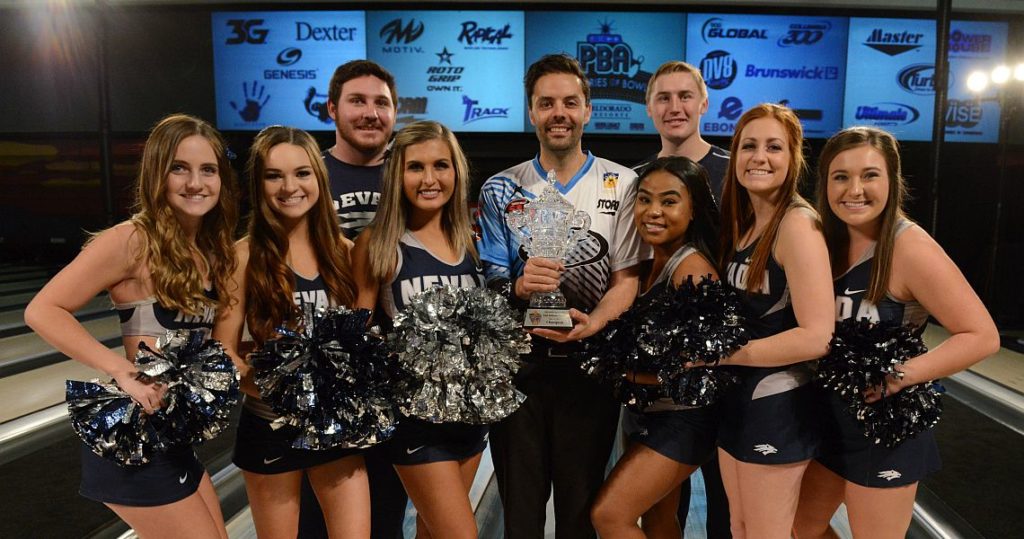