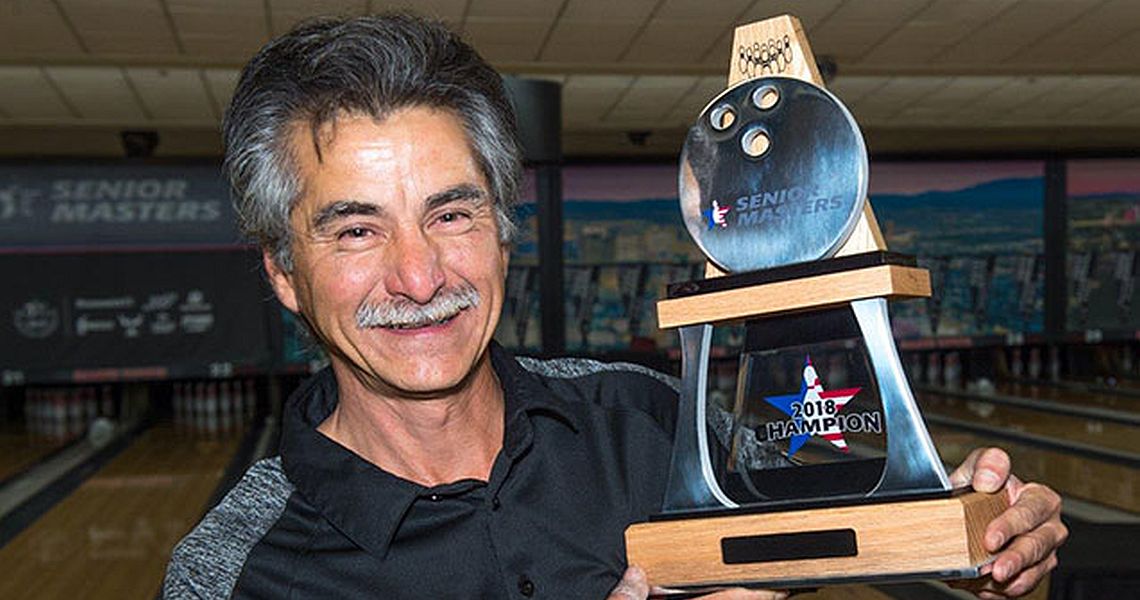 For more than 40 years, Chris Warren of Grants Pass, Oregon, has looked up to and learned from United States Bowling Congress and Professional Bowlers Association Hall of Famer Norm Duke of Clermont, Florida.

Warren (right and above with the trophy) was able to put those lessons to work Sunday at the Sam’s Town Bowling Center in Las Vegas as he defeated his childhood friend, live on BowlTV, two times to win the 2018 USBC Senior Masters for his first PBA50 title.

He earned $20,000 for the victory and became the third bowler in history to win both the USBC Masters and Senior Masters, joining Dave Soutar and Walter Ray Williams Jr. in the exclusive club. Warren’s Masters title came in 1990 as one of his six career wins on the PBA Tour. 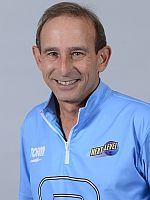 As the undefeated top seed in the double-elimination format, Duke (left) had a second chance at the title after falling 269-220 in the first game of the title tilt.

Duke got out to an early lead in the rematch after Warren left, and failed to convert, a 7-10 split in the second frame. Warren rallied to finish with seven consecutive strikes and a nine-count on his fill ball, forcing Duke to strike on the first shot of his final frame and get at least eight and a spare to win by a single pin. 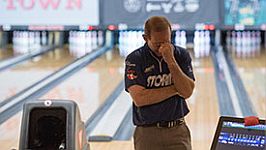 “There’s no words to describe how good Norm Duke is,” said Warren, a PBA journeyman whose last national title came in 1992. “Norm beat me at what I do best, which is throwing strikes, but it came down to one error. I outscored him, but he bowled an incredible game. You never want to see that happen to your buddies, and it happened. I just feel fortunate to have been there, and winning really is incredibly special.”

Prior to making the deciding shot, Duke did the math, knew what he needed to win, or at least tie, and used his decades of experience to make the best shot he could.

“I trusted myself to make my shot, and I didn’t,” Duke said. “But, I look back and say, ‘Norm, you made the greatest shot in the history of your lifetime for the win, and you won it there, and then you lost it.’ I won it with one shot and lost it with another. That is sport. This is hurting right now, and it’s supposed to. If it didn’t hurt, we wouldn’t care. And if we care, it hurts. This is a tough one, but Chris is an excellent, excellent, excellent player, and a well-deserving champion, and I’m so happy for him.”

Warren, Duke, hall of famer Del Ballard Jr. and a slew of other Southwest standouts grew up bowling together in the Dallas-Fort Worth area. They’ve pushed each other for decades and shared countless successes and defeats.

In Warren’s recollection, they beat up on him pretty handily, but it helped make him the bowler he is. That’s still true today, along with the continued support of his six brothers, three sisters, wife, Michelle, and mother, Mary, who turned 92 this weekend.

“Norm is someone who could always execute and make his spares, and I learned a lot from him in those areas, and Del is someone I always looked up to because he had no fear,” Warren said. “Del still helps me work on a lot of things, both mentally and physically, and Norm has helped me with my spare game tremendously. It’s amazing. Yes, we’re competitors, but we’re also lifelong friends. We’re family.”

On the way to the 2018 Senior Masters title, Warren broke four tournament records.

Including the shootout round that helped him earn his spot in the stepladder finals, and the second game with Duke on Sunday, Warren bowled a record 14 matches at the Sam’s Town Bowling Center. He collected 13 wins, which were consecutive, both records, after losing his first match to Jerry Smith or Englewood, Colorado, 511-501. The streak includes surviving the shootout round.

In his 14 matches, Warren averaged a record 243.9, including a high series of 847 in a win over Noel Vazquez of Sacramento, California, and a 300 game on the way to eliminating Williams, the defending champion, 772-756.

Two-time Senior Masters champion Tom Baker of King, North Carolina, previously held the tournament records for most matches (13), most wins in one tournament (12) and most consecutive wins (nine), all set in 2006 on the way the first of his two consecutive Senior Masters wins. Ross Packard of San Jose, California, averaged 243.8 in match play at the 2005 event.

Warren left a 2 pin in the first frame and then rattled off 11 consecutive strikes, while Haugen left a 7-10 split on his first offering and only was able to throw one double the rest of the way.

Warren earned the meeting with Haugen by defeating PBA50 newcomer Keith Lesko of Prosper, Texas, who was competing in the first major event of his career, 234-168.

The opening match of the stepladder was a nail-biter against two-time PBA50 Player of the Year Ron Mohr (right) of North Las Vegas, Nevada, in which Mohr had an opportunity to shut out Warren with two strikes and nine pins in his final frame.

Instead, Mohr left a ringing 10 pin on his first shot, allowing Warren to strike on his first shot to seal the win. He achieved that and tossed two more strikes to escape with a 236-217 victory.

The Senior Masters is the premier event for USBC members age 50 and older, and the 2018 edition featured 272 entries. All competitors bowled 15 games over three days to determine the 63 bowlers who joined Williams in the double-elimination match-play bracket. All rounds of qualifying and match play also were broadcast live on BowlTV.

For complete standings or more information on the Senior Masters, click here.