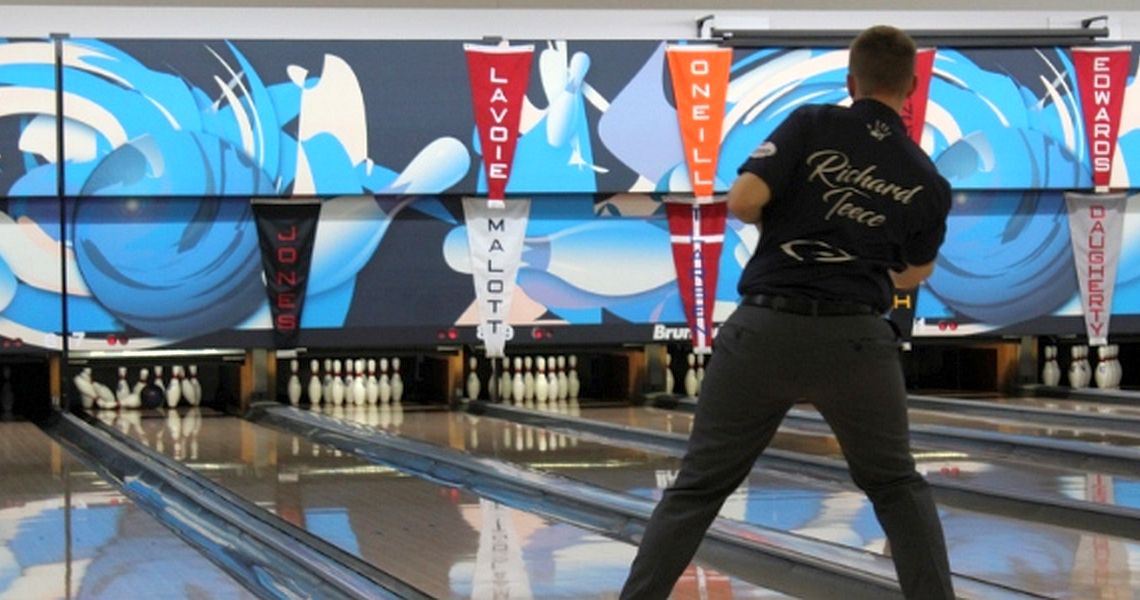 20 October, 2018
PBA National Tour
1156
Ads
Bowling on two different lane conditions on the same pair of lanes, England’s Richie Teece put together a 9-3 record and averaged 232 for 12 games to lead after the first day of match play Friday in the FloBowling PBA Tulsa Open at The Lanes at Coffee Creek in Owasso, Oklahoma.

Bowling on the PBA 39-foot Bear lane condition on the left lane and 33-foot Wolf condition on the right lane in each match, the 18 players in the match play field are having to call on all of their experience, as well as consulting with their ball reps, to make the right ball choices and develop their strategy for lane play. Almost without exception, the players are using a different ball and playing entirely different lines on each lane.

To get to this point in the tournament, the 18 finalists were the top scorers after two rounds (24 games) of qualifying in the Wolf and Bear Opens – the first two events of the FloBowling PBA Fall Swing – but bowled on the same lane condition throughout qualifying in those tournaments.

Teece (left and featured photo), who finished fifth in the Bear Open and 43rd in the Wolf Open, figured out the right combination in Friday’s first match play round going 6-0, highlighted by the fourth match where he beat Sean Rash, 300-201.

“My strategy is to keep it simple,” Teece said. “I’m using two balls that I’m confident in for each lane and making the adjustments from there. For me, too many options will only lead to confusion.

“I was fortunate to get good starts in the first three matches,” he added. “In the 300 game I actually threw a Brooklyn (crossover strike) on the first ball on the left lane but after doing that it was a pretty good learning experience for me on what I needed to do to adjust.

“In the second round I only won three matches but I bowled well. I concentrated more on the mental part of staying focused, keeping my composure and remembering we have six more games left to bowl.”

Four-time and reigning PBA Player of the Year Jason Belmonte (right) of Australia, who was 15th after the first match play round but now sits in fifth after posting a 7-5 record and averaging 226 for the day, explained his mindset entering match play.

“As far as strategy is concerned you really have to develop a split personality,” said Belmonte, who has two wins this season. “You have to be one guy on one lane and another guy on the other lane.

“It’s not like bowling on the same pattern where you can get a rhythm and then repeat shots pretty quickly,” the two-hander added. “You can get lined up on one lane but that puts added pressure on you to strike on the other lane and that can make it difficult to execute the needed repetition.

“Getting that rhythm has been difficult because with my ball motion I couldn’t string strikes and I’ve left a lot of splits,” Belmonte continued. “For the most part I’ve been guessing wrong until today’s second round. I think I’ve been too tricky and creative with my moves when I didn’t have to be.”

EJ Tackett (left) of Bluffton, Ind., who won the Bear Open Thursday to become the first three-time winner this season on the Go Bowling! PBA Tour, finished the day in second. He posted a 7-5 match play record and averaged 214 in Friday’s match play.

“The key for me has been to isolate and focus on each lane and not think too far ahead,” the 2016 PBA Player of the Year said. “The further you go in the tournament it seems like the differences are magnified. You kind of have to treat each lane as if you’re bowling a totally different round.”

The final Tulsa Open match play round gets underway Saturday morning at 9 a.m. CT which will determine the top five players for the stepladder finals at 12:30 p.m. The finals also will require the players to bowl on the Bear condition on the left lane and Wolf condition on the right lane.

The entire Fall Swing is streamed live on Xtra Frame on FloBowling which is providing multi-stream coverage of every lane of competition. For subscription and schedule information click here. Lanetalk is providing Fall Swing tournament statistics which can be accessed by visiting the Lanetalk link on the pba.com homepage.