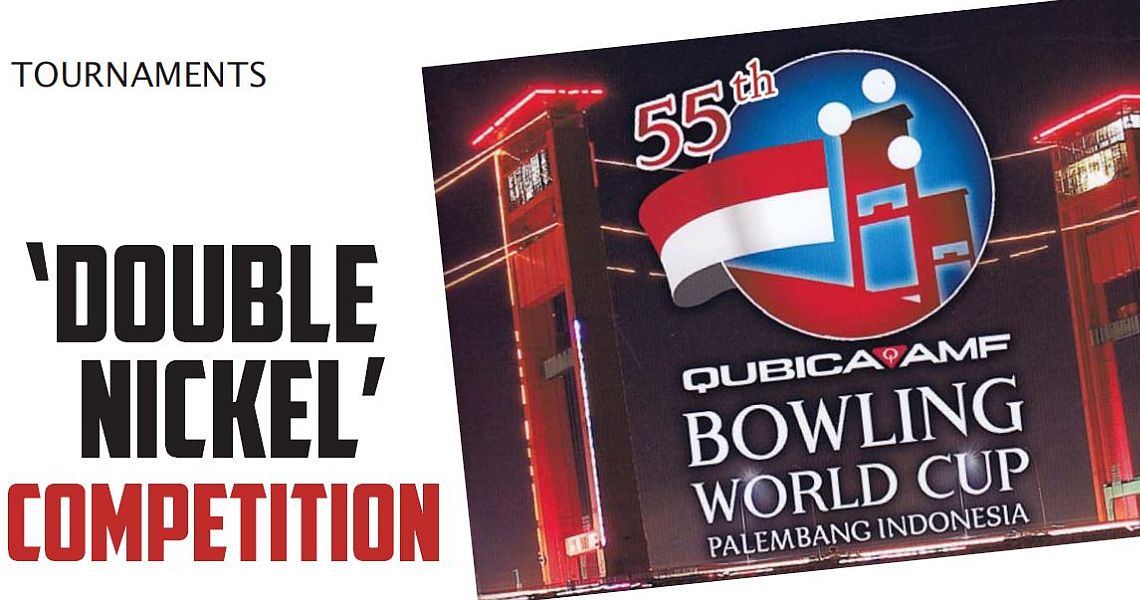 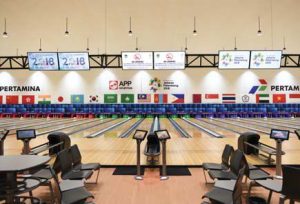 Mrs. Hj. Percha Leanpuri B.Bus., MBA, president of the Indonesian Bowling Federation (PBI), said, “We are delighted to have been selected as the hosts of this most prestigious tournament. And I can promise all bowlers, officials, and visitors a very warm welcome and a most memorable 55th QubicaAMF Bowling World Cup. We are looking forward to meeting you here in Palembang in November.”

Palembang is the capital city of the Indonesian province of South Sumatra. The host venue for the tournament is a 40-lane center located within the vast Jakabaring Sports City Complex, an Olympic-style, multi- sport complex which was the host venue for the Asian Games in August of 2018 that included bowling. A total of 166 athletes from 18 nations competed in bowling at these games, all vying for gold, silver, and bronze medals in team and individual events. 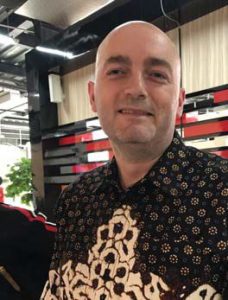 Director of ABS Pte Ltd., QubicaAMF’s official distributor for Indonesia, James Murray, commented, “The 40-lane bowling center has the latest QubicaAMF bowling equipment, including BES X Ultimate Scoring, ensuring the bowlers will have some of the best playing conditions in the world. We at ABS, together with the wonderful people of Palembang, are looking forward to welcoming the world’s leading bowlers, their supporters, and visitors in November and to show them our beautiful city.” A full-service pro-shop and café will also be added to the center in time for the tournament. 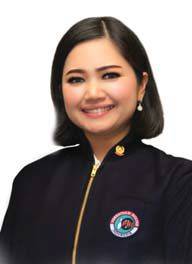 “What a wonderful venue!” added Pat Ciniello, chairman of the board of QubicaAMF. “It is indeed an honour for bowling, particularly for the Bowling World Cup, that we are part of such superb sports facilities here in Palembang. I am so grateful to H. Herman Deru, S.H., M.M, Governor of South Sumatra, for supporting the event, and to the president of the Indonesia Federation, Mrs Hj. Percha Leanpuri B.Bus., MBA, chairwoman of the local organizing committee.” 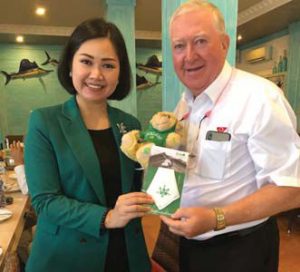 Mrs. Percha Leanpuri, president of the Indonesian Bowling Federation, with QubicaAMF World Cup tournament director, Bernard Gibbons, who is presenting her with an Irish linen handkerchief.

This is a return visit to Indonesia for the QubicaAMF Bowling World Cup, which was last held in Jakarta in 1980 when 35 countries participated; less than half the number expected at this year’s event. A 23-year old Paeng Nepomucemo won his second of four World Cup victories that year (and a world- record) after an epic three game 676-663 duel with Mexico’s Alfonso Rodriguez. The women’s division was won that year by Canada’s Jean Gordon.

In August, Anne-Marie Board, the tournament manager for QubicaAMF, Bernard Gibbons, the tournament director, and James Murray, director of ABS, QubicaAMF’s distributor, visited Palembang to meet with Chairwoman Leanpuri and Governor Deru to plan the myriad aspects of the tournament: hospitality, receptions, banquets, the official hotel, the opening and closing ceremony, transportation, manpower, tourism, entertainment, and arrangements for a well-appointed media facility for the local and world press. Each is an essential element that contributes to the uniqueness of the event. 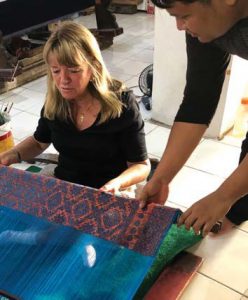 Anne-Marie Board, QubicaAMF World Cup tournament manager, trying her hand at making a Songket during a visit to Zianal Songket in Palembang. Songket is a fabric that belongs to the brocade family of textiles that is handwoven in silk or cotton, and intricately patterned with gold or silver threads. The metallic threads stand out against the background cloth to create a shimmering effect.

The excitement for the tournament will be felt immediately as bowlers and supporters arrive at Palembang’s International Airport, where there’s a massive floor-to-ceiling, wall-sized banner promoting the 55th QubicaAMF Bowling World Cup Tournament. The banner has been in place since August. Arriving bowlers and guests will be greeted with cultural dancing and music, and a team of locals will be assigned to meet and greet the visitors, escorting them to the hotel.

The five-star Wyndham OPI Palembang has been designated as the official tournament hotel, which is connected to an upscale shopping mall with a light rail transit train station that has stops throughout the city and Palembang International Airport.

After the welcome reception, the bowlers will assemble at the Jakabaring Bowling Center for the ball control check and official practice. This will be followed by the opening ceremony, a colourful event full of pageantry, entertainment, and speeches by dignitaries from the Indonesian government. 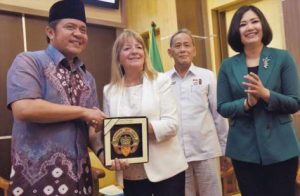 Anne-Marie Board, QubicaAMF World Cup tournament manager, in the center, presenting Herman Deru, governor of South Sumatra, Indonesia, on the left, with a friendship plaque, as Indra Gamulya, executive committee of Olympic Solidarity, and Mrs. Percha Leanpuri, president of the Indonesian Bowling Federation, look on with pride.

The victory banquet will be held in the ballroom of the Wyndham OPI Palembang Hotel, a lavish affair that will include traditional cultural dancers and music. Two more awards will be presented at the banquet — the Sports Man and Sports Woman of the tournament. These awards are voted on by the bowlers. 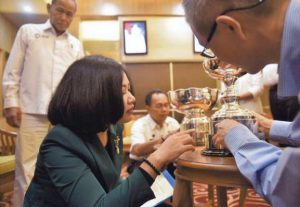 An added bonus for any host country is to have their local representative win the tournament. It’s only happened twice in the first 54 years of the tournament: Bob Worrall (U.S.A.), 1981, at New York City’s Madison Square Garden; and Shannon O’Keefe (U.S.A.), 2018, in Las Vegas. With a home gallery cheering them on, this may be the first time Indonesian bowlers make the finals and keep the winner’s trophy in their home country. 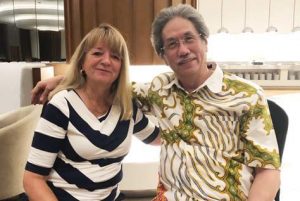 Bowlers, coaches, supporters, and guests from around the world will return home with very fond memories of their visit to Palembang, Indonesia, and will cherish the camaraderie between the participating nations and the new friends they will have made. It’s all part of the panoply of the QubicaAMF Bowling World Cup.

A special thank you to Aswin Limansantoso, a special advisor to the organizing committee, who coordinated gathering the information and photos for this story.

He has been the director of 18 AMF World Cups, an officer in national and international trade associations, and a pro bowler during a career that spans more than 60 countries and 50 years.