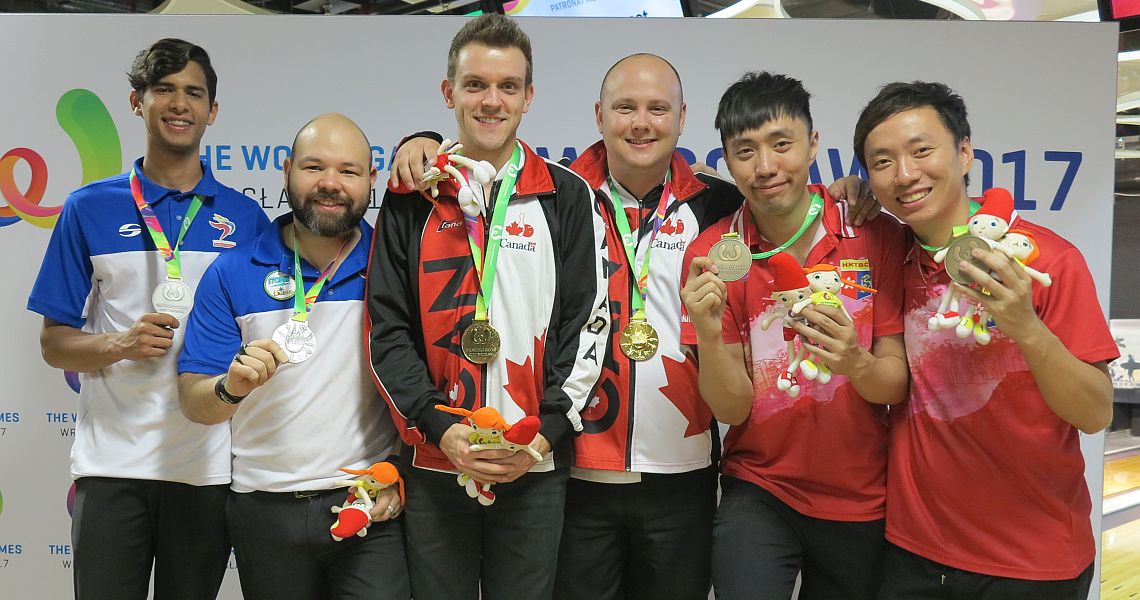 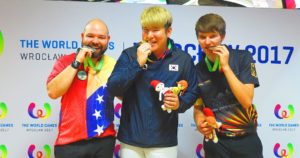 PBA members on both the men’s and women’s sides starred in the medal rounds of the 2017 World Games, an international competition for sports that are not included on the Olympic Games program, currently underway in Wroclaw, Poland. The bowling program included singles and doubles events for both genders. 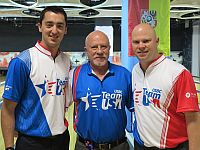 American stars Tommy Jones and Marshall Kent (left, l-r, with Team USA head coach Rod Ross in the middle) were eliminated in the quarterfinal round in doubles. Jones also made it to the quarterfinals in singles before he was eliminated. Kent didn’t make it into the 16-man elimination rounds. 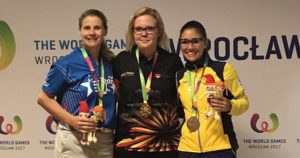 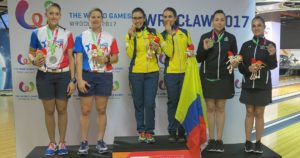 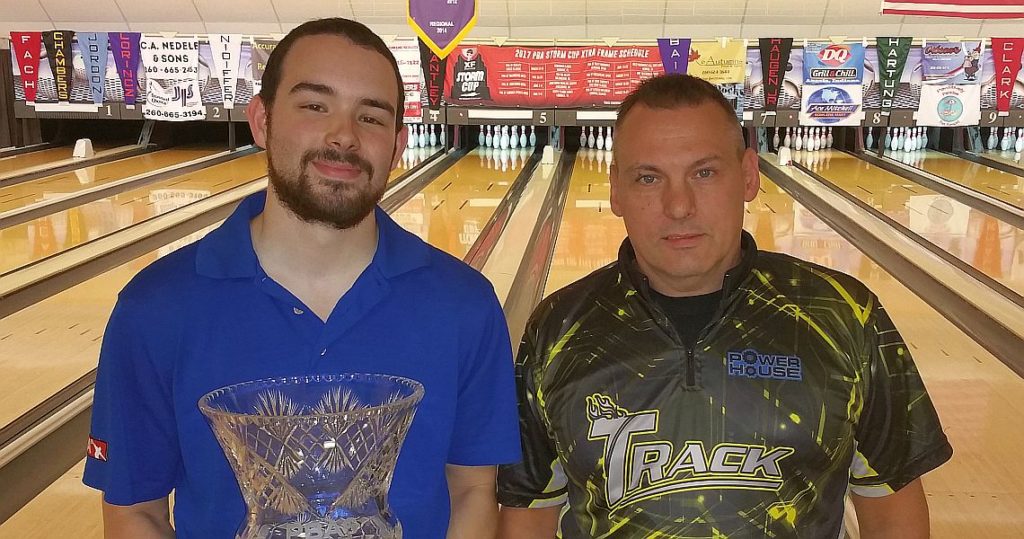 Klingler (pictured above with Angola Bowl proprietor Bill Burke, right), a 25-year-old second-year PBA member, finished with a 5-3 match play record and a total of 4,816 pins for 21 games, including match play bonus pins, to upset Tackett and a field including several PBA Tour title-winners for the $2,600 first prize.

Caso, a third-year PBA member, spoiled Daugherty’s run at defending his Spring Hill title by defeating Daugherty in the championship match, 244-225. The no. 3 qualifier for the stepladder, Caso took care of Jason Sterner of Rockledge, Fla., in his first match, 279-221, and then defeated Chris Arcaro of Carolina Beach, N.C., 268-203, to advance to the title match. Caso earned $2,500 along with his title in the PBA South Region’s longest-running tournament. 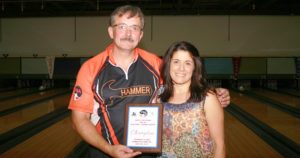 Leonard, an 18-year PBA member, qualified ninth in the 52-man field. He moved steadily through the field but did not take the lead until position round where he retained his perfect match play record for a 101-pin victory over runner-up Sammy Ventura of Norwich, N.Y. The victory was worth $1,500. 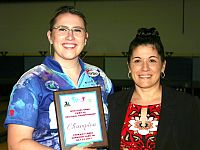 Russo, a non-member, finished with a 5-1 match play record and earned $925 as the runner-up. USBC Hall of Famer and New Jersey native Carolyn Dorin-Ballard of Keller, Texas, was third, another 63 pins behind Russo.

Lesko, who won a pair of PBA South Region titles in 2001 and 2003 before taking an extended sabbatical from PBA competition, advanced to the title match by getting past Chris Keane of Cape Coral, Fla., 215-194, in the semifinal match after Keane eliminated defending champ Harry Sullins of Chesterfield Township, Mich., 236-225, in the opening game of the stepladder finals.

Bailey opened the tournament with a 290 game and built his tournament lead to 73 pins after the 13 games of qualifying. Losing his first match in the modified eight-game round robin finals allowed 2014 USBC Queens champion Maria Rodriguez of Colombia to take a one-pin lead, but Bailey rebounded by winning five of his next six matches to build an insurmountable 272-pin lead heading into position round. Amateur Jack Zuniga of Tulsa, Okla., beat Bailey in the final match, 244-237, to retain second place but Bailey earned the $2,500 winner’s check with a 5,114 total.

Weier posted a 10-2 match play record and a 20-game total of 5,181 pins, including match play bonus pins, to win Sunday’s Secoma Lanes Open, a standard PBA Northwest/ West Regional event, by 144 pins over Darren Tang of San Francisco. Weier’s performance included a trio of 300s (including back-to-back) in match play on his way to the $2,500 first-place check. 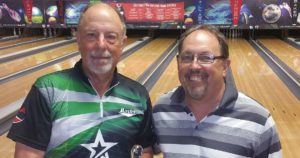 In a unique format, the top 14 players after qualifying bowled 10 games of round robin match play where the winner received 10 bonus pins. After the final position round match, the top four advanced to a two-game final round where bonus pins were awarded based on score. The top scorer received 12 bonus pins, second place received eight bonus pins, third four bonus pins and fourth received no bonus pins.

Closing the July regional schedule are the PBA Japan Region’s first events of 2017, the PBA Chameleon Open on July 23 followed by the Women’s Chameleon Championship on July 30, both at Shinsayama Grand Bowl in Sayama.

The Greater Richmond Central Open at Richmond 40 Bowl in Richmond, Ind., a one-day event on Aug. 13, is the lone regional event over the Aug. 11-13 weekend.

Tim Pierce of Portland, Ore., went from embarrassed to elated in record time Tuesday morning in the PBA50 South Shore Open. On his first shot of the tournament at Olympia Lanes in Hammond, Ind., the 62-year-old Pierce left the dreaded 5-7-10 split. On his second shot, he converted the “lily” for a spare. It’s extremely rare for PBA competitors (of any age) to leave the 5-7-10…but it’s even more rare to convert the spare.