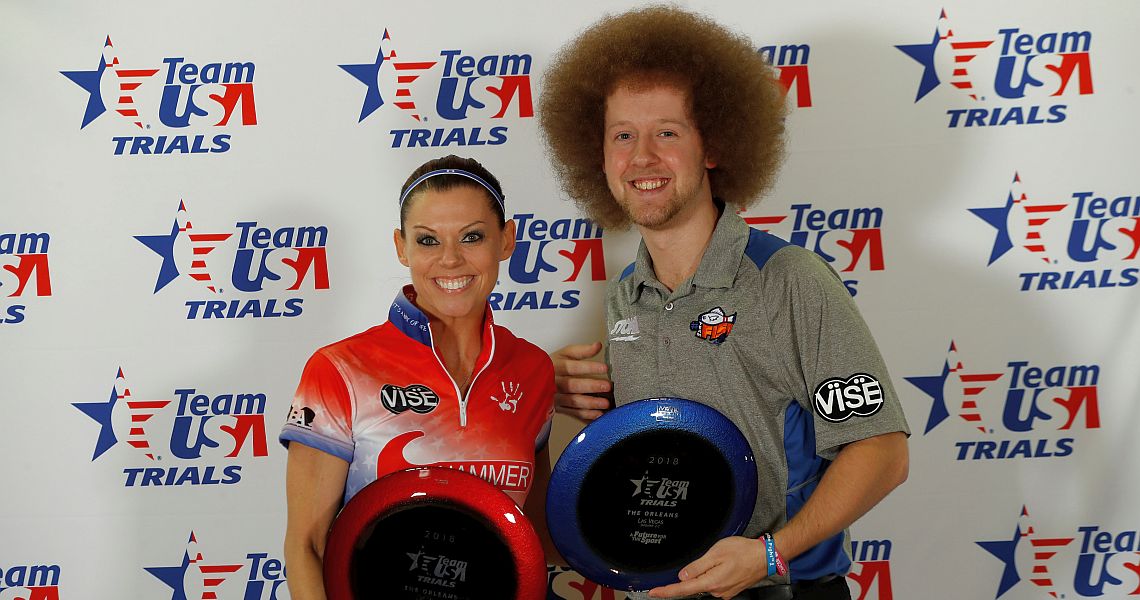 Troup finished the 2018 event with 21 ranking points over the course of five rounds at The Orleans in Las Vegas to earn his debut on Team USA, and O’Keefe earned her 14th-consecutive appearance representing the red, white and blue by finishing the week with 46 points.

The players in the field earned points based on their finishing positions in each qualifying round. The top bowler of the block earned one ranking point, second place earned two points, etc., with the lowest total of ranking points after the five six-game blocks determining the 2018 Team USA Trials champions.

Troup, a 26-year-old two-hander, put together a dominating performance throughout the week, capping his fifth-round performance with a 265 game to solidify his spot at the top of standings.

Troup finished Sunday’s final round on the 41-foot Rome lane condition in third place with a 1,441 total. Wesley Low Jr. of Palmdale, California, led the final round with a 1,488 total, including the tournament’s first 300 game to start the block.

Each round of the 2018 Team USA Trials was contested on a different World Bowling Pattern. 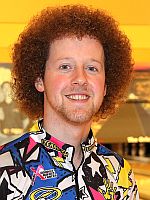 “My goal was to come out here and make the team, and it’s quite an amazing feeling,” said Troup (left), a two-time Professional Bowlers Association Tour titlist.

“But to be crowned the Team USA Trials champion, too, is definitely one of the biggest accomplishments of my career. I’ve worked really hard to get where I’m at so far, and I’m going to have to work twice as hard this year to make sure I don’t let my country down. It will be an honor to represent the United States, and I plan to give it all I got.”

The wins also earned Troup and O’Keefe the chance to represent Team USA at the 2018 QubicaAMF World Cup. The location of the 2018 event has not been announced.

Also earning automatic spots on Team USA 2018 based on their overall performances at the Team USA Trials were AJ Johnson of Oswego, Illinois, Jakob Butturff of Tempe, Arizona, and Darren Tang of San Francisco.

Andrew Anderson of Holly, Michigan, Matt Farber of O’Fallon, Illinois, Marshall Kent of Yakima, Washington, and Matt Russo of Millstone Township, New Jersey, were selected to join Team USA 2018 by the National Selection Committee based on their performances this week.

Chris Barnes of Double Oak, Texas, Tommy Jones of Simpsonville, South Carolina, EJ Tackett of Huntington, Indiana, Michael Tang of San Francisco and Chris Via of Springfield, Ohio, were selected to join Team USA 2018 by the National Selection Committee based on submitted resumes.

Shannon O’Keefe won her first Team USA Trials in 2008, and after nearly claiming the win at the 2017 event, she was elated to find herself at the top of the standings after a 27th-place finish to start her week at The Orleans.

The 38-year-old right-hander finished the final block in 10th place with 1,317. Mabel Cummins of Elburn, Illinois, cruised to the top spot in Sunday’s block, firing a pair of 300 games on her way to a 1,503 six-game total. 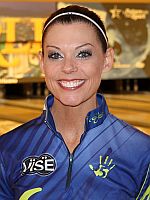 “I’m super, super happy,” O’Keefe (left) said. “This is something I’ve been writing in my bowling journal for months. I’ve wanted to win Team USA Trials. Last time I won was a decade ago, and being able to represent Team USA in the World Cup is a bucket-list item for me. It’s such an incredible honor.”

Jordan Richard, Kelly Kulick of Union, New Jersey, Stefanie Johnson of McKinney, Texas, and Shannon Pluhowsky of Dayton, Ohio, earned automatic spots on Team USA 2018 based on their overall performance at The Orleans.

Josie Barnes of Hermitage, Tennessee, Julia Bond of Aurora, Illinois, Liz Kuhlkin of Schenectady, New York, Danielle McEwan of Stony Point, New York, and Sarah Wille of Hoffman Estates, Illinois, were selected to join Team USA 2018 by the National Selection Committee based on their performances at the Team USA Trials this week.

Sydney Brummett of Fort Wayne, Indiana, and Missy Parkin of Laguna Hills, California, were selected by the National Selection Committee based on submitted resumes. 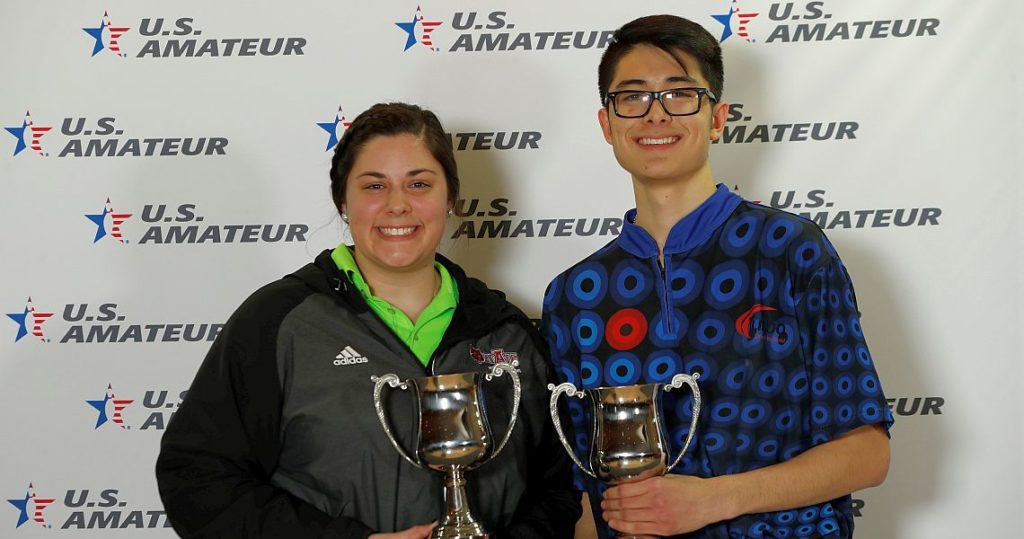 Cortez Schenck also made the finals of the U.S. Amateur in 2017, but he fell in the semifinal match. On Sunday, Schenck got off to a quick start in the title match against defending U.S. Amateur champion Matt Russo, firing five consecutive strikes to start.

Russo stayed clean and drew closer after Schenck missed a 10 pin in the eighth frame, but the 18-year-old right-hander sealed the win and his debut on Team USA with a strike to start the 10th frame, 237-217.

“This year I wanted to be more aggressive since I feel like I was a little conservative last year, and I’m happy I was able to get the win. Joining Team USA and getting to be a part of a team with so many bowlers that I’ve looked up to is unbelievable.”

Schenck earned his spot in the title match with a win over Brent Boho of Colgate, Wisconsin, 219-176.

Jordan Richard found herself in a similar situation as Schenck after finishing the 2016 U.S. Amateur in third place. The 22-year-old right-hander found redemption as she rolled to the 2018 title against defending champion Julia Bond, firing 10 consecutive strikes on her way to a 289-201 win.

“I knew if I trusted myself I could get it done,” said Richard, who was a Junior Team USA member in 2016. “I was kind of nervous going into it, but I stuck to my game plan and was able to get it done. It really feels like a big weight has been lifted off my shoulders, and being able to be a part of Team USA means everything to me. This is a dream come true.”

Bond started the semifinal with five consecutive strikes on her way to a 232-191 victory over Sarah Wille.

Age-eligible participants competing this week also were vying for a spot on Junior Team USA 2018.

Earning automatic spots based on their overall performance in the boys’ division were Schenck, Boho, Bryan Hahlen of Greenwood, South Carolina, and Anthony Neuer of Lewisburg, Pennsylvania.

Adam Zimmerman of Deer Park, New York, and Tommie McNeal of Wichita, Kansas, were selected to join Junior Team USA 2018 by the National Selection Committee based on their performances at the 2018 Team USA Trials and 2017 Junior Gold Championships.

Laura Branch of Victor, New York, and Amanda Morgan of Killeen, Texas, also were selected for the team based on performance.

To be eligible for the U.S. Amateur, a bowler must not hold or have held a professional membership (PBA or PWBA) in 2017. Also, anyone who has won a professional title (regional, national or senior) as a professional was not eligible to compete as an amateur.

Bowlers age 20 or younger as of Jan. 1, 2018 were eligible for spots on Junior Team USA this week.