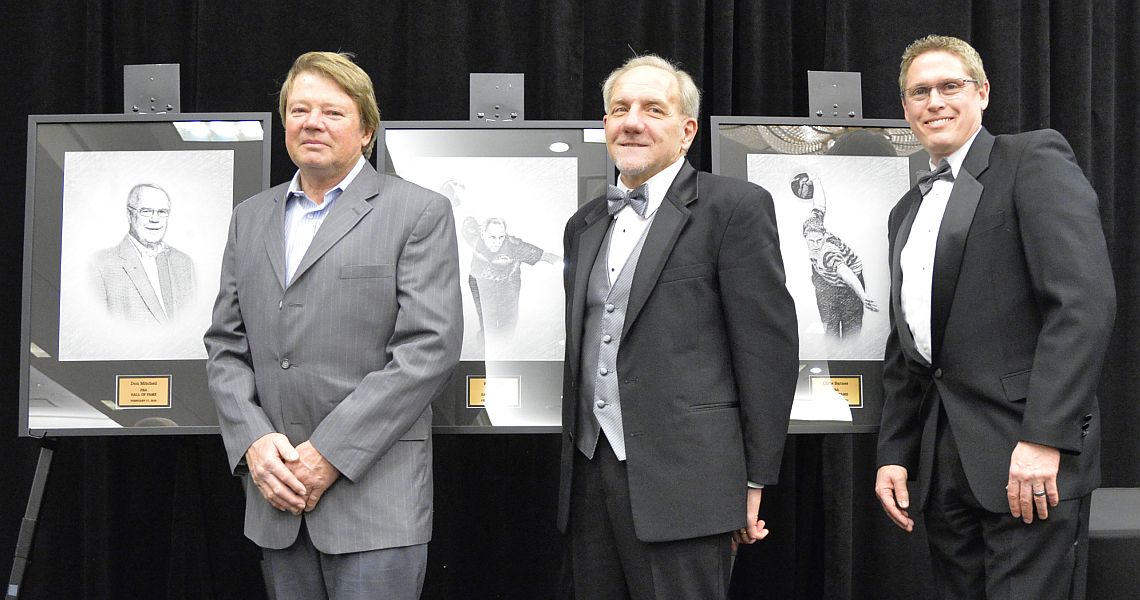 18 February, 2018
PBA News
2037
Ads
On the eve of the finals of the Go Bowling! PBA 60th Anniversary Classic finals at Woodland Bowl in Indianapolis, a crowd of more than 300 PBA fans, industry leaders and members of the bowling news media gathered at the Marriott North for the PBA 60th Anniversary Celebration Dinner to recognize the PBA’s three newest Hall of Famers – Chris Barnes, Ron Mohr and the late Don Mitchell; its 2017 award winners and to officially begin a year-long celebration of 60 years of professional bowling at its finest. 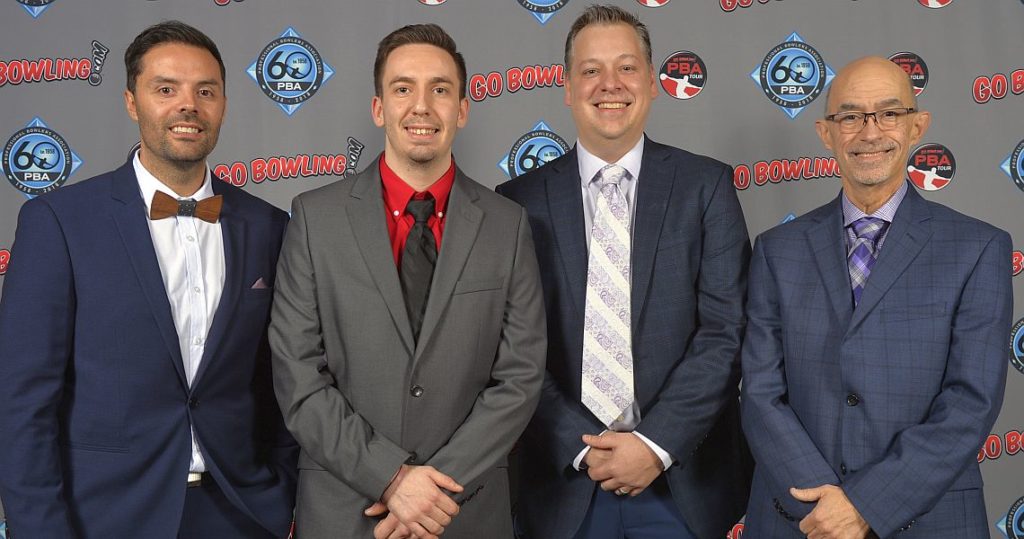 PBA Hall of Famer Del Ballard Jr. of Keller, Texas, who converted his own battle with tonsil cancer into a successful, ongoing “Ballard Vs. the Big C” fund-raising program, was selected as the recipient of PBA’s Tony Reyes Memorial Community Service Award.

“This is such an honor because Tony Reyes was close to me as his tour rep when he won his PBA title. This award is very humbling,” Ballard said. “All I did to earn it was supply the cancer. My wife and friends did the rest.”

Ballard’s life changed in May 2010 when he was diagnosed with tonsil cancer. One evening after a treatment, the 13-time PBA Tour titlist, wife Carolyn and a handful of friends got together at Ballard’s house and laid the groundwork for what would become “Ballard Vs. The Big C” – or BVBC for short. As of 2017, BVBC has raised in excess of $300,000 to carry out research on cancer treatments focused on the head, neck and throat.

Chris Loschetter of Avon, Ohio, was selected by his fellow competitors as the Steve Nagy PBA Sportsmanship Award winner.

“I bet 10 years ago a lot of didn’t think I’d win this award, but I’ve calmed down,” Loschetter said. “I’m in awe of how talented you guys are. Many of you should win this award, and I’m sure some of you will.

It’s been an amazing journey and I’m grateful you guys think I’m deserving. I’ll try to keep behaving myself on the lanes.”

Loschetter, a 37-year-old two-time PBA Tour champion, completed a nine-year quest for his first PBA Tour title in the 2012 Wolf Open in Milwaukee and won his second with the Merica Rooster Illusion team that won the 2016 PBA Team Challenge title while still in recovery from his own battle with cancer. Loschetter has been a member of the PBA League’s Philadelphia Hitmen since the program’s inception in 2013.

Matt Sanders, an Evansville, Ind., native now living in Indianapolis, was recognized as the 2017 Harry Golden PBA Rookie of the Year after winning two titles and leading a strong class of PBA rookies in both earnings and average.

“Just coming out here and living my dream is something special,” Sanders said. “I was lucky to have an awesome year and I loved every minute of it. Hopefully I can keep doing it.”

Sanders, a former two-time NAIA All-American with Marion University-Indiana, was the only rookie to win a PBA Tour title in 2017 (in the PBA Xtra Frame Billy Hardwick Memorial Open) and he concluded his first season with a fifth-place finish in the PBA World Championship.

For the fourth time in the past five seasons, Australia’s Jason Belmonte was recognized as the GEICO Chris Schenkel PBA Player of the Year.

“In my opinion this is the second greatest award a player can win behind being inducted into the hall of fame,” Belmonte said. “It isn’t something I take for granted; it inspires me to be better.”

Belmonte, after becoming the first player in PBA history to win three major championships among his four titles in 2017 and setting a PBA average record (229.39) in the process, was a landslide winner in Player of the Year voting. At age 34 he joined Mark Roth as a four-time winner of the award, trailing only Walter Ray Williams Jr.‘s seven POY Awards, and the late Earl Anthony with six.

Don Mitchell, the first hall of fame inductee, succumbed to cancer in 2012 at age 80. He went from managing a small bowling center in Indianapolis to developing the Royal Pin Leisure Centers chain, which has hosted dozens of showcase events at all levels of bowling.

Its centerpiece – Woodland Lanes on Indianapolis’ north side – has hosted every major championship the PBA has offered, which made it a natural choice to host the Go Bowling! PBA 60th Anniversary Classic.

Mitchell’s bowling center empire grew from one center in 1974 to multiple centers with more than 300 lanes and five pro shops. He was a vocal advocate for the PBA as the sport’s most prominent promotional vehicle, and he put his money behind his passions.

He was equally enthusiastic as a bowler, competing in 50 USBC Open Championships. He is the first bowling proprietor elected to the PBA Hall of Fame exclusively based on his role as a bowling center owner.

Following a video tribute from a number of players who were benefactors of Mitchell’s hospitality and dedicated, son David said, “I know Dad is looking down on us and smiling. We’re very appreciative of this award. Dad would probably say he was very proud to receive the award, but didn’t do much to earn it.

“Don Mitchell had bowling running through his blood,” David Mitchell continued. “He brought first-class bowling experiences to the bowlers of Indianapolis. If you asked bowlers on tour about their favorite bowling center, many of them would say Woodland Bowl. I know the recognition he’s receiving tonight would make him burst at the seams. It’s a great honor.”

Ron Mohr was a late starter. The Fort Wayne, Ind., native moved to Alaska at age 23 and got a job in a bowling center in Anchorage. He began dating a girl whose father worked for the FAA at the time President Ronald Reagan fired all of the striking air traffic controllers who refused his order to return to work. Mohr wound up working as an air traffic controller in Alaska for 25 years.

He also had a chance to develop bowling skills and in 1988 earned a berth on Team USA, where he got his first taste of elite level competition. When he retired from his air traffic controller position in 2008, he decided to try the PBA50 Tour.

In his breakout season in 2009, Mohr won three of his nine career PBA50 Tour titles en route to his first POY award (he won again in 2011). In nine full seasons as a “senior” bowler, he has finished in the top 10 in earnings and averages each year, and has never had a season averaging below 220. He currently is the two-time defending PBA60 Player of the Year.

In presenting Mohr, his friend and fellow PBA50 competitor Mike Dias said, “Ron’s workout regime is legendary. He does 45 consecutive minutes of sit ups every day. I get so tired watching, I have to get a drink. But Ron bowls like he works out. He puts everything he has into every shot.”

“Wow. What an incredible journey. Induction into the PBA Hall of Fame is an individual honor, but it doesn’t happen by yourself,” Mohr said, recognizing the many friends and industry associates who played a role in his career. He also thanked PBA Hall of Famer Marshall Holman, “my role model who showed me that intensity and passion can make great things happen.”

Of Walter Ray Williams Jr. Mohr said, “he showed me the desire to win doesn’t diminish with age.” And of Parker Bohn III: “he shows us all the world would be a better place if we all had a little bit of Parker Bohn in us.”

Chris Barnes, an 18-time PBA Tour title winner, was a consensus selection. He was a late-comer to PBA competition an All-America career at Wichita State University, a starring role with Team USA and a prolific nine-year career as a “professional amateur,” finally joining the PBA just before his 28th birthday.

The Kansas native, now living in Double Oak, Texas, is one of five players to win both PBA Rookie and Player of the Year honors, and one of six players to complete the PBA Triple Crown (2005 U.S. Open, 2006 PBA Tournament of Champions and 2011 PBA World Championship).

Now 47, and he ranked among the top 10 in PBA earnings for 16 consecutive seasons, surpassing the $1 million milestone in career earnings in a then-record 170 events.

“When Chris called me to present him into the PBA Hall of Fame, I began to wonder what you had to do to get in,” said former PBA star and Barnes’ personal coach, Mark Baker. “There are a number of boxes to check off, and Chris checked them all.”

Baker said the first time he worked with Barnes, he asked Baker for help and Baker answered, “No thanks, I’m good.” Barnes asked, “What do you mean?” Baker responded, “You’re the best player in the world, I don’t want to screw you up.”

“It’s great to think my name will be among the greatest our sport has known, but nothing happens on its own,” Barnes said. “Looking back, I never thought of myself as a great player, but I kept driving myself to find out what was wrong and how I could fix it.

“I’ve probably received more help from coaches than anyone else in this room, mostly because I needed it,” he added. “It’s been a life-long goal to stand up here tonight, to be able to stand atop the mountain, so thank you very, very much.”

The Go Bowling! PBA 60th Anniversary Classic weekend concludes Sunday with live ESPN coverage of the stepladder finals at Woodland Bowl at 1 p.m. EST. Finalists include No. 5 Shota Kawazoe of Japan; No. 4 Matt Sanders of Indianapolis; No. 3 Keven Williams of Springfield, Mo.; No. 2 Marshall Kent of Yakima, Wash., and No. 1 Jakob Butturff of Tempe, Ariz.