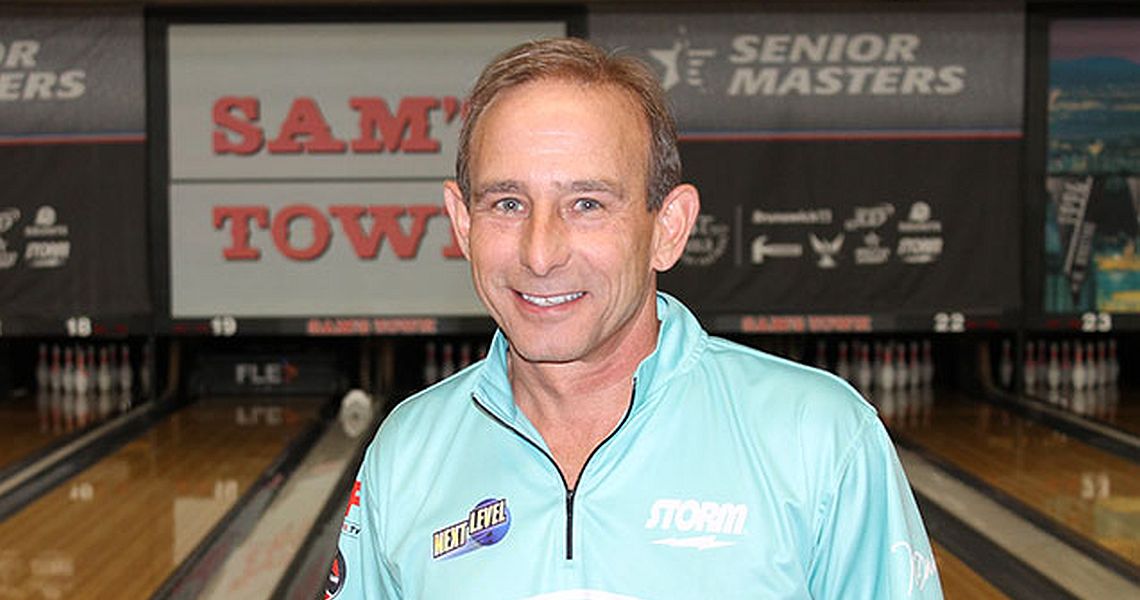 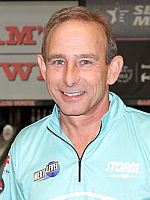 Instead, he has multiple games, and the key to picking the right one is paying attention to what the lanes are telling him, a practice that has earned him a reputation as one of the world’s most versatile bowlers and helped him secure the top seed for the stepladder finals of the 2018 USBC Senior Masters.

The 54-year-old right-hander (featured photo) averaged nearly 238 at the Sam’s Town Bowling Center in Las Vegas on the way to a 6-0 record in the event’s double-elimination match-play bracket, and he locked up the No. 1 seed Saturday with a 706-660 win against 2017 PBA50 Rookie of the Year Michael Haugen Jr. of Phoenix. 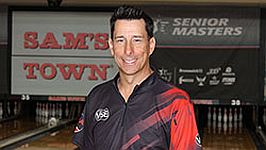 Haugen (left) will enter the stepladder in the second position, and he and Duke will be joined by No. 3 Keith Lesko of Prosper, Texas, No. 4 Chris Warren of Grants Pass, Oregon, and No. 5 Ron Mohr of nearby North Las Vegas, Nevada.

The championship round will be broadcast live on BowlTV on Sunday, beginning at 1 p.m. Eastern, with the winner taking home a $20,000 top prize and the second major title of the 2018 PBA50 season.

“I’m very happy with how things went, as this is what we work for and train for,” said Duke, owner of 38 PBA Tour titles and four PBA50 wins. “And, yes, I’m in the enviable position, but I haven’t won anything yet. There’s still work to do.”

Duke considers his opening match Saturday morning against Michael Calvin of Warren, Michigan, to be the most pivotal moment of the week for him because it was close throughout and came down to the final frames.

The win tested him both mentally and physically and set the tone for the rest of the day.

“I know that match was the one that got me here,” Duke said. “It came down to the ninth and 10th, and while I was on the approach, I told myself, ‘Norm, this is what major championships are about. You either rise now in the middle of this, or you may not last to the end.’ I was able to lift myself and finished out strong to get that victory.”

Duke noted that in the matches that followed, his opponents struggled early, and he was able to put together some big games, allowing him to build a lead from the start.

That’s exactly how his meeting with Haugen went. Duke started with a 257 game, while Haugen finished with 178, a deficit he could not recover from, despite responding with a 269 effort the following game.

Haugen is the frontrunner in the 2018 PBA50 Player of the Year race after winning the PBA50 Johnny Petraglia BVL Open presented by Brunswick in early May.

“I’m happy to be on the show, but now I have to win two games to win the title, and I’d definitely have to bowl Norm again to do it,” Haugen said. “But, if you want to be the best, you have to beat the best, and he’s one of the best in the world. I’ll bring my game tomorrow and try to get it done.”

Before getting a shot at redemption against Duke, Haugen will have to face one of the other three talented players who made the stepladder.

Lesko, Warren and Mohr (right, l-r) emerged from a four-player shootout round Saturday that featured the last players in the Elimination Bracket.

Lesko, a 52-year-old right-hander competing in his first major of any kind, finished the three-game match with a 279 effort, including a rolled 2 pin late in the game, to catapult from third place after two games, to the top spot in the shootout with a 732 set.

Warren followed with a 724 series, while Mohr grabbed the final spot with 722. Mohr held a slim lead over Warren after two games, but a fourth-frame washout in the finale proved to be the difference. PBA titlist Darryl Bower of Middletown, Pennsylvania, finished fourth in the shootout with a 609 series and was eliminated, finishing sixth overall at the event.

Warren, a six-time PBA Tour champion who is seeking his first PBA50 title, had the most noteworthy run in match play this week, having won seven consecutive matches in the Elimination Bracket, just to earn a spot in the shootout round.

Shortly after receiving an award Friday for having the highest block in the third round of qualifying, the 54-year-old right-hander lost his first match, 511-501, to the No. 56 seed, Jerry Smith of Englewood, Colorado.

Over his next 24 games at Sam’s Town, Warren averaged 251, rolled an 847 in a victory over Noel Vazquez of Sacramento, California, and used the second perfect game of the 2018 event to outlast and eliminate defending champion Walter Ray Williams Jr. of Oxford, Fla., 772-756.

Williams (left), who was looking to become the first bowler in more than a decade to win the Senior Masters in consecutive years, as well as become the event’s first three-time winner, finished in a tie for ninth place. His first loss came to Lesko in the Winners Bracket.

If Warren or Duke can win the 2018 Senior Masters, the victor would add his name to the short list of bowlers who have won both the USBC Masters and Senior Masters. Only Dave Soutar and Williams have achieved the feat, with Williams winning each one twice. Warren is the 1990 Masters champion, while Duke claimed the title in 1993.

Duke also has his sights set on a bigger prize – a second PBA50 Player of the Year Award.

“There’s a couple things I’m thinking about, and the first is player of the year,” said Duke, who won the award in 2014. “I’m always thinking about that, and the longer you can stay in that race, the better. There are some really good players with titles already. I have a second and a third place, but you have to win to win player of the year. The second thing is the majors. When people look over your career at the end, they’re going to look there first, and I want make sure I represented myself well.”

The Senior Masters is the premier event for USBC members age 50 and older, and the 2018 edition featured 272 entries. All competitors bowled 15 games over three days to determine the 63 bowlers who joined Williams in the double-elimination match-play bracket. All rounds of qualifying and match play were broadcast live on BowlTV.

For complete standings or more information on the Senior Masters, click here.

Winner earns No. 1 seed for Sunday’s BowlTV finals; loser is No. 2 seed

Three highest scores advance to Sunday’s BowlTV finals, high score is No. 3 seed, second high is No. 4, third high is No. 5, lowest score is eliminated, earns $4,500