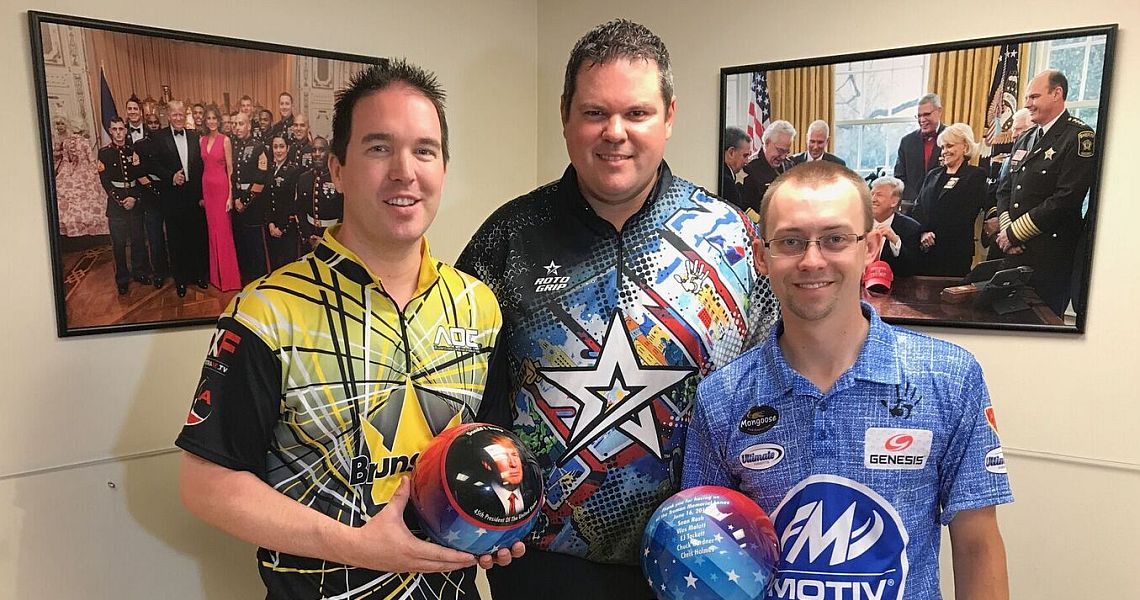 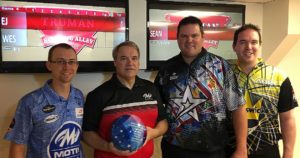 Thanks to more than a little help from a PBA member with government insider connections, PBA stars EJ Tackett, Sean Rash and Wes Malott got a chance to bowl on the Harry S. Truman Bowling Alley in the White House complex recently.

PBA member Chris Holmes (second from left), who works for the U.S. Department of the Interior, was asked by another government friend if Holmes would show his staff what “real bowling” looks like…so Holmes figured that would be a great chance to get some real bowlers to lend a hand.

Above from left to right: Sean Rash, Wes Malott and EJ Tackett. 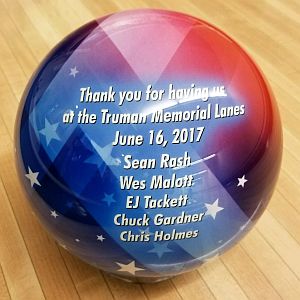 After getting appropriate approvals, Holmes invited Tackett through MOTIV, Rash and tour rep Chuck Gardner through Brunswick and Malott through Roto Grip to visit the White House lanes.

Under the condition that the players’ visit would remain confidential until after the fact, the players got a chance to bowl and discuss the sport with a few members of the White House Office of Science and Technology Policy while Holmes shot some video and recorded some interviews.

Some of Holmes’ content aired on WUSA-TV in Washington, D.C. Each of the players also will have access to some of the content for their own social media outlets.

Xtra Frame’s exclusive video streaming action continues this week with the Nationwide PWBA Rochester (N.Y.) Open, Friday and Saturday, and then the PBA50 Tour begins the final leg of its 2017 season in the South Shore Open from Hammond, Ind., July 25-27; the XF Striking Against Breast Cancer Mixed Doubles from Copperfield Bowl in Houston, Texas, July 28-30, which will award PBA and PWBA Tour titles; and the PBA50 Dave Small’s Championship Lanes Classic from Anderson, Ind., July 30-Aug. 1.

All of the PBA Regional managers have demonstrated some bowling skills over the years, but they all have set their PBA aspirations aside and no longer compete in PBA competition to avoid any conflicts of interest.

But when opportunities outside of the PBA are available, some of them still like to lace up their shoes and get their competitive juices flowing, like PBA Southwest Region Pete McCordic (pictured) of Katy, Texas, did in the Bowlers Journal Championships presented by USBC earlier this week.

McCordic, a two-time PBA Tour titlist who bowled a nationally-televised 300 game during his peak playing days, returned to South Point Bowling Center in Las Vegas Monday and claimed the lead in Senior Singles Tuesday with an 812 series.

McCordic and partner Les Shirwindt also missed taking the Senior Doubles lead by a single pin. McCordic had a 745 series and Shirwindt 670 for a 1,415 total, one pin shy of the 1,416 rolled earlier by Robert Brown of Cody, Wyo., and Billy Langford of Lone Grove, Okla.

The “BJ” and the USBC Open Championships end Saturday. 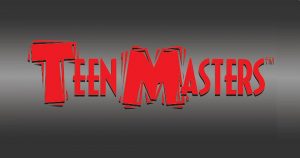 Leiendecker ran away with the girls’ title, winning her division and a $6,000 scholarship by 221 pins over Crystal Elliott of Melbourne, Fla.

After 24 qualifying games, Leiendecker was in fourth place, 121 pins behind leader Natalie Koprowitz of Girard, Ill., but she closed her first match play round with a 279 game and then rolled games of 300 (the first perfect game ever by a girl in Teen Masters competition), 233, 220, 168, 200 and 200 to establish a huge lead.

She finished the event with a 13-5 match play record and 8,867 total pins. Mabel Cummins of Elburn, Ill., the 2016 U14 winner, finished third; Koprowitz was fourth and Adrianna Stacy of Sebring, Fla., rounded out the top five. 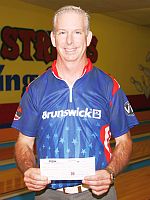 The Cecil Raymond tournament, which began in 2004, was renamed in 2014 to honor Raymond after he passed away in January 2014. Raymond was the 2013 recipient of the East Region’s Pat Patterson Award for outstanding contributions to the region.

On Tuesday, one day after entries opened for the GEICO PBA World Series of Bowling IX, set for Nov. 7-19 at the National Bowling Stadium in Reno, reservations have already been received from eight countries, including the U.S.

Entries, or intentions-to-enter, have been received so far from Norway, Denmark, Australia, Canada, Malaysia, Bahrain and Colombia. 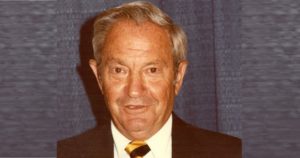 Rudo, who got his start in bowling as a laborer constructing lanes in 1938, advanced through the ranks to become president of the Brunswick Bowling Division in 1965 and spearheaded the introduction of Brunswick’s first automatic scoring system two years later.