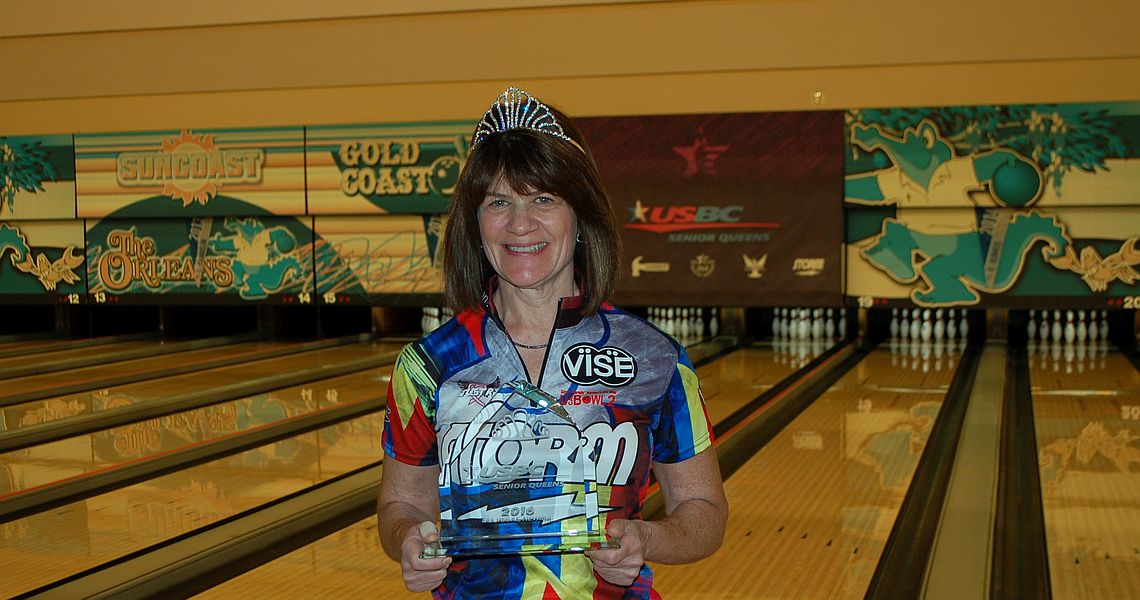 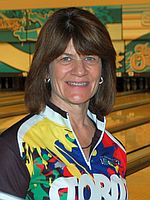 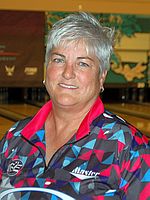 Romeo (pictured left and above) bested fellow hall of famer Tish Johnson (right) of Colorado Springs, Colorado, in the title match, also for the third consecutive time, in dramatic fashion, 198-195, to take home the $3,000 top prize.

Romeo did not deliver her first strike of the championship match until the ninth frame but stayed clean and had the opportunity to throw a double in the 10th frame to shut out Johnson.

She connected on the first shot but failed to get the second, which gave Johnson the chance to win and force a second game for the title. Since the USBC Senior Queens utilizes a true double-elimination format, top-seeded and undefeated Romeo would’ve had to be beaten twice.

“I think the ball I was using was burning up and losing energy, so I thought I could make adjustments with my hand and feet, and I kept fiddling back and forth,” said Romeo, who defeated Johnson, 619-600, to earn the top seed for the stepladder.

“I jumped two right with my feet in the 10th because I knew I had to get the ball to finish in the pocket. I rolled it off my hand, and it reacted perfectly. I knew if I got the second one, I would shut her out, and after I missed, I really thought we were going to bowl another game.”

Johnson needed to double to secure the win but left her third 10 pin of the match on her first offering. The 2016 event marked the fourth consecutive year Johnson has finished in the runner-up position. 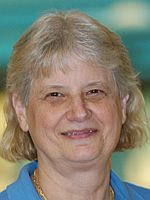 Last year, Romeo became the first player in Senior Queens history to successfully defend her title, and she now joins USBC Hall of Famer Sandra Postma (left) as the tournament’s only three-time champions.

“All of my matches were tough today, and I think that helped me stay focused and not give anything away,” Romeo said. “To think about winning three in a row is crazy. I’m still in shock.”

Johnson made her fifth consecutive stepladder appearance at the event and defeated Australia’s Robyn Flynn in the semifinals, 222-167, to advance to the title match. 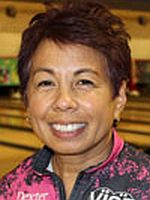 Flynn edged Karen Barcal of Albuquerque, New Mexico, in the second match of the stepladder, 209-193, while Barcal kicked off the championship round with a win over 2011 Senior Queens champion Paula Vidad (right) of Sun City, California, 202-169.

A four-player shootout round determined the No. 3, No. 4 and No. 5 seeds for the stepladder, and that came down to the final frame as Flynn delivered a 279 game to jump from being the first player out to the third seed with a 660 three-game total.

Barcal fired 641 to earn the fourth seed, and Vidad snuck into the fifth spot with 623 after Australia’s Jeanette Baker delivered a six-count on her fill ball to finish sixth with 622. 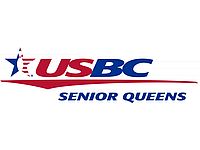 All competitors at the 2016 Senior Queens bowled 15 games of qualifying over two days to determine the 31 players who would join Romeo in the double-elimination match-play bracket. Match play consisted of three-game matches with total pinfall determining who advanced.

For more information on the USBC Senior Queens, click here.

Winner earns No. 1 seed for stepladder; loser is No. 2 seed

Three highest scores advance to stepladder, high score is No. 3 seed, second high is No. 4, third high is No. 5, lowest score is eliminated, earns $700