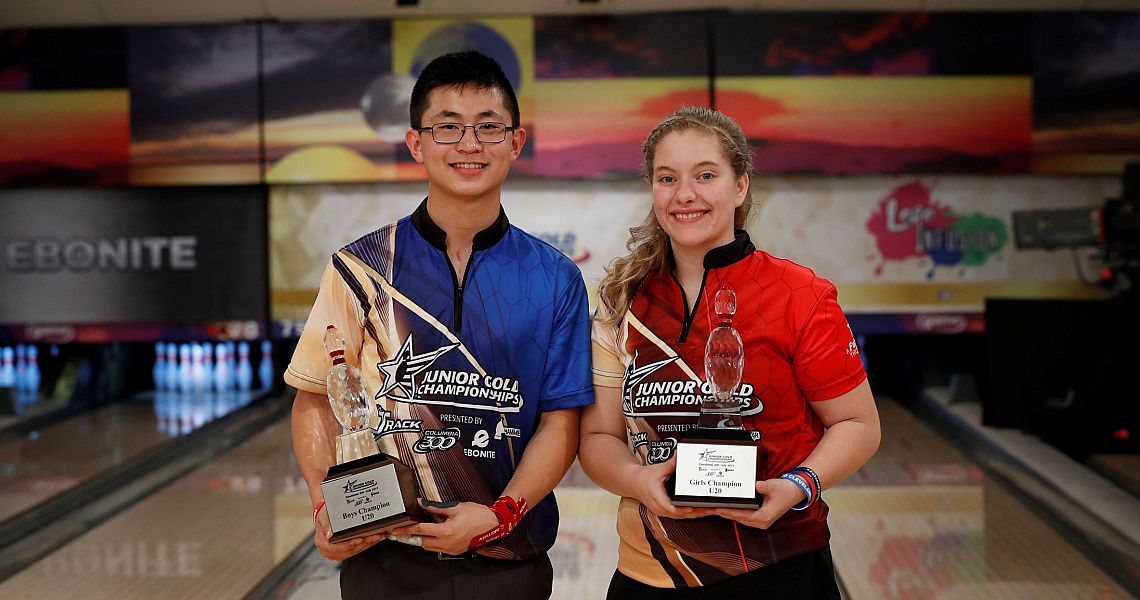 09 August, 2017
Youth
3231
Ads
Wesley Low Jr. of Palmdale, California, and Allie Leiendecker of Wooster, Ohio, find themselves at different stages of their youth bowling careers, but each are ready for the next step after winning the 20-and-under titles at the 2017 Junior Gold Championships presented by the Brands of Ebonite International.

Low (above left), 20, capped off his youth career with a second U20 boys title after defeating David Hooper of Greenville, South Carolina, 394-357, at Game of Wickliffe. Leiendecker (right), a 16-year-old right-hander who made her debut in the U20 division this year, averaged 230 in her two-game total-pinfall match against Caitlyn Johnson of Lumberton, Texas, to claim the U20 girls title, 460-379.

The championship round in each division aired nationally on CBS Sports Network on Tuesday.

Low jumped to a commanding lead against Hooper after rolling strikes on five of his first seven deliveries, but the left-hander had back-to-back 2-4-7-10 splits in the ninth and 10th frames that cut his advantage to 34 pins after the first game, 202-168.

Although Low still was making adjustments in Game 2, he maintained his lead and sealed the title after recording a double in the eighth and ninth frames on his way to a 192-189 finish.

“I thought both of those shots were pretty good, but that’s when I noticed that the fronts were starting to hook,” Low said.

“Throwing a urethane ball with such a high surface, you expect that to happen at some point. I began making small moves to the right, since I didn’t want to do something crazy. I ended up finding a good look on the left lane and gave the shot on the right lane in the ninth a little air time to make sure it got through the front part of the lane.”

Low recorded his first U20 title as a 16-year-old at the 2013 event in Detroit. After several close calls, including a runner-up finish in 2014, he finished his Junior Gold career by becoming the first player in the boys division to win two U20 titles.

“I think the distinction to be the first to win U20 twice is pretty special, especially when you look at the list of past winners,” Low said.

“After winning in 2013, my goal was to win twice. I lost to Tylor Greene in 2014, bowled myself out of the top 16 in 2015 and lost in the first round last year. Those three years served as motivation, and to come out a winner to end my junior bowling career is awesome.”

Leiendecker had been a consistent performer in her previous two trips to Junior Gold in the U15 division, advancing to the match-play portion of the event. In those two appearances, however, she was unable to secure a win in the double-elimination format.

Upon a return visit to match play in her U20 debut, she had one goal in mind.

“I had not won a match the past two years, so that really was the main goal heading into match play,” Leiendecker said. “When I was able to do that, things really started rolling, and I was able to stay calm and focus on what I was trying to achieve.”

In the title match, Leiendecker may have been nervous on the inside, but she looked like a seasoned veteran as she recorded a total of 16 strikes on her way to scores of 224-178 and 236-201 against Johnson.

Taking the title approximately 70 miles from home also served as a special moment for Leiendecker, having family and friends on-site at Game of Wickliffe to celebrate the performance with her.

“I was shaking a lot, but I felt like I kept everything under control,” Leiendecker said. “It was fun, though, even with the nerves. Moving up to U20, my goal was just to make the cut, so to win in my first year really is amazing. Being able to win in Ohio, with all of my supporters coming to watch, was pretty amazing, too.”

Six boys and six girls automatically earned spots on Junior Team USA for 2018 through their performances at Junior Gold this week.

Jeffery Mann of West Lafayette, Indiana, Kristopher Yadao of Pearl City, Hawaii, Pete Vergos of Apopka, Florida, Ryan Winters of Livonia, Michigan, and Michael Martell of Brooklyn, New York, earned spots on the boys team through qualifying, while Hooper also made the team by advancing to the championship round.

Mann, the 2016 U20 Junior Gold champion, and Vergos each are making their second appearances on the team, while Yadao, Winters, Martell and Hooper will represent Junior Team USA for the first time.

Johnson, Alexis Neuer of Lewisburg, Pennsylvania, Crystal Elliott of Palm Bay, Florida, and Julie Huren of Westland, Michigan, also made the girls team through qualifying, while Leiendecker earned her spot by making her way to the title match.

Leiendecker was part of the U15 Developmental Team in 2017, while Johnson, Neuer, Elliott and Huren will make their Junior Team USA debuts in 2018.

The U20 division of the 2017 Junior Gold Championships featured 1,418 boys and 840 girls, who each rolled 16 games across four bowling centers, before the top 203 boys and top 120 girls moved on to a five-game advancers round.

The top 64 boys and top 64 girls advanced to the final advancers round, with 26-game pinfall totals determining the top 16 to advance in each division to double-elimination match play, which also featured two-game matches with total pinfall determining the winner. 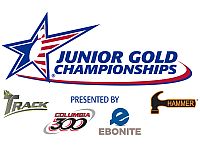 The Junior Gold Championships features the top youth bowlers in the country seeking national titles in three divisions – 12-and-under, 15-and-under and 20-and-under – and spots on Junior Team USA. The 2017 tournament was held in seven Cleveland-area bowling centers, featured a $320,000 scholarship fund, and more than 3,500 entries, both tournament records.

The finals of the U12 and U15 divisions also were taped at Game of Wickliffe on July 22 for delayed broadcast. The U12 finals aired July 25, while the U15 title matches aired Aug. 1.

The finals of the 2017 USA Bowling National Championships presented by Sixlets also were taped. The U12 finals will air Aug. 15 and the U15 finals will be shown Aug. 22, both at 7 p.m. Eastern on CBS Sports Network.

All advancers round and match play leading up to the TV shows were broadcast live on BowlTV. For more information on the Junior Gold Championships presented by the Brands of Ebonite International, click here.