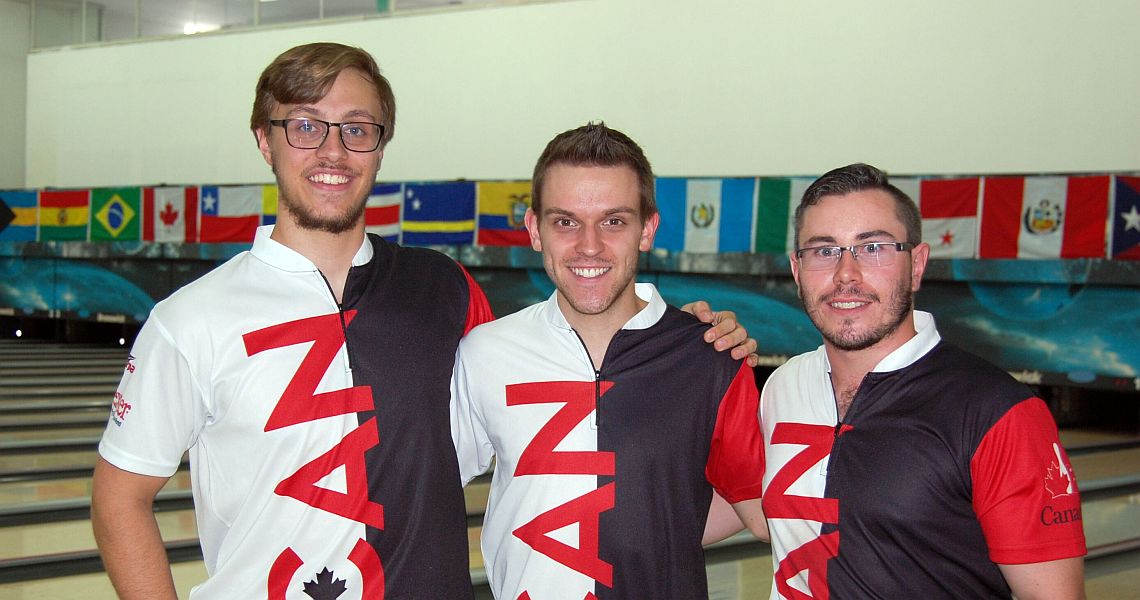 Zach Wilkins, Mitch Hupé and Francois Lavoie averaged more than 236 as a team on the way to a 4,255 six-game total, 76 pins better than the previous record of 4,179 posted by Bill O’Neill, Mike Fagan and Chris Barnes of the United States at the 2011 event in Guadalajara, Mexico.

Wilkins rolled five games over 240 at Bolera Departamental in Cali, Colombia, on Wednesday to lead his team with a 1,486 effort. Hupé and Lavoie, the doubles bronze medalists who both rolled perfect games this week, added 1,409 and 1,360 respectively. 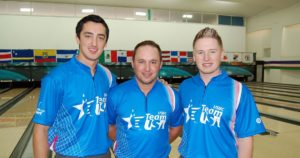 All three players doubled in the final frame to move past Mexico’s Arturo Quintero (1,333), Alejandro Montijo (1,325) and Andre Fors (1,229), who grabbed the bronze with a 3,887 performance, outdistancing Colombia’s Andres Gomez, Santiago Mejia and Manuel Otalora by 22 pins. 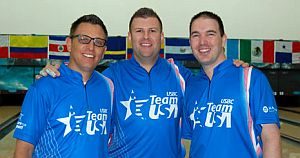 The gold medalists bowled on the day’s first squad, just a few lanes away from the Team USA trio of Sean Rash (right; 1,285), Rob Gotchall (left; 1,274) and John Szczerbinski (middle; 1,236), who were admittedly impressed with Canada’s performance on the 44-foot London oil pattern, while going on to finish eighth overall with a 3,795 total.

Rather than be discouraged by the performance, Rash and company used the block as an opportunity to continue learning the characteristics of the bowling center and how the lanes transition, especially as the amount of traffic increases from four on a pair in singles and doubles to six for trios and eventually 10 per pair for team competition, which begins Thursday.

Rash posted a record score Monday on the way to singles gold, and Szczerbinski claimed the silver medal. Szczerbinski then carried his momentum into doubles Tuesday, where he earned the gold medal with AJ Chapman, just 20 pins ahead of their teammates Marshall Kent and Ronnie Russell.

But, what has changed, if the oil pattern is the same for the duration of the tournament?<

“People are moving farther left as the week goes on, and we didn’t chase it fast enough,” said Rash, who led his team with a 1,285 trios set.

“We got tripped up in the transition, too, and just never got much going. Canada bowled extremely well today, and anytime you bowl next to someone shooting big numbers, it adds a little pressure. We didn’t bowl as well as we would’ve liked, but we’re still collecting as much info as possible before the start of the team event tomorrow.”

Team USA’s other trio of Kent, Russell and Chapman strategically were put together on the later squad for two reasons. The first simply to keep the bowlers who played the lanes similar together, and the second being because the guys who were able to play more direct have scored better earlier in the day this week.

Chris Barnes, who made the transition from player to assistant coach for this week’s event, had a unique perspective in seeing the trios record broken. At the same time, he, too, was taking mental notes.

“Canada put on an exhibition this morning, for sure, and found success with stronger, earlier-rolling covers and cores, while we went with the same game plan that worked so well for us the first few days,” Barnes said.

“Because of how we started this week, we probably stayed with the plan a little too long today. At the same time, Zach was doing some things today no one else had been able to do, Mitch continued to bowl well, and, Frankie, a shot maker, is always in the mix.”

Barnes also noted how well the champions handled the transition in Game 5, compared to the rest of the field, which really helped them separate themselves in the standings.

Now, Barnes and Bryan O’Keefe will look at the scores from the week and determine which five Team USA players will bowl the first team set when they take the lanes Thursday at 3 p.m. Eastern. The first squad of team competition gets underway at 11 a.m. EDT.

“The benchmark for making Team USA is how well you do different things, and we’ll need that flexibility moving forward,” Barnes said.

“We probably won’t change things too much, and it’s always good when people can play to their strengths. We’ve had a great week overall, and I feel like we’re in a pretty good mindset heading into tomorrow.”

The trios and team medal ceremonies will take place at Bolera Departamental on Saturday afternoon before the Masters semifinals. The top 16 bowlers in the all-events standings after 24 games (six games of singles, doubles, trios and team) will advance to the best-of-five match-play Masters bracket.

The 2016 PABCON Adult Championships includes more than a dozen countries, with more on the line than just gold medals.

The top eight men’s teams and top eight women’s teams will qualify for the combined 2017 World Championships in Kuwait. This will be determined by a combined total pinfall from the following categories in each division – top four singles scores, top two doubles scores, top trios set and pinfall in team competition.

The top two countries will qualify for the X World Games, which is held every fourth year and next will be contested in Wroclaw, Poland, in July 2017. This will be a combined pinfall total for the top two men and top two women for each country during the 24 games at the PABCON event.

The women hit the lanes at Bolera Departamental starting next Monday. 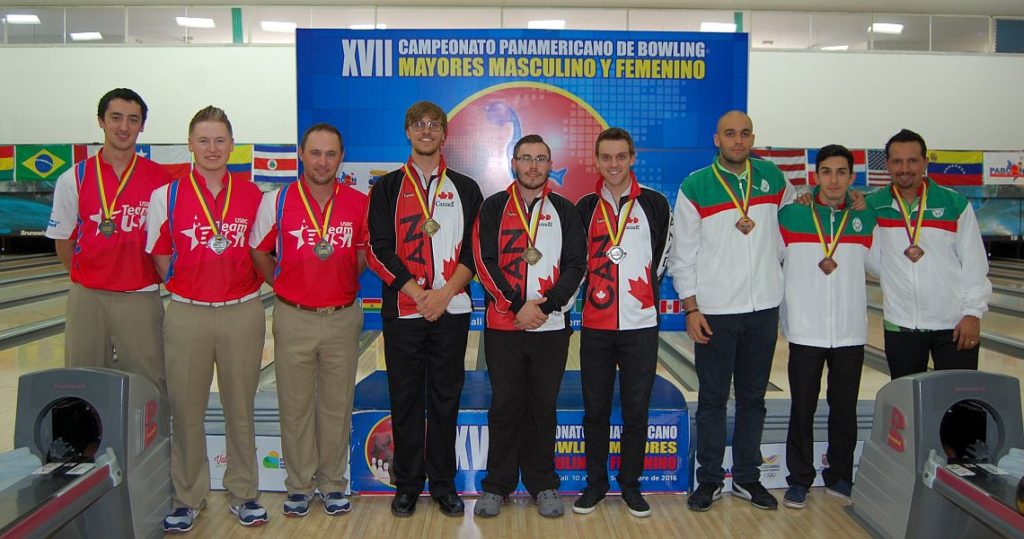