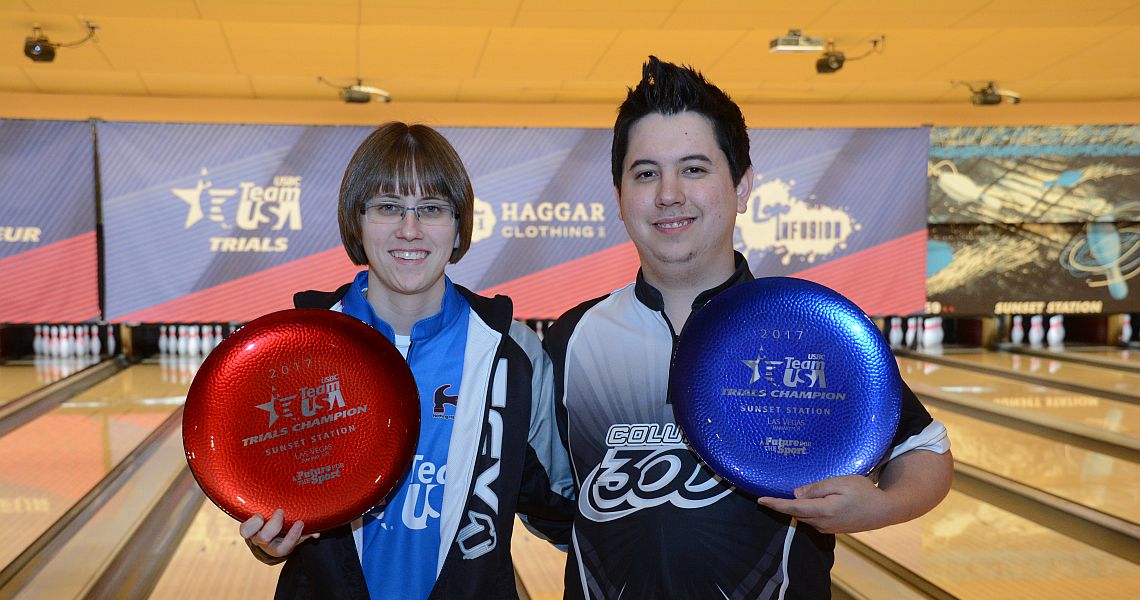 Erin McCarthy of Omaha, Nebraska, and Jakob Butturff of Tempe, Arizona, captured the 2017 United States Bowling Congress Team USA Trials titles Sunday, while Julia Bond of Aurora, Illinois, and Matt Russo of Millstone Township, New Jersey, closed the weekend with wins at the United States National Amateur Bowling Championships.McCarthy finished the event at Sunset Station’s Strike Zone Bowling Center in Henderson, Nev., with a 241 game, giving her a fifth-place finish in the final round and moving her into the top spot in the women’s standings with 46 total ranking points.Butturff had built a lead during the week’s first four rounds and used a 14th-place finish Sunday on the 39-foot Seoul oil pattern to collect the win with 59 ranking points.Pictured above are the 2017 Team USA Trials winners, Erin McCarthy and Jakob Butturff (l-r).
Ads
The players earned points based on their finishing positions in each qualifying round. The top bowler of the block earned one ranking point, second place earned two points, etc., with the lowest total of ranking points after the five six-game blocks determining the 2017 USBC Team USA Trials champions.

Shannon Pluhowsky of Dayton, Ohio, led Sunday’s final round, firing a 1,465 six-game block. Chris Via of Springfield, Ohio, paced the men’s field in the final round with a 1,478 total.

The women’s title came down to the final frame as McCarthy delivered a strike to move ahead of Shannon O’Keefe of O’Fallon, Illinois, and hold off a late run by Kelly Kulick of Union, New Jersey.

“I tried my best to not look at the scoreboard all week, so I didn’t know how close it was, which probably helped take the nerves away,” said McCarthy, who made Team USA for the third consecutive year.

“I went into that game focused on making good shots and the team. I’ve been battling some things with my swing since the U.S. Women’s Open and really worked hard the past two or three months trying to get it fixed. It really paid off this week, and I’m on cloud nine. Making the team again is a dream in itself, but I don’t know if this win will sink in for a couple of weeks.”

The victories also earned McCarthy and Butturff the opportunity to represent the United States at the 2017 QubicaAMF Bowling World Cup in Hermosillo, Mexico.

Also earning automatic spots on Team USA 2017 based on their overall performances at the Team USA Trials were O’Keefe, Kulick, Bond and Stephanie Zavala of Downey, California.

Missy Parkin of Laguna Hill, California, Sydney Brummett of Fort Wayne, Indiana, Kayla Johnson of Washington, Illinois, and Stephanie Schwartz of Racine, Wisconsin, were selected by the National Selection Committee based on their performances this week.

“Knowing you can handle the grind and deal with the pressure of winning this event against a very talented field of bowlers is a great feeling,” said Butturff, who is making his first appearance on Team USA.

“It’s amazing to be one of the few who gets the chance to represent this country and the sport of bowling.”

AJ Johnson of Oswego, Illinois, Nick Pate of Inver Grove Heights, Minnesota, Kyle King of Glendale, Arizona, and Chris Barnes of Double Oak, Texas, were selected by the National Selection Committee based on their performances at the Team USA Trials this week.

Via, AJ Chapman of Wichita, Kansas, Ronnie Russell of Marion, Indiana, Tommy Jones of Simpsonville, South Carolina, and Sean Rash of Montgomery, Illinois, were selected by the National Selection Committee based on submitted resumes. 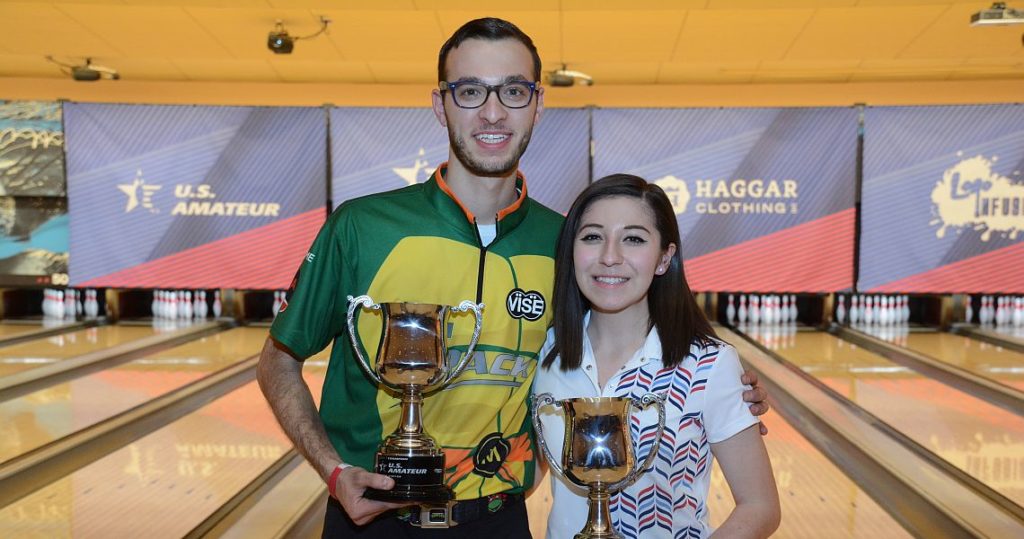 Making Team USA and winning the U.S. Amateur Championships marked the next big steps for Bond, a Junior Team USA member and collegiate standout at Nebraska.

She put together a clean game in the women’s U.S. Amateur final, but left an opening for Zavala to double in the 10th frame and capture the title. Zavala left the 2-4-10 split on her first offering as Bond collected the win, 229-204.

“It’s hard to put into words what all of this means,” said Bond, who also joined Junior Team USA for the fourth consecutive year. “It’s an honor to be a part of both teams, and winning the U.S. Amateur makes it even better. It was an amazing week.”

Zavala earned her spot in the title match by defeating Brummett in the opening match, 220-210.

Russo grabbed an early lead in the men’s U.S. Amateur final against Badovinac with strikes in five of the first seven frames. Badovinac was unable to strike on the left lane until the 10th frame, and Russo delivered an eight count on the first ball of his final frame to secure the victory, 212-197.

“All of the hard work really paid off this week, and I’m going home as a member of Team USA, Junior Team USA and as the U.S. Amateur champion,” said Russo, who earned a spot on Junior Team USA for the second consecutive year. “It hasn’t fully sunken in yet, but I know it will when I wake up tomorrow morning. I can’t even describe the feeling now.”

Badovinac advanced to the championship match after defeating Cortez Schenck of Phoenix in the semifinal, 266-190.

Lauren Pate of Inver Grove Heights, Minnesota, and Jessica Mellott of Lauderhill, Florida, were selected by the National Selection Committee based on performance.

Bond, Brummett, Heather Penatzer of Tucson, Arizona, Sierra Kanemoto of Riverside, Ohio, Adrianna Stacy of Sebring, Florida, and Haley Cummings of Huber Heights, Ohio, already earned their spots on Junior Team USA 2017 based on their performances at the 2016 Junior Gold Championships in Indianapolis.

Earning automatic spots on the boys’ side was Russo, Schenck, Brandon Biondo of Carpentersville, Illinois, and Bryan Hahlen of Greenwood, South Carolina.

Richard Paul III of Winton, California, and Briley Haugh of Faribault, Minnesota, were selected by the National Selection Committee based on performance.

Bowlers age 20 or younger as of Jan. 1, 2017 were eligible for spots on Junior Team USA this week.

Is this fair? Missy Parkin beats the field but finishes 7th at Team USA Trials »