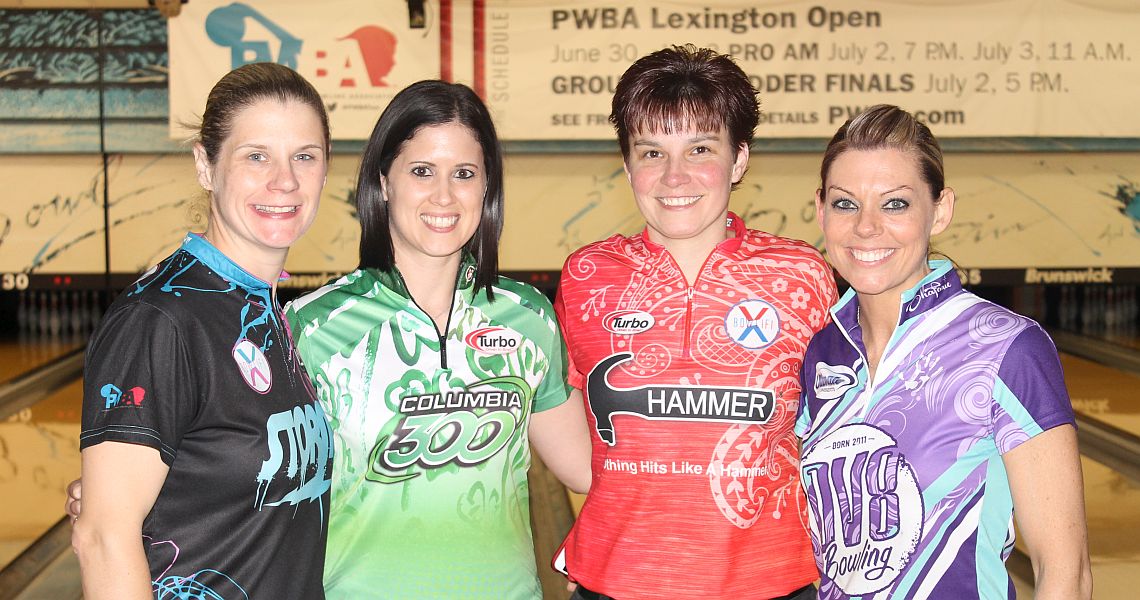 03 July, 2016
PWBA Tour
1775
Ads
When Kelly Kulick of Union, New Jersey, decides to hang up her bowling shoes and throw her last ball down the lane, she will look back on a successful career and be pleased with her performances.

But, what she might look back on the most, is her performance down the stretch at the Professional Women’s Bowling Association Lexington Open this weekend, while battling injury at Collins Bowling Center-Eastland.

Kulick used a 5-1 match play record to claim the No. 1 seed for the event’s stepladder finals, which will be taped Aug. 7 during the U.S. Women’s Open and air Tuesday, Aug. 16, on CBS Sports Network.

Kulick, who starred at Morehead State, about 63 miles from Lexington, struggled during the first six games of qualifying, averaging a little more than 182. Despite the early setback, the 39-year-old right-hander averaged 221 for the final 18 games, including a 225-206 position-round victory against Shannon Pluhowsky of Dayton, Ohio, to clinch the top seed.

“I graduated from Morehead State, which is an hour down the road,” said Kulick, who helped Morehead State capture the women’s title at the 1998 Intercollegiate Team Championships.

“I didn’t bowl well in Kentucky when I bowled the tour stop here, so I wanted to make a strong presence. I was slow out of the gates, but Churchill Downs must be my influence. Like Seabiscuit or Secretariat, I came back well down the stretch.”

Kulick has been battling an ankle injury for the last month and even missed the PWBA Greater Detroit Open to receive proper treatment. Although she continues to deal with pain during competition, there is no quit in the six-time major champion.

“The ankle is not 100 percent, but I feel like I can still be competitive,” Kulick said. “I’m going to go home and take the necessary medical precautions I need to get it back for a strong finish in the final two or three weeks. Player of the year was one of my ultimate goals, but I may have to put that on the backburner for a little while.

“But, I don’t know how to quit. I wouldn’t want to push myself beyond injury to cause further pain, but my mom taught me the one thing you don’t do is quit. If you start something, you have to finish it. It’s the only way I know.”

The state of Kentucky has provided many outstanding memories and lessons for Kulick, but perhaps, most importantly, she learned how to stand on her own two feet and begin the trek to hopefully becoming the best woman bowler ever.

Bryanna Coté of Red Rock, Arizona, earned the No. 2 seed for the televised finals and will be in search of her first career PWBA title when she steps into the bright television lights.

“It’s a dream come true,” said Coté, who was a four-time National Tenpin Coaches Association Player of the Year at Central Missouri.

“All week, I was just trying to focus on making good shots and making sure I trust it because the shot was not very easy. I told myself during the last game to bowl the best game I could, and whatever happens, happens. I’m just very grateful I bowled well enough to make the show.”

Pluhowsky will make her fourth TV appearance of the season after defeating Colombia native Rocio Restrepo in the Group A stepladder final, 201-188. Restrepo advanced to the final after knocking off Erin McCarthy of Omaha, Nebraska, 219-179.

The fourth and final TV spot went to Shannon O’Keefe of O’Fallon, Illinois, who defeated Missy Parkin of Laguna Hills, California, 239-214, in the Group B stepladder final. Parkin defeated Diana Zavjalova of Latvia, 223-181, to advance to the final match.

Saturday’s competition kicked off with a six-game block that narrowed the field from the 32 cashers to the top 12 players for round-robin match play. The 12 finalists were split into two groups of six for match play, which consisted of six games including a final position round.

The competitor with the highest pinfall total in each group earned a spot in the TV finals, and the next three highest in each group advanced to the group stepladder. All qualifying and match-play rounds were broadcast live on Xtra Frame, the exclusive online bowling channel of the Professional Bowlers Association.