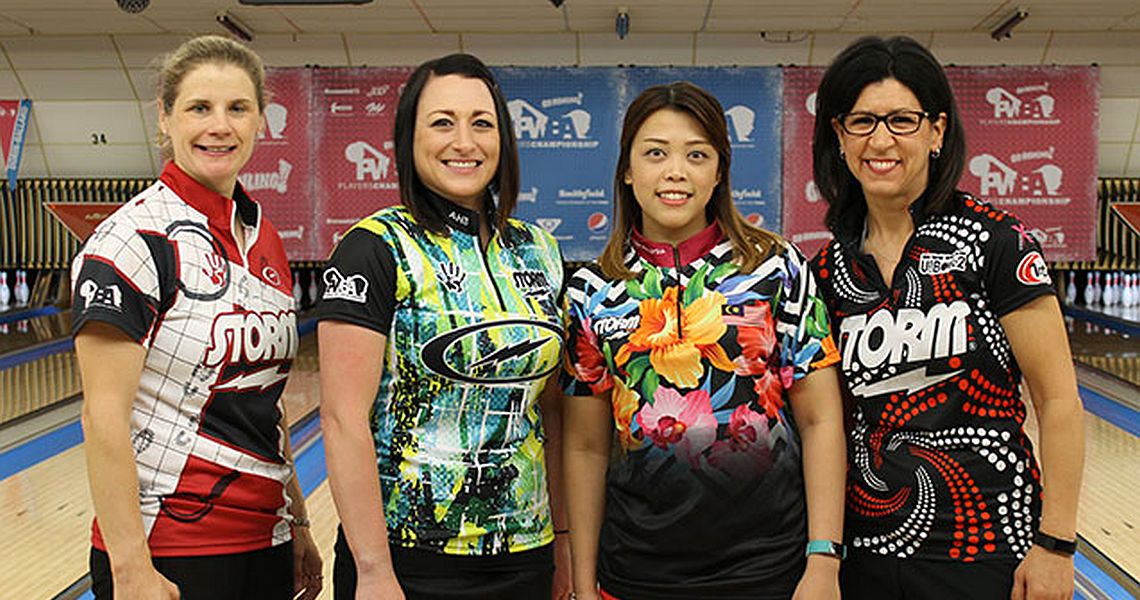 25 June, 2017
PWBA Tour
2002
Ads
Since the return of the Professional Women’s Bowling Association Tour in 2015, Kelly Kulick of Union, New Jersey, and Liz Johnson of Deerfield, Illinois, have combined for nearly 30 championship-round appearances, and they’re among the four finalists at this week’s 2017 Go Bowling PWBA Players Championship.

Kulick, a 40-year-old right-hander, posted an 11-7 match-play record at The Ashwaubenon Bowling Alley in Green Bay, Wisconsin, and catapulted to the top seed for Sunday’s live TV finals with an 8,064 total for 36 games, including 30 bonus pins for each win in match play.

Johnson earned the fourth seed for the show, which will air on CBS Sports Network at noon Eastern, and now has qualified for the finals in six of the season’s eight tournaments.

Johnson finished with a 7,966 total, 20 pins ahead of rookie standout Brittany Smith of Johnston, Iowa.

Kulick has been known to enjoy and excel in the longer event formats, and this week’s oil pattern, which will be revealed on Sunday’s show, allowed her to play to her strength – moving left and throwing the ball to the right.

She also feels like she’s getting sharper, both physically and mentally, as the season goes on, especially after recently picking up her first victory since the 2015 relaunch of the PWBA Tour, despite a combined 10 championship-round appearances in 2015 and 2016.

“Finally getting a win really meant a lot and definitely was very emotional for me,” said Kulick, who won the PWBA Fountain Valley Open. “It’s nice to see the momentum continuing, and I’ll do everything I can to finish this off tomorrow. I saw two pictures all week, and I’m hoping things come into focus quickly for me in the six practice shots I get before my match on the show.”

In the three years The Ashwaubenon Bowling Alley has played host to the PWBA, Johnson has been the player to beat.

The United States Bowling Congress Hall of Famer won the USBC Queens there in 2015 and was the runner-up to Colombia’s Clara Guerrero at the 2016 Go Bowling PWBA Players Championship.

“I guess it’s a combination of things that have helped me be successful here,” said Johnson, the two-time reigning PWBA Player of the Year. “There’s a great atmosphere here in Green Bay, and there’s just something about the long format of the majors. It took a little more patience for me this week, but I got there. I know it will be tough to climb the ladder, but I’d be OK if tomorrow turned out to be a really long day of bowling.”

Following the live finals of the PWBA Players Championship, three additional shows will be taped for delayed broadcast on CBS Sports Network.

The finals of the PWBA Wichita Open, Pepsi PWBA Lincoln Open and PWBA Greater Detroit Open will be taped for broadcast on July 4, 11 and 18, respectively.

Johnson and Safiyah both will appear on the Wichita Open show, while Johnson and Kulick will face off in the opening match of the Lincoln Open stepladder.

Boomershine, who had a runner-up finish on the PWBA Tour in 2016, has competed in just three events this season, following the birth of her son, Aiden, and a nagging knee injury.

After locking up the top seed Saturday at The Ashwaubenon Bowling Alley, Kulick immediately thought of her mother, who died in December, but hasn’t been far from her thoughts.

“I still miss my mom and wish I could call her to tell her about the things I’ve accomplished,” Kulick said. “I wear her wedding band on my finger, so I know she’s with me always, and I know she’d be proud. Things have been tough, but I have a great support system, and I’m happy with the direction things are going.”

All 67 competitors at the 2017 Go Bowling PWBA Players Championship this week bowled 18 games of qualifying over two days to determine the 18 bowlers who advanced to round-robin match play.

All rounds of competition leading up to the stepladder finals of the 2017 Go Bowling PWBA Players Championship were broadcast on Xtra Frame, the exclusive online bowling channel for the Professional Bowlers Association. For subscription and schedule information click here.