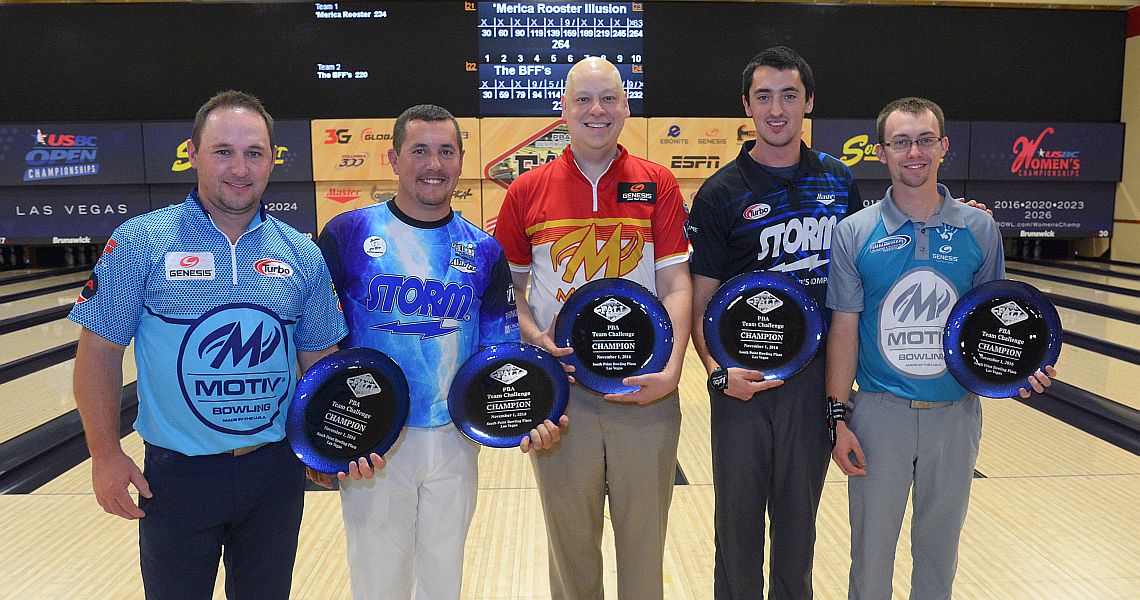 02 November, 2016
PBA National Tour
2244
Ads
After scratching its way into the championship round, the team calling itself ‘Merica Rooster Illusion threw nine strikes on 10 attempts to win the Professional Bowlers Association Team Challenge at the South Point Bowling Plaza in Las Vegas Tuesday. 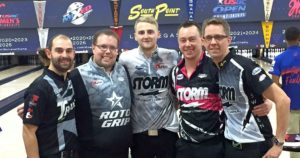 The team, named after a reference found in the movie “Tropical Thunder,” knocked off The BFFs (pictured), the top qualifying team composed of veteran international players Dom Barrett and Stuart Williams of England, Martin Larsen and Jesper Svensson of Sweden, and Finland’s Osku Palermaa, 498-452, in the two-game, total pinfall final game. ‘Merica locked it up with its strike barrage in a 264-232 clinching game.

“We’re a team of journeymen and young guys, all of whom can throw strikes when you need them,” team captain Ronnie Russell said.

Russell, who won his fourth career PBA Tour title along with a share of a $30,000 first prize, was joined by former PBA Rookies of the Year Marshall Kent (2014), E.J. Tackett (2013), Rhino Page (2008) and veteran Chris Loschetter, who bowled after being cleared by doctors in his battle with cancer.

“It really wasn’t about Losch and cancer,” Tackett said. “Losch is Losch. He doesn’t change, but when he got cleared to bowl, that’s what we wanted to do for him. To get a win after what he’s been through really makes it special.”

Loschetter, who earned his second PBA Tour title, also took it in stride. He was diagnosed with testicular cancer just before the GEICO PBA World Series of Bowling VII in Reno last December, had surgery, and thought he was cleared until the cancer resurfaced in his abdomen during the summer. After another bout of chemo, he was declared clear in early October.

The PBA Team Challenge is a one-of-a-kind five-player team competition for the sport’s most talented players. It was conduct as part of the South Point Bowling Plaza Fall Classic.

‘Merica Rooster Illusion then broke open a five-pin match with a string of six consecutive strikes to win the semifinal match, 482-452, eliminating the highly-regarded all-star team, One College POY and You Know the Rest (Chris Barnes, Bill O’Neill, Tommy Jones, Wes Malott and Jason Belmonte). The “POY” team represented a combined total of 64 PBA titles, by far the most in the entire 20-team tournament field.

PBA members will now join many of the sport’s top amateur players in the U.S. Open which begins Friday at the South Point Bowling Plaza. All qualifying and match play rounds of the U.S. Open will be covered live, exclusively on PBA’s online video-streaming service, Xtra Frame, leading up to the live CBS Sports Network stepladder finals on Tuesday, Nov. 8, at 8 p.m. ET (5 p.m. PT).

In addition to its normal coverage, Xtra Frame’s coverage also will include bonus coverage of featured groups of players on its new XF2 channel. For details, click here. 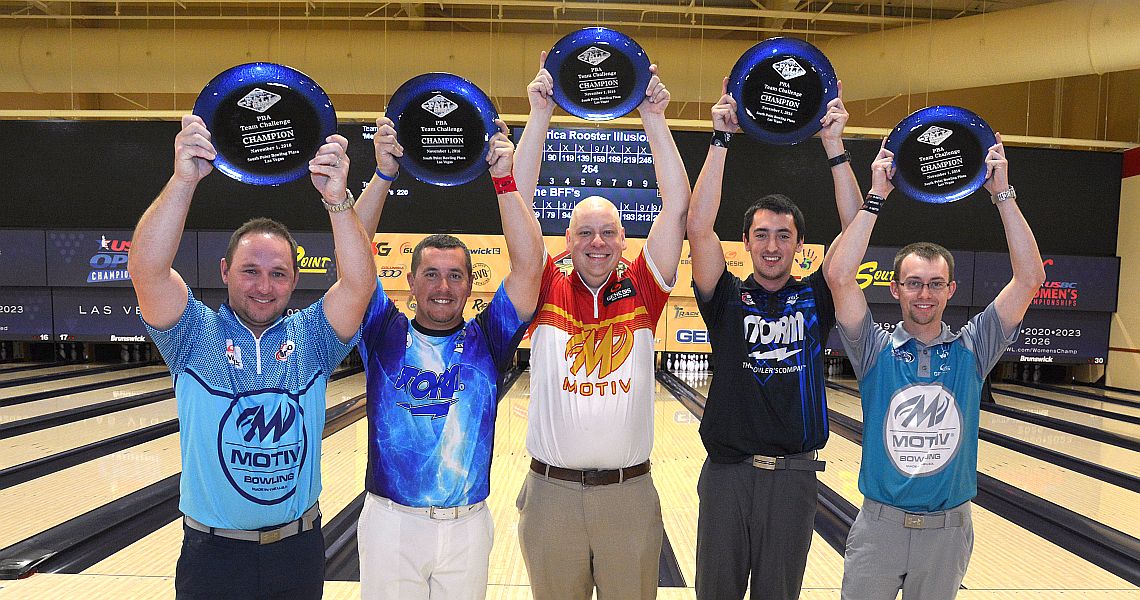 « Ryan Ciminelli gears up for title defense at 2016 U.S. Open