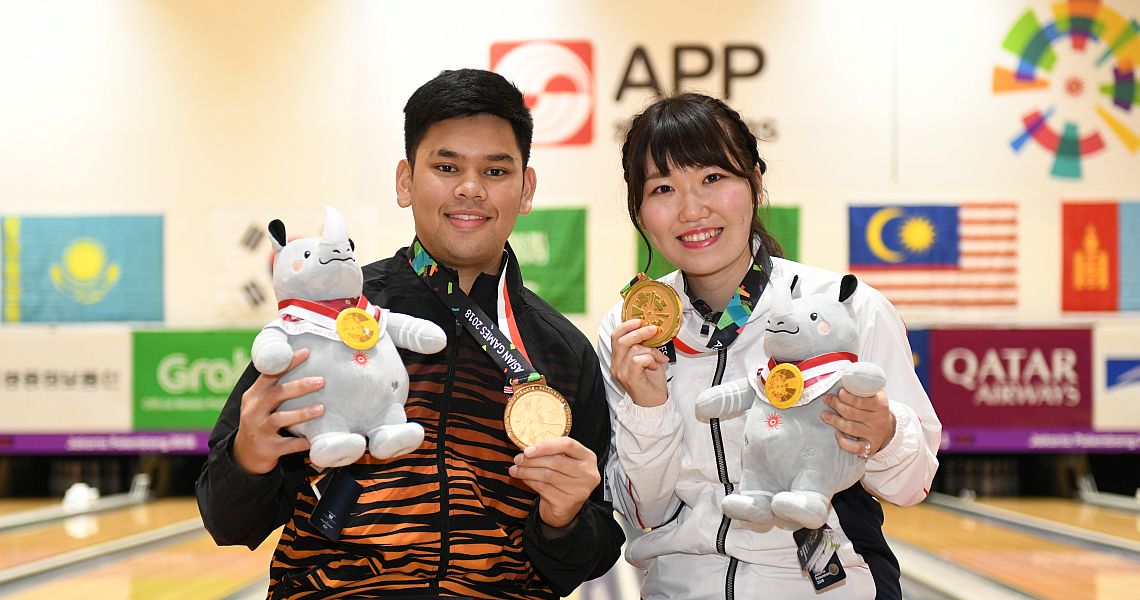 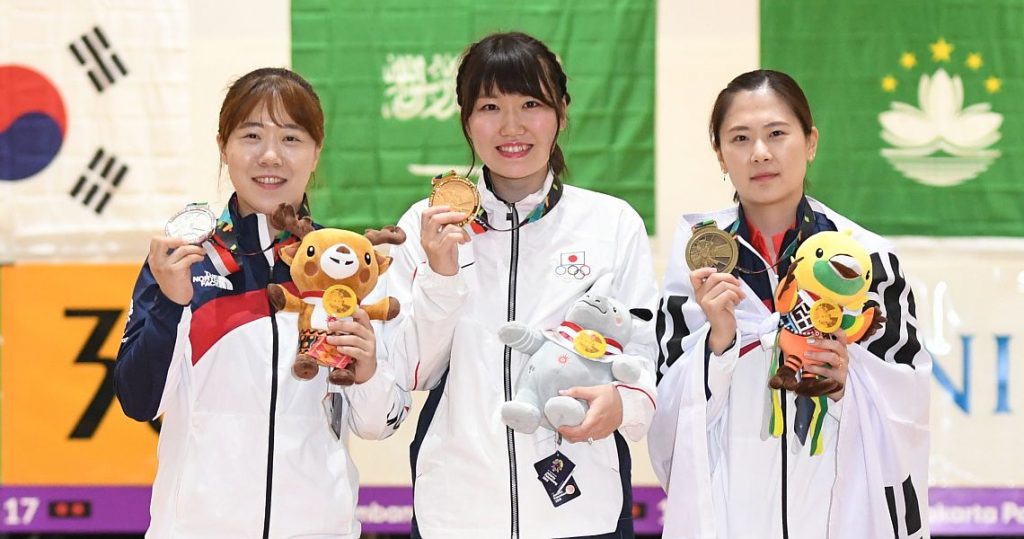 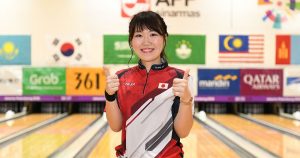 Overnight leader Ishimoto (right) added 1922 on medium oil to Sunday’s 1896 on long oil, an average of 238.63 over 16 games using the World Bowling Scoring System, and won 13 of her 16 matches to earn the no. 1 seed with 3948 total. Defending champion Lee Nayoung of Korea and her team mate Lee Yeonji took second and third place with 3854 and 3847, respectively, to meet in the opening match. 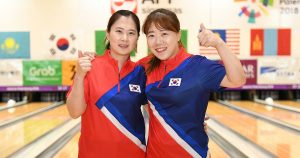 Yeonji ousted Naayoung (left, r-l), 230-211, for the right to bowl Ishimoto in the gold medal match in over two games total pins format.

Ishimoto won the first gold medal for Japanese women and the second for the team, while Yeonji and Nayoung added silver and bronze to the team gold medal for the Korean women. 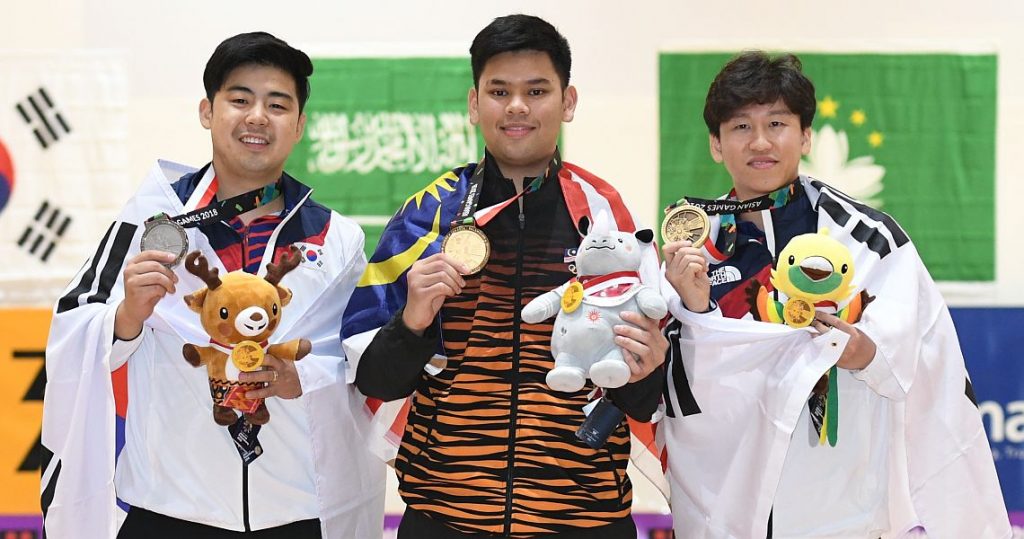 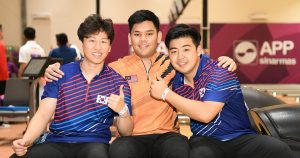 On the men’s side, Rafiq Ismail (right, in the middle) averaged 255.75 based on the World Bowling Scoring System and won all but one match to jump from sixth place after the first block on long oil to first place with 4005 total, including 130 bonus pins.

Ismail (left) overtook Korea’s Koo Seonghoi by 25 pins thanks to a 252-207 win in the position round. Koo took the no. 2 seed with 3980. Defending champion Park Jong Woo of Korea defeated Muhd Jaris Goh from Singapore in the position round, 267-256, to leap from fifth to third place with 3910, beating Lin Pai-Feng (3902) of Chinese Taipei and Takayu Miyazawa (3882) of Japan for the last spot to advance. 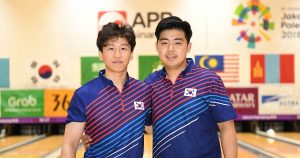 In the opening match of the stepladder finals, Park defeated his compatriot Koo (left, r-l) in a tight match, 254-245, to advance.

The multiple World Champion and Asian Games gold medalist carried the momentum into the gold medal match as he took a 21-pin lead with a 266-245 win in the first game. 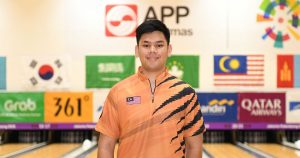 Ismail (right) started the second game with seven consecutive strikes to take a 12-pin lead overall as Park, who started with a turkey, converted four single-pin spares in the next five frames. Ismail converted a singles pin spare in his eighth frame and sealed the victory with a double in the 9th and 10 frame for 289-235 and 534-511.

The 18th Asian Games Jakarta Palembang 2018, an pan-Asian multi-sport event, will held from 18 August to 2 September 2018 in Indonesia.

For the first time, the quadrennial Asian Games are being co-hosted in two cities, the Indonesian capital of Jakarta and Palembang, the capital of the South Sumatra province. Approximately 17,000 athletes from 45 countries will participate in Asian biggest sports event and up to 13,000 volunteers are helping to make the Games happen.

For the first time in Asian Games history, only three disciplines were contested – Trios, Team of 6 and Masters. In the 2014 Asian Games in Incheon, South Korea, Bowling handed out six gold medals in each gender, including singles, doubles and all-events.

The 2018 Asian Games bowling competition kicked off with the women’s and men’s trios event on August 22 & 23.

The Team of 6 events was contested on August 24 & 25. In both events all players bowled two blocks of three games, one block on each pattern, with the six-game total determining the medalists.

The top 16 men and top 16 women based on the 12-game total pinfall in trios and team, but not more than two players from each NOC, qualified for the masters finals on August 26 and 27.

The top 3 men and top 3 women after 16 games of round robin match play, including bonus pins (10 per win, 5 for a tie) advanced to the stepladder finals.

Also for the first time in Asian Games history, the World Bowling Scoring System was used and Jakabaring Bowling Center has been modified to display and tabulate the new scoring system throughout the tenpin bowling competition.

The World Bowling Scoring System maintains the traditional 10-frame format but awards 30 pins for a strike, 10 pins for a spare plus the pinfall of the first shot in the frame, and actual pinfall after two shots in case of an open frame. The maximum score is still 300 and this figure is based on the player receiving 10 consecutive strikes with no bonus pins being awarded in the 10th frame.

Get the latest information about the 18th Asian Games Jakarta Palembang 2018 on the
official app.

Scores based on the World Bowling Scoring System. Top 3 with the highest 16-game total, including bonus pins (10 per win, 5 for each tie), advance to the stepladder finals.

Scores based on the World Bowling Scoring System. Top 3 with the highest 16-game total, including bonus pins (10 per win, 5 for each tie), advance to the stepladder finals.