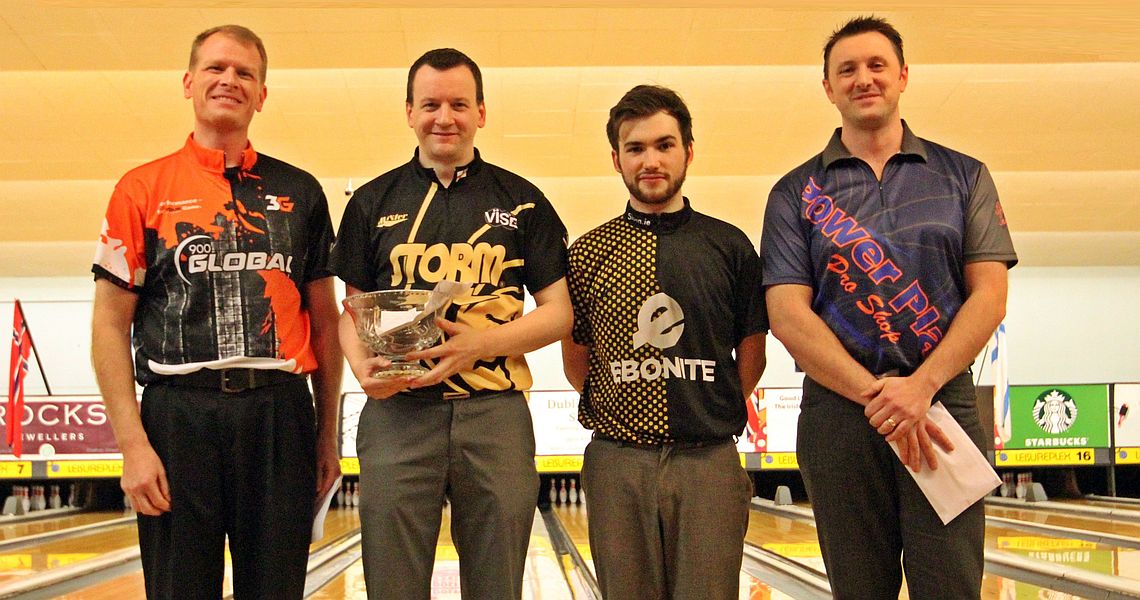 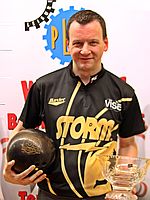 Moor, who also won the Irish Open in 2005 and 2009 and ties compatriot Dom Barrett (2008, ’10 and ’11) as the only three-time winners, received 5.000 Euro for the win. The lefthander extended his winning streak on the European Bowling Tour four years in which he won six of his 17 titles. His first win on the Tour came in The Malta Open Championships 2004.

Thurlby had one of two 300 games in qualifying (Jason Bezuidenhout of South Africa had the second), while Hurt posted the third 300 of the event in the third round of the finals. Sloan pocketed 2.500 Euro for second place, Thurlby received 1.500 Euro for third place and Hurt took home 1.250 Euro for fourth place.

After finishing fourth in 2015, Amanda Larkin, Ireland, was the best woman in the Irish Open for the second consecutive year, finishing in fifth place. She received a 750 Euro along with her 1.000 Euro prize money.

The top 4 senior bowlers (must be 50 years old on Jan. 1st) battled it out for the senior title. Tom Byrne, Ireland, edged Swede Bengt-Åke Bengtsson in the title match, 404-403, to earn 1.000 Euro. Bengtsson pocketed 500 Euro for second place, while 2015 Irish Open champion Brian Voss, United States, and Christer Petterson, Sweden, each got 250 Euro for third and fourth place.

The 28th Irish Open Championships in association with Storm is the second tournament of the 2016 European Bowling Tour and the first of six “EBT Satellite” events this season, the lowest of the four EBT tournament categories.

Low to cash is 32nd place, worth 100 Euro. The tournament awards extra prizes for the highest games (men and women), the top woman and the top 4 seniors (50+).

Women receive 8 pins handicap each game (up to 292 – maximum score is 300), an equality handicap provided to women in all EBT events.

Total 92 players – the top 80 from the overall qualifying standings, the top 4 each from a separate standing of squads 1-6 and squads 7-11 not among the top 12, plus the top 4 from the Desperado Squad – advanced to the finals.

The top six qualifiers received two byes while qualifiers 7-12 and the top four players each of squads 1-6 and squads 7-11 earned a first-round bye.

The remaining 72 players bowled four games scratch with the top 31 advancing to another four-game block from scratch after which the field will be cut to the top 26. Those 26 and the top six qualifiers bowl six games scratch. The top 16 advance to the single-elimination match play finals with the two-game total determining the winner.

The 2016 European Bowling Tour commences with the Hammer Bronzen Schietspoel Tournament 2016, a “silver” tournament, which will be held from Jan. 31 – Feb. 7 at Dolfijn Bowling Tilburg in Tilburg, Netherlands.

Top 32 with position, country and earnings

Top 26 advance to the third round

Top 31 advance to the second round