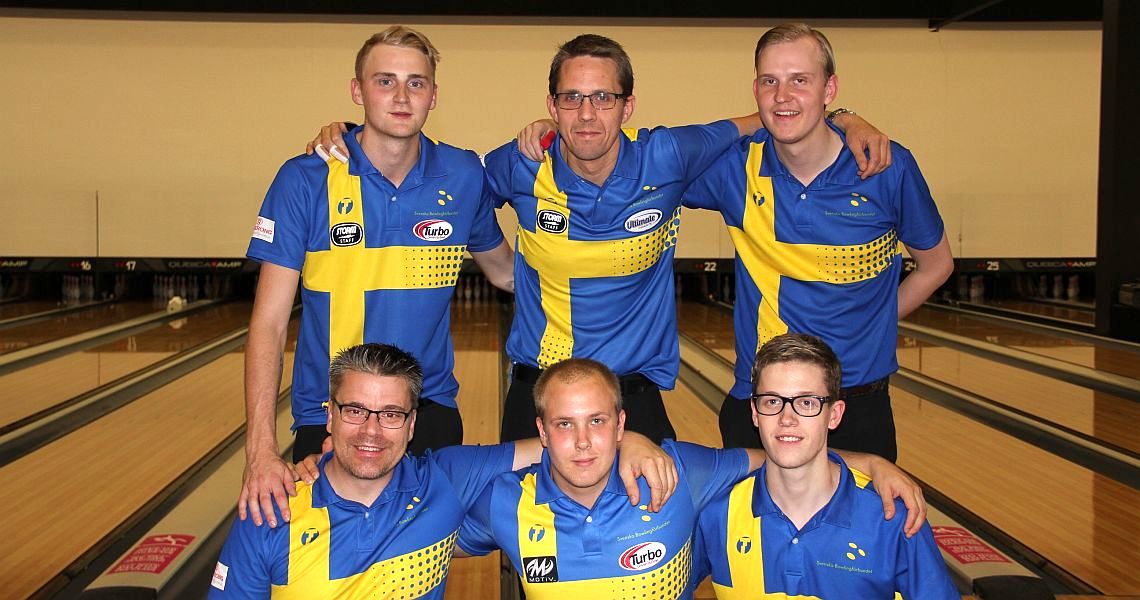 Sweden sets new record on the way to the top seed

27 August, 2016
Championships
2218
Ads
Sweden set a new Championship record on the way to the top seed for the medal round in the prestigious five-player team event at the Men’s European Championships in Brussel, Belgium.

Starting the day in the pole position with 3375, Peter Hellström, Martin Larsen, Jesper Svensson, Markus Jansson and Mattias Wetterberg, who replaced Pontus Andersson in the second block Saturday at bowling center Bowling Stones, added 3440, including games of 1101, 1210 and 1129 to lead the field of 36 countries with 6815 total and an average of 227.17. From top left, clockwise, Svensson, Larsen, Wetterberg, Andersson, Jansson and Hellström. 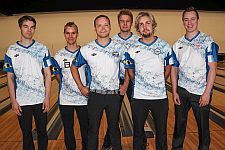 Finland previously held the record with 6782, set in 2005 in Moscow, Russia. Hellström led the team with 1403, Larsen was close behind with 1391 and was followed by Svensson with 1372 and Jansson with 1294, while Wetterberg and Andersson contributed 706 and 649, respectively.

Finland with Osku Palermaa, Juhani Tonteri, Jari Ratia, Joonas Jähi, Sami Lampo and Perttu Jussila (left) was second with 6588 (219.60), 227 pins behind Sweden, and has a chance to defend the title. Palermaa, Tonteri and Jähi were on the team that won the gold medal at the 2015 MEC in Aalborg, Denmark. 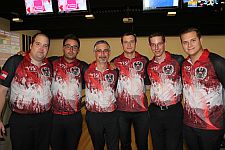 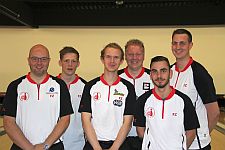 Denmark, which has won two gold and one silver medal in singles, doubles and trios will earn its fourth medal in as many events as Mik Stampe, Carsten Warming Hansen, Thomas Larsen, Markus Bergendorff, Jimmy Mortensen and Jesper Agerbo (left) beat out the Dutch team for fourth place by 16 pins, 6480 to 6464.

Czech Republic and Italy, who were in third and fourth place, respectively, after the first block on Friday, slipped all the way out of the medal round to 9th and 7th place.

The top 4 teams advanced to the medal round which got underway with the semi-finals at 7 p.m. CEST.

The team preliminaries also decided the medals in all-events and the top 24 players for the masters competition, which will conclude the Championships on Sunday. 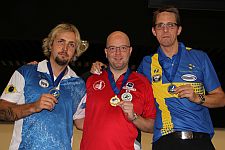 Singles and trios gold medalist Jesper Agerbo (center) never relinquished the lead in all-events to capture his third gold medal and the seventh in his career with 5604 and an average of 233.50 for 24-game total pinfall in singles, doubles, trios and team preliminaries.

With the victory Agerbo now has completed the “Grand Slam” on European level as he has won gold in each of World Bowling’s six disciplines, and a second in trios. The silver medal went to Joonas Jähi (left) who regained second place with 5536 and an average of 230.67.

The bronze medal was decided in the very last frame. Defending masters champion Martin Larsen (right) closed the team event with 257 and as Kert Truus of Estonia suffered a 172 low game, the Swede overtook Truus by just two pins to secure the bronze medal, 5500 to 5498.

The top eight players in all-events would miss the first round of masters match play. Sitting in eighth place was Jesper Svensson with 5402 total and an average of 225.08. Mik Stampe took the 24th and last spot to advance to the masters with 5293 (220.54). 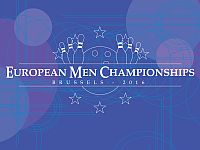 The 2016 Men’s European Championships will be held from August 17-28 at Bowling Stones, a 36-lane QubicaAMF-equipped bowling center in Brussels, Belgium. The nine-day competition started on Saturday, August 20, and culminates with the masters finals on Sunday, August 28.

Singles, doubles, trios and team events features six games preliminaries with the top 4 advancing to the playoffs in one-game format, seeded 1 to 4 according to their position in the prelims. No. 1 bowls No. 4 and No. 2 takes on No. 3. The winners bowl for gold and silver and the losers share the bronze medals.

The top three players with the highest 24-game total (combined scores in the singles, doubles and team preliminaries) receive the medals in all-events.

The top 24 in all-events advance to single-elimination masters match play in best-of-three games format. The top 8 receive one bye.

The 2016 Men’s European Championships serve as the qualifying event for male bowlers competing in the X World Games 2017 in Wroclaw, Poland. The top 5 countries with the two highest positioned players in All-Events qualify for the World Games. The bowling competition will be held July 20-24 at Sky Bowling.

Top 4 advance to the medal round

« Israel leads as A squad has completed Team preliminaries