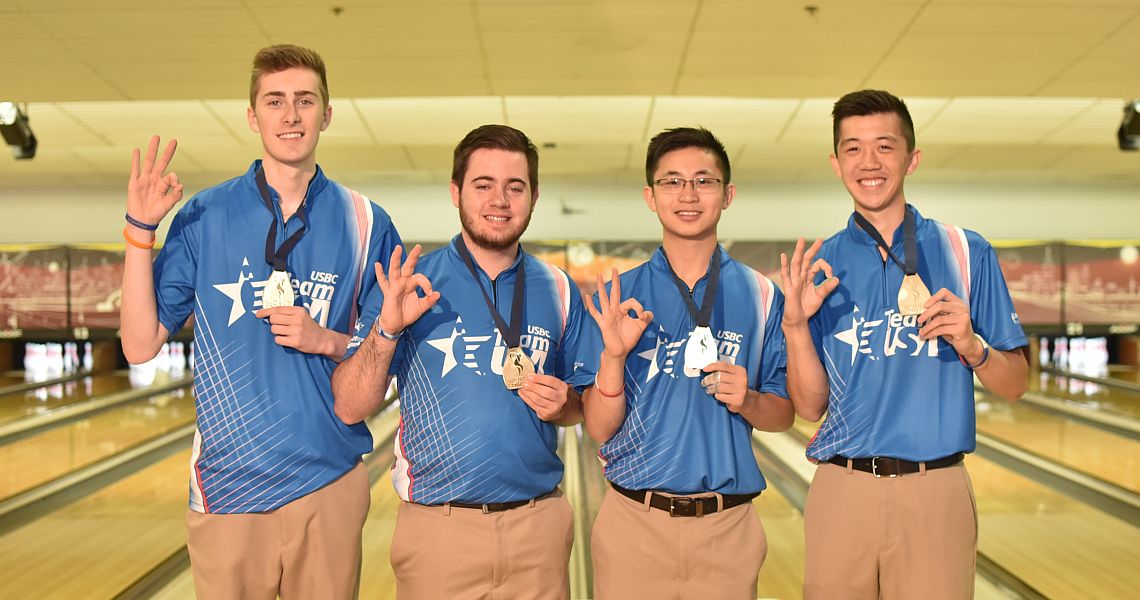 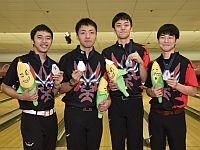 The Junior Team USA boys used a near-perfect deciding-game effort to claim their third consecutive team gold medal at the World Bowling Youth Championships, and Korea was dominant on the girls’ side to return to the winner’s circle for the first time since 2010.

The United States (pictured above) opened its final game against Japan (right) with seven consecutive strikes and cruised to a 279-188 win, claiming the gold medal by a 2-1 margin. Junior Team USA won the opening game 218-197, and Japan used a clutch finish to take the second game, 223-217.

Doyle and Low were part of the winning team at the 2014 World Youth Championships in Hong Kong.

“Early on today, we didn’t know what to expect with the new format, but (Team USA head coach) Rod (Ross) told us to just do what we did all week and show everyone why we were the top qualifiers,” said Low, who also won gold in singles and doubles (with Simonsen) and the silver medal in all-events.

“We used that advice to help turn the momentum, and to go on to complete the three-peat feels amazing. It has been really special to be a part of these last two wins.” 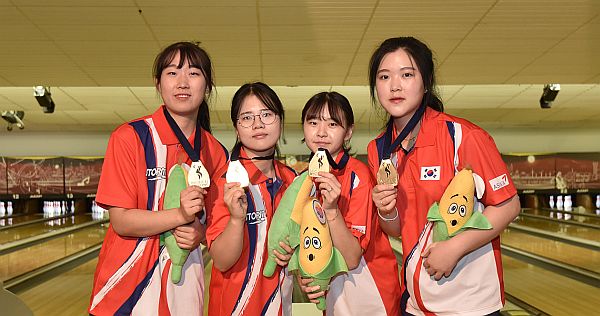 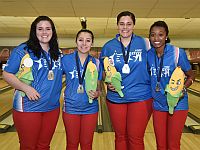 Anchor Park Yu Na delivered a double in the final frame of Korea’s opening game against the United States in the girls’ final, including a Brooklyn strike on her first offering, to escape with a 204-193 win, and that momentum carried over into the second game for a 246-179 win and 2-0 sweep.

Korea (pictured above) rallied for six consecutive strikes in the middle of the deciding game, while the United States girls (left) suffered three open frames in the loss.

Park and Lee also were the doubles winners this week, topping Mason and Bond in the final, and Mason added gold medals in singles and all-events.

“Taking the two gold medals individually was nice, but winning gold in team would’ve been amazing,” said Mason, a standout and national champion at the nearby University of Nebraska.

“I always say that what happens was supposed to happen that way, and Korea bowled very well today to earn the gold medal. We are grateful to have had the opportunity, and we are still very proud to have gotten the silver.”

The United States and Korea were the first teams to navigate through the new best-of-three Baker format used for the team medal round at the World Youth Championships. In the recent past, traditional team games were bowled, with total pinfall determining who would advance or win. 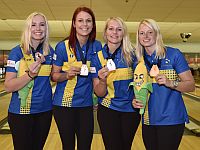 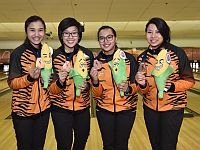 The history of the World Youth Championships dates back to 1988, when it debuted in the Philippines as the International Youth Championships. Not counting two years early on when team competition was mixed, the United States is the only country on the boys’ side to win team gold more than twice, claiming four overall. In girls’ competition, Korea now has won the team gold medal a record five times.

“We are very proud of the win today, and I think this speaks volumes about the programs and events we have in place in the U.S. to help develop such quality players, many of whom have been with us for multiple years,” Ross said.

“We trained for the new format, but you can’t really train for those types of pressure situations. We got pushed to three games twice and struck when we needed to, and I’m extremely proud of our team today.”

On the way to the gold-medal match, the Junior Team USA boys found themselves on the verge of defeat heading into the final frame of their third game against Canada, when Canadian anchor Mitch Hupe rolled a four-count to open the door. 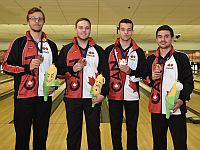 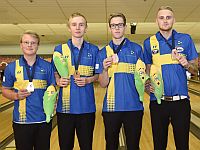 The top 24 in each set of all-events standings still have some bowling to do as Masters match play got underway after the team and all-events medal presentations Monday.

The Masters portion of the event this year features best-of-three single-elimination matches on the event’s 45-foot Rome oil pattern. The top eight qualifiers in each division earned first-round byes.

The first two steps of Masters competition took place Monday, and eight remaining bowlers on each side will return to the lanes Tuesday at 10 a.m. Eastern. The Masters semifinals will begin Tuesday at 11:15 a.m. EDT, with the finals taking place immediately after, all live on BowlTV.

The defending Masters champions, Jesper Svensson and Mirai Ishimoto of Japan, both finished among the top 24 and will have a chance to repeat in 2016. 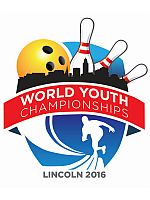 Bowling fans from around the globe can watch the competition live on BOWL.com’s BowlTV with continued coverage of all qualifying, semifinal and final rounds. The complete live-streaming schedule (all times Eastern) can be found here. 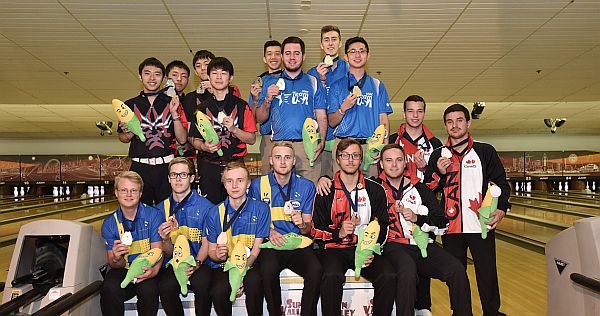 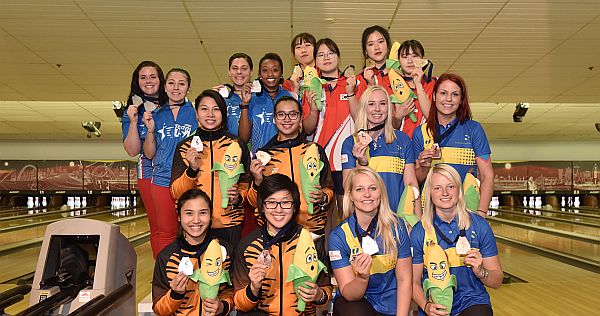 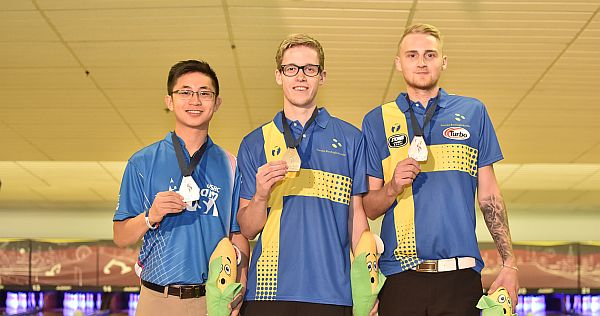 In roll-off to determine the seeding for the Masters, Cheah Ray Han of Singapore defeated Santtu Tahvanainen of Finland, 10-7. 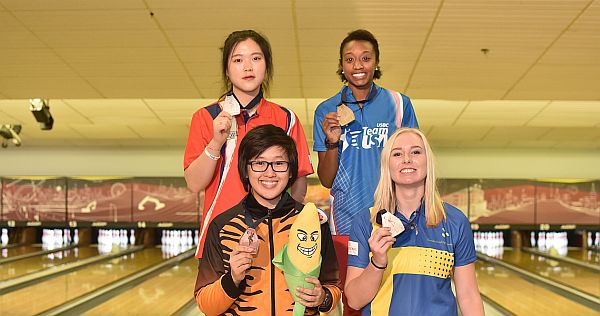 In roll-offs to determine the seeding for the Masters, Victoria Chin of Malaysia def. Filippa Persson of Sweden, 10-7, and Amabel Chua defeated Tracy See, both Singapore, 10-8.