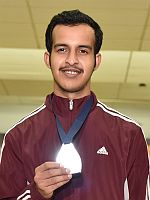 The United States swept the gold medals Wednesday at the 2016 World Bowling Youth Championships as Wesley Low of Palmdale, California, earned the redemption he waited two years for, and local collegiate standout Gazmine Mason of Cranston, Rhode Island, triumphed in her adopted hometown.

Low (pictured left), who claimed the silver medal in singles at the 2014 event in Hong Kong, was dominant in this year’s final, cruising to a 224-134 win against Mohammed Al Merekhi (right) of Qatar at Sun Valley Lanes in Lincoln, Nebraska.

As the all-events record holder at the World Youth Championships, also achieved in 2014, Low knows this week’s event is a marathon, with the ultimate prize being a third consecutive team title for the Junior Team USA boys. He sees Wednesday’s win as a confidence-building steppingstone.

“I think it was amazing to have the chance to bowl for the title again and just an honor to even make the top four with all of the incredible bowlers here,” Low said.

“The real focus is on the team event at the end of the week, but this is a great start. Each time we bowl is an opportunity to learn more about the lanes and oil pattern, and I’m going to approach each day with an open mind.” Having already helped bring a National Collegiate Athletic Association bowling national championship to the nearby University of Nebraska (2015), Mason (pictured left) was ecstatic to claim a world championship at home in the United States and in the city and bowling community that have been so welcoming.

She took the lead for the first time in the final match with a Brooklyn strike in the sixth frame and turned that fortune into four consecutive strikes. Victoria Chin (right) of Malaysia kept the pressure on with a strike in the ninth frame and a double in the 10th, leaving Mason needing eight pins in her final frame for the win.

Mason left the 2-4-10 split on her first offering and toppled two of them on the spare attempt to escape with a 211-207 victory.

The win marked the first girls’ singles title for the United States at the World Youth Championships since Kelly Kulick of Union, New Jersey, captured the gold medal at the 2000 event in the Dominican Republic.

“This win means everything to me,” said Mason, a 20-year-old right-hander and two-time member of Junior Team USA. “I’ve worked so hard for this, and getting the gold feels amazing. I’m thankful for all of the support from my teammates and coaches.” 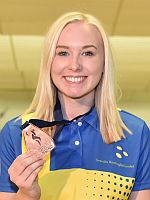 In a bittersweet semifinal win, Mason defeated her Junior Team USA and Nebraska teammate, Julia Bond (left) of Aurora, Illinois, 234-169. Mason struck seven times in the first nine frames, while Bond was undone by a trio of open frames.

“We’re always competing during practice and at tournaments, so this is something we’ve been through before,” Mason said. “We both wanted to win and both did the best we could.”

Chin earned her spot in the final with a 219-201 win against Sweden’s Filippa Persson (right), who used a perfect game in qualifying to lead the 79-player field from 24 countries. Persson and Bond each earned bronze medals for their efforts.

Low, a 19-year-old two-hander who attacks the lanes from the left side, averaged more than 230 in qualifying and claimed the No. 3 seed for the semifinals.

On the way to his second consecutive championship match in singles at the World Youth Championships, Low outlasted the Dominican Republic’s Hector Simo, 259-242. 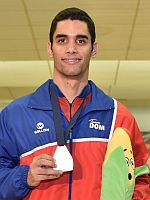 Simo (left) had a chance to lock up the win with a double in his final frame, but a 10 pin on his first shot gave Low the chance to advance, which he did with three 10th-frame strikes.

Simo earned a bronze medal for his performance, the first medal of any kind for the Dominican Republic at the World Youth Championships. The event’s history dates back to 1988.

In the other semifinal, neither Al Merekhi, nor top seed Aseel Alroomi of Kuwait (right), could gain any traction, and Al Merekhi was able to mark in the 10th frame for a 185-178 win, setting up his meeting with Low.

“The hardest part about this is just getting to the top four, and we were fortunate to get some breaks along the way to get there in singles,” Ross said. “Things went our way in the semifinals and finals, and I hope this is just the start of a great week. There’s a lot of talented bowlers and teams here, so we definitely have a lot more hard work ahead of us.” Competition at the 2016 World Youth Championships continues with the first squad of boys doubles live on BowlTV on Thursday at 10 a.m. Eastern.

The week’s event includes more than 200 competitors from 37 countries, and bowlers will compete for medals in five events – singles, doubles, team, all-events and Masters.

Bowling fans from around the globe will be able to watch the competition live on BOWL.com’s BowlTV with continued coverage of all qualifying, semifinal and final rounds. The complete live-streaming schedule (all times Eastern) can be found here.