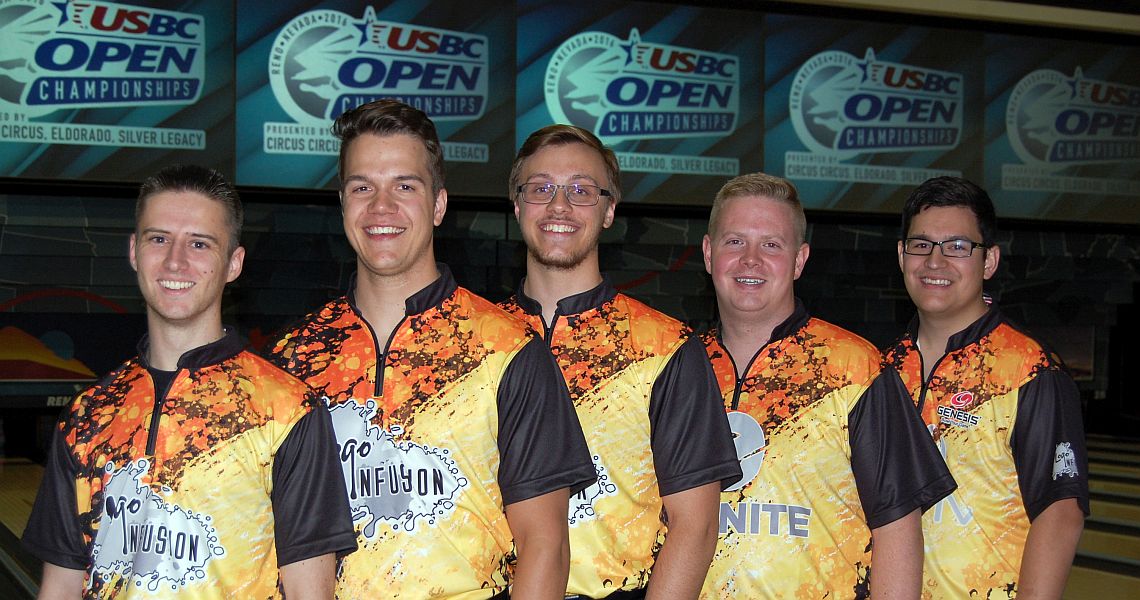 15 June, 2016
ChampionshipsOpen Championships
1832
Ads
The members of BowersBowlingTour.com of Bel Aire, Kansas, had a memorable trip to the 2016 United States Bowling Congress Open Championships, which included taking the lead in Regular Team and Team All-Events.

The group started its team event June 10 with a 1,004 game and rallied with two of the four highest team games of the year at the National Bowling Stadium in Reno, Nevada (1,178 and 1,195), to land at the top of the team standings with a 3,377 total, 77 pins better than previous leader, Bowling Dynamics.com of Phoenix.

Kristopher Prather, the Regular Singles runner-up in his NBS debut in 2011, led the way for BowersBowlingTour.com this year with a 732 series and was followed by Zach Rhoades (725), Mitch Hupe (674), Brent Bowers (630) and Justin Zwaschka (616).

The quintet carried that momentum back onto the lanes June 11 and used a dramatic finish to sneak into the lead in Team All-Events with a 9,730 total, surpassing HornswogglerS of Staten Island, New York, which previously held the lead with 9,719.

Prather and Bowers, needed to combine for a 480 total in their last game of singles to match HornswogglerS.

After Prather left a stone 8 pin on his first offering in the 10th frame, anything short of a double from Bowers meant a tie at best. Bowers struck on his first shot, rolled a 2 pin for a strike on his second and tossed one more strike on the fill ball to cap the 491 final effort.

The group follows in a long line of success of bowlers from the Wichita, Kansas, area, which Bowers, who at age 28 and making his seventh Open Championships appearance is the veteran of the team, has used as a lifetime of motivation.

“Looking up to those guys in Wichita is kind of what planted the dream in my head about winning an eagle at this tournament someday,” Bowers said. “This is surreal. Last year, we were just incredibly happy to make the leaderboard, and now to be leaving Reno with our names at the top of two events is incredible.” 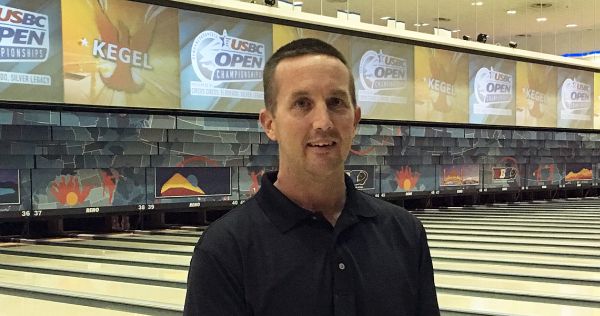 Matt Gilman of Pembroke Pines, Florida, rolled the second 800 series of the 2016 USBC Open Championships and made a run at the lead in Regular Singles on June 8.

The 34-year-old right-hander turned in a 31-strike performance that included 18 consecutive strikes on the way to opening games of 290 and 279, which left him needing a 246 finish to match Robert J. Bures of Painesville, Ohio, who leads Regular Singles with 815.

After an open frame early in the singles finale, Gilman found himself needing three strikes in the 10th frame to tie for the lead. He delivered two strikes but left a 10 pin on his final offering to finish with 814.

The former Junior Team USA member’s overall performance at the National Bowling Stadium this year was a roller coaster of emotions.

Gilman started the trip with the second 300 game of the year at the on-site Bowlers Journal Championships presented by USBC, before shifting gears for his 10th Open Championships appearance, which included scores of 575 in team and 517 in doubles for a 1,906 all-events total. 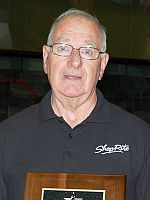 Howard Beekman of Gillette, New Jersey, and Joseph Leiser of Gainesville, Georgia, found themselves in the spotlight at Center Aisle this week as the final two bowlers to enter the 50-Year Club at the 2016 USBC Open Championships.

Beekman (left), 72, and Leiser (right), 69, became the 18th and 19th bowlers to reach the milestone at this year’s tournament at the National Bowling Stadium, bringing the club’s total membership to 205 bowlers as the Open Championships prepares for its 114th year in 2017. 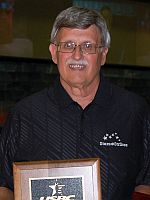 The two started their tournament journeys at the 1966 event in Rochester, New York, independently, with each missing one tournament along the way.

This year on the championship lanes, Beekman shot 422 in doubles and 341 in team, but did not compete in singles. In 50 Open Championships appearances, he has knocked down 79,603 pins for a career average of 178.1.

The 2016 USBC Open Championships, which kicked off its 129-day run March 5, enters its final month. The last team squad of this year’s event at the National Bowling Stadium is scheduled for July 10 at 8 p.m. Eastern, while the last doubles and singles squad is set to hit the lanes July 11 at 4 p.m. EDT.

Sweden takes lead in Trios as Squad 2 has completed preliminaries »