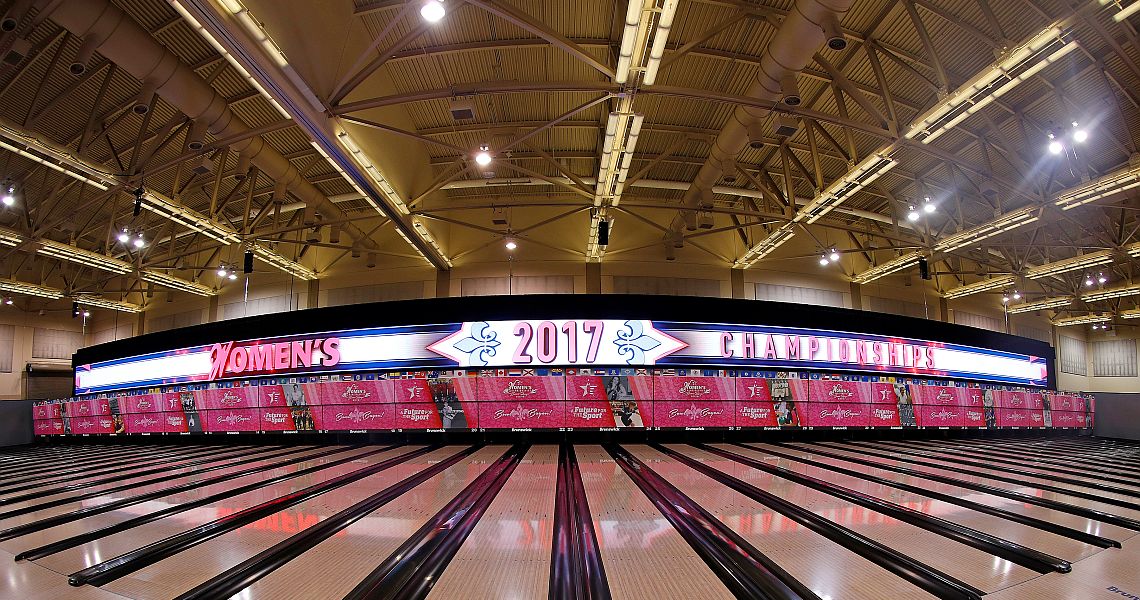 11 July, 2017
Women's Championships
3242
Ads
The 2017 United States Bowling Congress Women’s Championships had its 79-day run at the Raising Cane’s River Center come to a close Monday as the final competitors hit the lanes at the 98th edition of the event.

The 2017 USBC Women’s Championships, which kicked off April 23, marked the tournament’s second visit to Red Stick and third trip to the Pelican State.

This year, the River Center was transformed into a custom-built 44-lane venue (pictured above) in approximately eight weeks, including vendor and office space, a concessions area, locker room and squad room. The facility also was converted into a championship bowling facility in 2005 and 2012 for the USBC Open Championships.

The 1993 Women’s Championships was held at Baton Rouge’s Metro Bowl and Don Carter’s All-Star Lanes, and the 1966 tournament was contested in New Orleans.

In all, a total of 4,434 four-player teams competed in the 2017 event with hopes of bringing home a national title. The Women’s Championships features four average-based divisions for team competition and six divisions for doubles, singles and all-events. 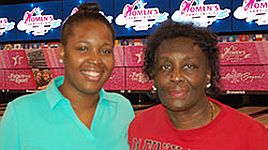 The top spot in Ruby Doubles came down to the final day of competition, as the mother-and-daughter tandem of Mary and Claudia Meeks of Shreveport, Louisiana, made their way to the top of the standings with a 1,201 total.

The Meeks made the 250-mile journey from Shreveport to make their tournament debuts, taking advantage of the event being held in their home state. Claudia, a 27-year-old right-hander, admitted that waiting until the end was part of the plan.

“There was a little strategic planning on my end,” said Claudia Meeks, who bowled collegiately at the University of Louisiana-Lafayette. “I’m a numbers girl and like to survey the other scores and everything, so I knew what we needed to get to. I told my mom to go out and do her best. I said I’d do my best to hold up my end, if she held me up when I was slacking.”

The trip also served as a return visit to the 44-lane venue for Claudia Meeks, who competed at the USBC Queens in May. That experience helped to bolster her confidence Monday.

Mary Meeks, a 64-year-old right-hander, was excited to share the moment with her daughter.

“This is an accomplishment for both us,” Mary Meeks said. “She’s been bowling since she was 2 years old, and it’s been fun to watch her progress from bowling juniors to college, and now with me.” 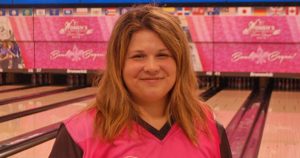 In the Diamond Division, featuring the tournament’s highest-average competitors, former Team USA and Junior Team USA member Jennifer King (right) of Irmo, South Carolina, made her Women’s Championships debut one to remember by helping The Big Ticket 1 of Columbia, South Carolina, to the top of the Diamond Team standings May 15.

King’s momentum continued the next day during doubles and singles, and she set the bar in Diamond All-Events with a 2,046 total for her nine games in Baton Rouge. 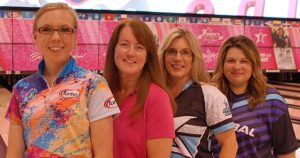 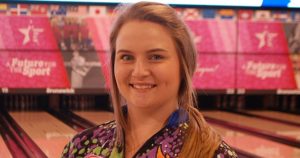 Collegiate standout Taylor Bulthuis (right) of Coral Springs, Florida, found some redemption at the River Center on May 17 as she posted games of 278, 226 and 242 to lead the way in Diamond Singles with a 746 series.

The 23-year-old right-hander made a trip to the venue in April for the Intercollegiate Team and Intercollegiate Singles Championships as a senior at Webber International. She helped the Warriors to the finals of the ITC and advanced to the title match of the ISC, leaving Baton Rouge with a pair of runner-up finishes. 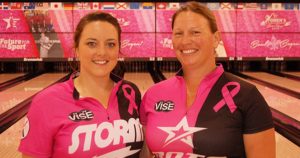 After finishing in fourth place in Diamond Doubles at the 2016 Women’s Championships in Las Vegas, Boelter and Kelly were able to recall on that experience on their way to the top spot.

A total of nine bowlers celebrated their 50th Women’s Championships appearances in 2017.

There also were nine TV finals taped at the River Center since April, including eight on CBS Sports Network and one on ESPNU (NCAA Women’s Bowling Championship).

The championship facility inside of the River Center now will be deconstructed in approximately 10 days. Construction crews will work alongside Habitat for Humanity of Greater Baton Rouge, and all salvageable materials will be donated to Habitat for Humanity, with plans to use them locally.

The Women’s Championships will head to Reno, Nevada, and the National Bowling Stadium in 2018 for the tournament’s 99th edition.

Baton Rouge, which has hosted three USBC championship events since 2005, is scheduled to host the 2025 Open Championships.

« Ida Andersson adds her name to the leaderboard in San Marino