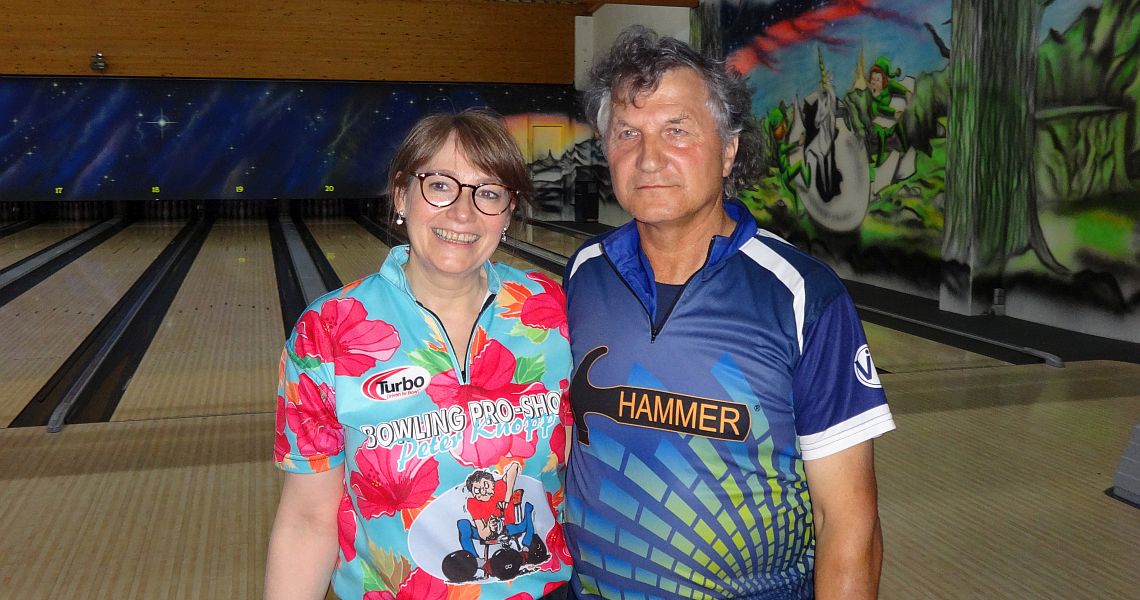 The fifth stop on the 2017 International Seniors Bowling Tour was the second visit of the year to Germany and attracted an entry list of 79 men and 19 women.

The format for the tournament was a single six-game qualifying block, with unlimited re-entries. For those not able to qualify through the main leaderboard, there were additional opportunities through Turbo games, Early Bird qualification, Scratch scores and a Desperado squad.

Bowling started the weekend before the finals day, with four squads being held. German bowlers took all the top spots. Berny Stöckl with 1517 and Harry Laub with 1436 led in the men’s section. In the women’s section, Petra Börding‘s 1213 and Karin Lischka‘s 1213 ensured they would make the finals through the Early Bird qualification, if not through the overall ranking.

Thursday saw more German success, with Dieter Rau posting the highest score of the day with 1358 in the men’s division, and defending women’s champion Martina Beckel establishing a clear lead over the rest of the ladies with 1379.

Friday saw the first successes for overseas bowlers, with English bowlers taking the top spots. Steven Jeeves posted a huge block of 1564, a 256 scratch average, while in the ladies section Kimberly Oakley had an equally impressive 228 average to post a new top score of 1396.

There were three squads on Saturday. After the first two, Steve Carnell of England had done best with 1475, just ahead of Carlo Greulich of Germany with 1455. Bianca Völkl-Brandt of Germany was highest lady with 1304.

The final squad of the day saw a number of bowlers trying to make the final cuts. Harald Punessen of Germany secured his place with 1469, while in the ladies section Marianne Pelz of Germany snatched a finals place with her 1262 block.

The final qualification standings showed Steve Jeeves was top with 1564, ahead of Berny Stöckl 1517, and Frank Börner 1490.

The cut for the top 24 who would continue to the finals was Klaus Reitze of Germany with 1395. To these 24 were added 5 Early Bird qualifiers, 7 scratch qualifiers, and two Turbo qualifiers. This left two places to fill from the Desperado squad.

The top 10 women would automatically progress to the finals, led by Kimberly Oakley 1396, Martina Beckel 1379, and Bianca Völkl-Brandt 1304. In tenth place was Liliane Vintens of Belgium with 1215. Two Early Bird, two Scratch, and one Turbo qualifier would also make the finals, to be joined by a single Desperado qualifier.

Only 11 men and 1 women took part in the Desperado. Robert Vallons of Belgium won it comfortably with 287, ahead of Pierre Prou of France with 233. As only 1 women took part, Martina Jakobi of Germany automatically qualified.

Overall qualifiers 19 to 24, plus all the other qualifiers from the other sections had an early start on Sunday, bowling a 4 game block, with only 10 progressing to the next round. Hermann Wimmer of Germany was top with 1030, well clear of the rest of the field. Last person to make the second final round was Alan Keddie of Scotland with 881. 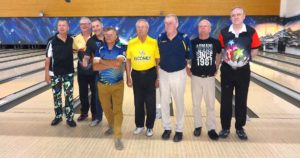 In the second final round over 6 games, Carlo Greulich narrowly took the top place with 1552, ahead of Klaus-Uwe Lischka of Germany. Only eight players (pictured left) would make the next round, last bowler to make the cut was Ingar Gabrielsen of Norway with 1376. 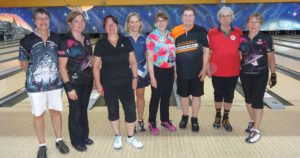 Last woman to make the next round (pictured right) was Gisela Insinger of Germany with 1193, just one pin ahead of qualifying leader Kimberly Oakley, who hadn’t managed to repeat her qualifying form and so just missed out on a place in the next round. 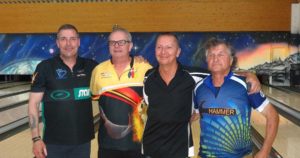 After a further three games with pinfall carried forward, just the top four (left) would make the final round. Carlo Greulich retained his lead in the men’s section, ahead of Klaus-Uwe Lischka, Steven Jeeves, and Robert Vallons. 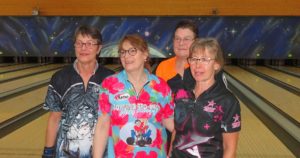 The final rounds were single game elimination, all the remaining players played one game, and the lowest was eliminated. First to fall in the men’s section was previous leader Carlo Greulich.

In the second game, Klaus-Uwe Lischka was unable to keep up with the others, and was eliminated.

In the first game of the ladies section, it looked like the previous leader was also in trouble, with Bianca Völkl-Brandt struggling to score. However, a good finish to the game saw Marianne Pelz eliminated.

In the second game, both Martina Beckel and Völkl-Brandt had good games to see last year’s runner-up Karin Lischka eliminated.

In the final deciding game, Völkl-Brandt got off to a blistering start with a run of strikes, and the game was decided soon after the half-way mark, the final score being 270 to 186, awarding Völkl-Brandt her second ISBT title.

The next stop on the 2017 International Seniors Bowling Tour is the Dutch Senior Open, which will be held August 2-6 at Sportcity Bowling in Nieuwegein, Netherlands. Full details are available at the ISBT website. 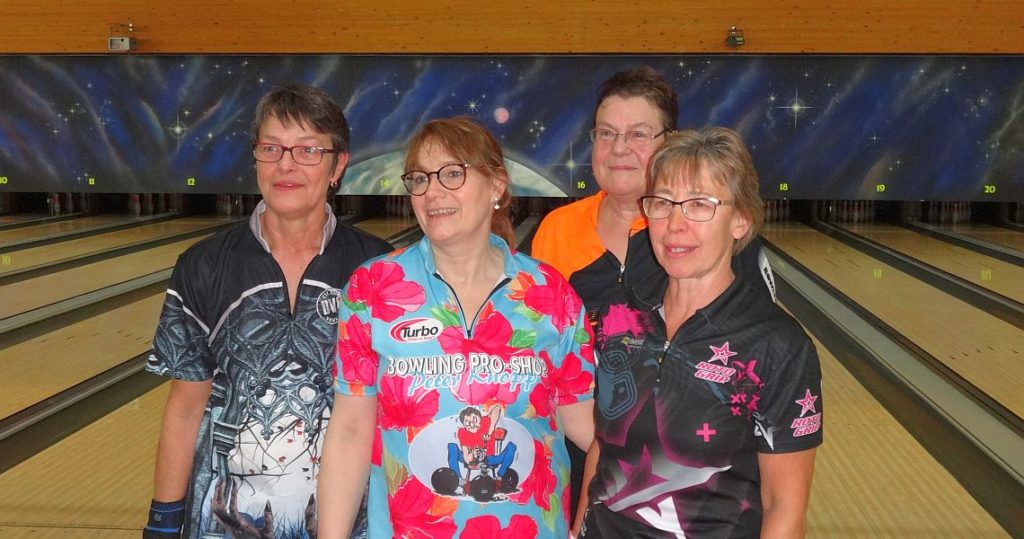 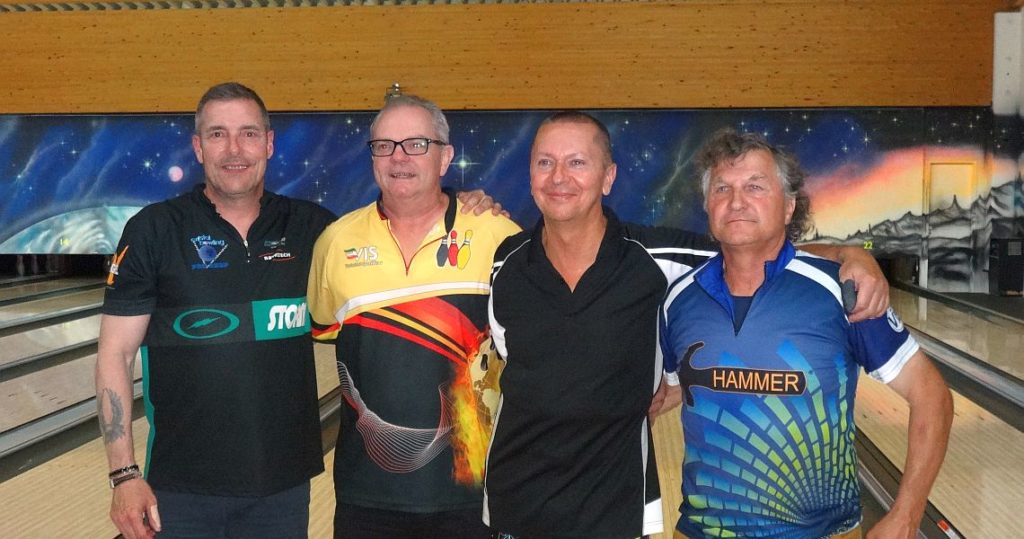 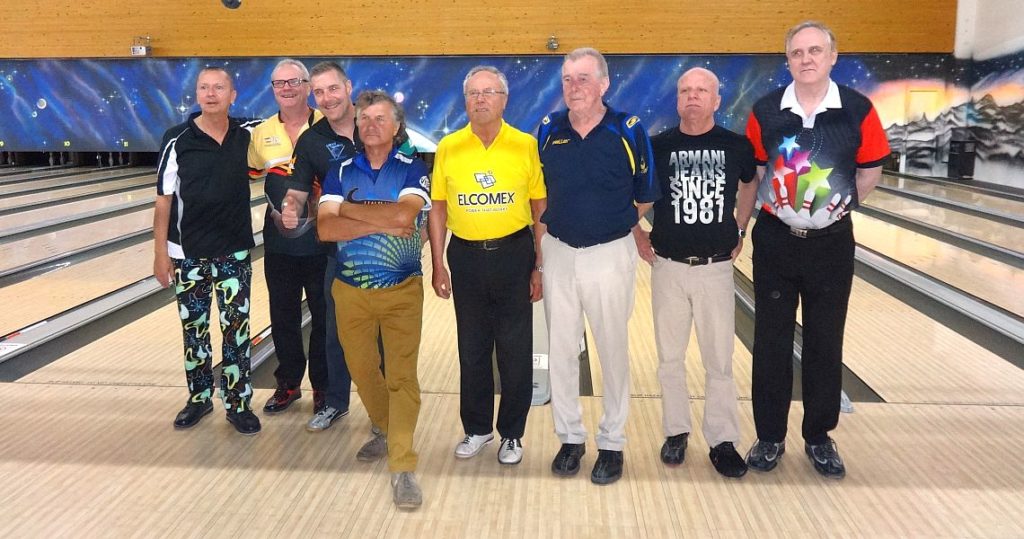 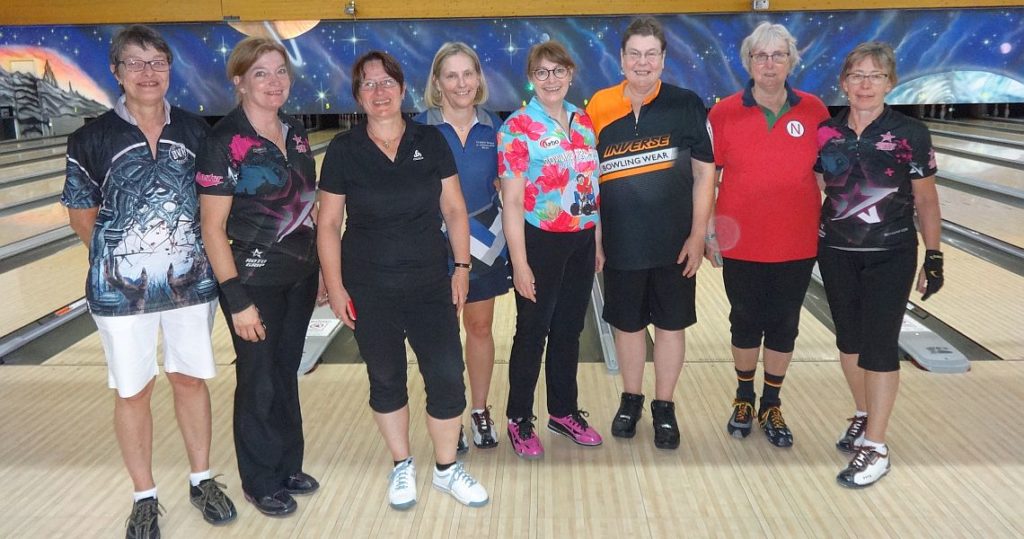