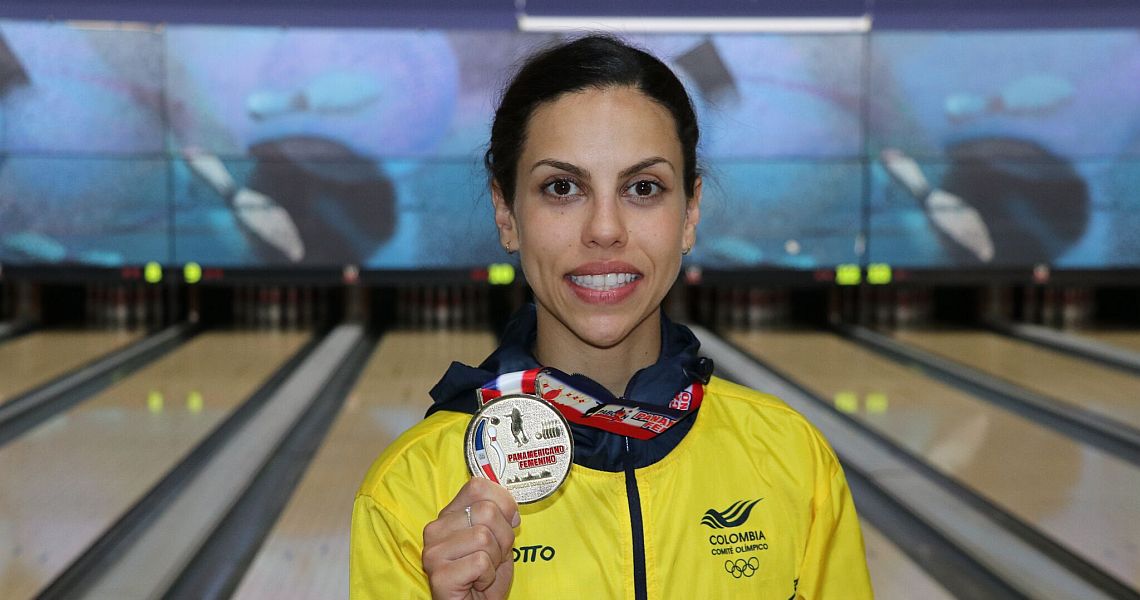 30 September, 2018
Championships
3073
Ads
Less than 24 hours after throwing the strike that sealed the team gold medal for her country at the 2018 Pan American Bowling Confederation Women’s Championships, Colombia’s Rocio Restrepo again delivered under pressure to claim the gold medal in the tournament-ending Masters event.

The individual win Saturday at Sebelen Bowling Center in Santo Domingo, Dominican Republic, her first PABCON Masters title, despite being on the Colombian national team more than half her life, came at the expense of her teammate, Maria Jose Rodriguez. And, along with the hardware, the meeting also offered Restrepo a chance at some friendly redemption.

Earlier in September, the two met in the opening round of the Professional Women’s Bowling Association Tour Championship, where Rodriguez was the victor and went on to win the tournament for the second major title of her career.

Both victories this week helped show Restrepo that her constant hard work, training and a new mental outlook are paying off.

“I struggled in those situations in the past, and I lost a lot,” Restrepo said. “I didn’t know why I put so much pressure on myself or why I treated that shot any different than the ones that got me to that point. I would think of something physical or let my mind go somewhere else. Now, I take it with a smile and throw the shots I know I can. I’m not afraid of losing, and I have nothing to prove. I just want to go out there and have fun.” 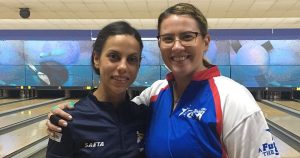 On the way to the meeting with Rodriguez, Restrepo dispatched of a trio of Team USA members – Sydney Brummett of Fort Wayne, Indiana (2-1), left-hander Shannon Pluhowsky of Dayton, Ohio (2-0), and Liz Kuhlkin (pictured right) of Schenectady, New York (2-1).

Restrepo started the day slowly, shooting 201 and 194 to begin her match with Brummett, but the 30-year-old Colombian then averaged more than 249 over her final eight games to find her way back to the top of the medal stand.

Rodriguez started the single-elimination match-play portion of the tournament with a 2-1 win against another one of her teammates, Clara Guerrero. She then topped Canada’s Isabelle Rioux (2-1) and Team USA’s Jordan Richard (2-0) to reach the gold-medal match. 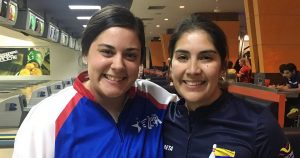 Kuhlkin and Richard both earned bronze medals for reaching the Masters semifinals.

Richard (pictured left with Maria Jose Rodriguez, right) also had a perfect game during the Masters event, while Puerto Rico’s Paulina Torres rolled the first one of the week Wednesday during doubles.

Now that the PWBA Tour season has concluded and there’s limited international competition on the horizon for the ladies, there will be some time to reflect and recover. And, Restrepo can smile when she looks back on a year that included injury and illness but also her fourth career PWBA Tour title and a successful week at the PABCON Women’s Championships.

Restrepo said she doesn’t talk about it too much, but many of the things she endured this year, both on and off the lanes, made her ask a lot of questions. However, the answers were simple.

“I do this because I love this sport so much,” Restrepo said. “I just love being in those moments and pressure situations now. Before, I would shy away and not want to be in those situations, but I had to step back and ask myself why. It’s what I prepare for, so I kind of changed my attitude. I now feel better mentally, and I think my physical game has gotten better, too.”

Despite the early departure from the match-play bracket Saturday, Team USA’s Richard also will leave the Dominican Republic with some fond memories of her debut with the adult version of Team USA.

Her run at the PABCON Women’s Championships included a gold medal in doubles with Shannon O’Keefe of Shiloh, Illinois, a trios gold medal with O’Keefe and Pluhowsky and a silver medal in team. Missy Parkin of Laguna Hills, California, was the final member of the six-player Team USA contingent.

All six bowlers from the United States, and all 14 PWBA members in the field, were among the 16 bowlers who advanced to the Masters event based on their 24-game all-events totals this week.

Overall, the United States earned the most medals with 10, followed by Colombia (six), Brazil (two) and Puerto Rico (one).

“It was a great week, and today was just more of a special bonus,” said Richard, a 22-year-old right-hander who earned two medals at the 2016 World Youth Championships as a member of Junior Team USA.

“Of course, I wanted to bowl well, and I did, but I can’t let the loss today define the week. We bowled well as a team, and I’m going to hold the memories I made close to my heart because it’s my first trip and first medals with the adult team.”

The event featured singles, doubles, trios, team and masters competition. Medals also were awarded to the top three all-events performers based on their 24-game totals.