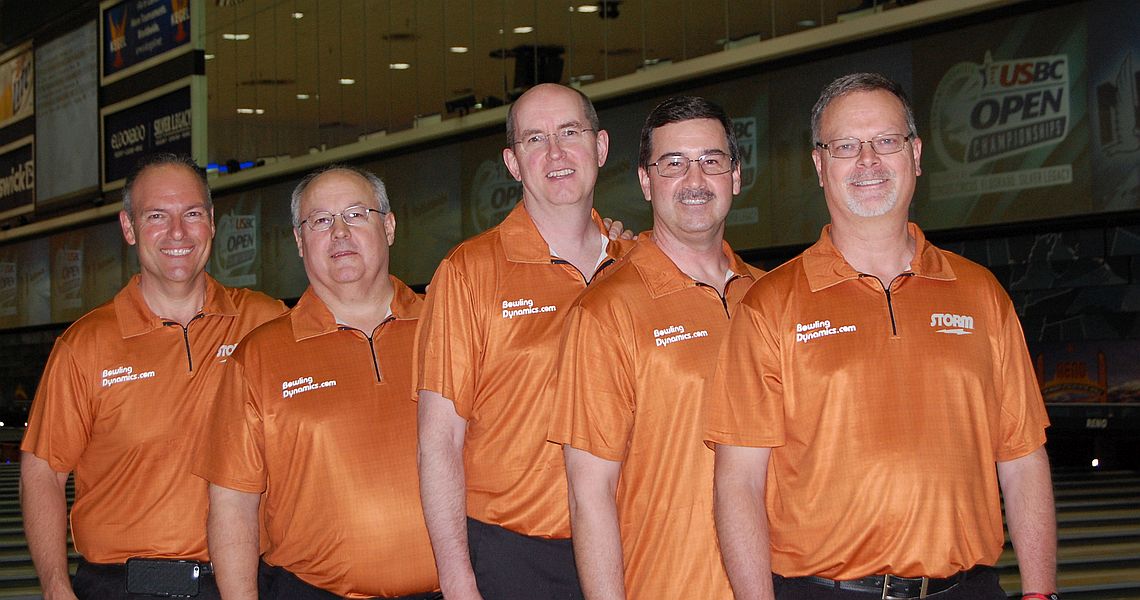 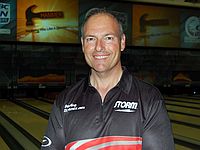 For David Cirigliano of Phoenix, team is extremely important, and nowhere was this more evident than at the 2016 United States Bowling Congress Open Championships as he helped Bowling Dynamics.com to the top of the standings May 13.

The 31-time tournament participant logged two strikes and a nine-count in his final frame at the National Bowling Stadium in Reno, Nevada, to solidify Bowling Dynamics.com’s (pictured above) place at the top of the Regular Team standings on games of 1,041, 1,154 and 1,105 for a 3,300 total. Who’s Eddie Byrd? of Fort Worth, Texas, previously held the lead with 3,241.

Cirigliano (left), who already had pair of 300 games in his tournament career, was able to string strikes again in singles May 14 and earned a spot in the record book with his third perfect game at the Open Championships. It was the fourth 300 of this year’s event.

The 50-year-old right-hander rolled games of 243, 214 and 300 for a 757 series, breaking into the top 10 in Regular Singles and joining Craig Szplett of Beecher, Illinois, as the only bowlers in tournament history with three 300s in Open Championships competition.

Cirigliano’s efforts helped Bowling Dynamics.com into the top spot in Team All-Events with a 9,710 total, which was beaten 24 hours later by HornswogglerS of Staten Island, New York, with a 9,719 performance. 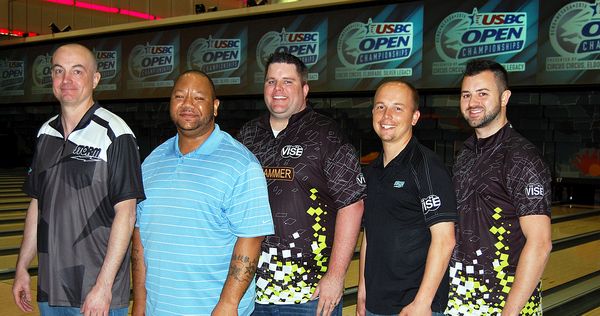 HornswogglerS of Staten Island, New York (pictured above), became the second team in 24 hours to take the lead in Team All-Events at the USBC Open Championships, doing so with a 9,719 total May 15.

Four members of the group have competed together on the biggest stage in bowling since 2013, and they refused to settle for another close call, a run that includes a runner-up finish in Team All-Events in 2013 and a missed opportunity in Regular Team at the National Bowling Stadium on May 14.

This time, though, locking up the lead landed on the shoulders of new team member Manuel Gonzales of Fords, New Jersey, who bowled doubles and singles one pair of lanes to the right of his teammates and needed a mark and count in his final frame to lift the team past the 9,710 posted by Bowling Dynamics.com of Phoenix a day earlier. 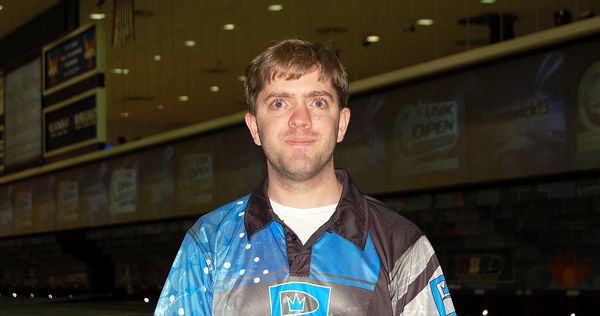 Bowling with his team, The Vick-tamizers of Lititz, Pennsylvania, the 29-year-old left-hander achieved the feat May 13 after games of 179 and 188. He finished with a 667 series and helped his team to a 3,061 total. 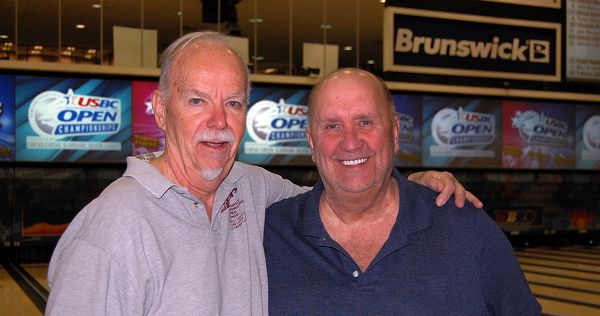 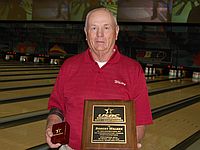 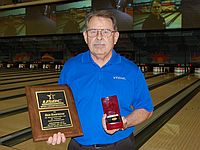 The 50-Year Club at the USBC Open Championships grew by four members this week as Robert Walker (left) of Bergholz, Ohio, teammates Ed Gronski of Mulkeytown, Illinois, and William Pavlik of Palos Heights (above, l-r), Illinois, and Ken Kasprzak (right) of Loudon, Tennessee, made their milestone marches down Center Aisle at the National Bowling Stadium.

Walker celebrated five decades of participation May 14, Gronski and Pavlik hit the lanes on the early team squad May 16 and Kasprzak competed on the evening of May 16.

This year, 19 bowlers are scheduled to reach the 50-year mark at the Open Championships.

Three more bowlers will celebrate milestones at the USBC Open Championships this week.

Alfred Jones of Southhampton, Bermuda, will become the first international player to reach 50 years of participation May 18, and he will be joined in the 50-Year Club by William Smith of New Hope, Minnesota, on May 22.

On May 24, USBC Hall of Famer Bob Hart of Suwanee, Georgia, will make his 60th appearance on the championship lanes.

Hart is a three-time titlist at the Open Championships and one of 19 members of the event’s 100,000-Pin Club, a milestone he reached at the National Bowling Stadium in 2014.