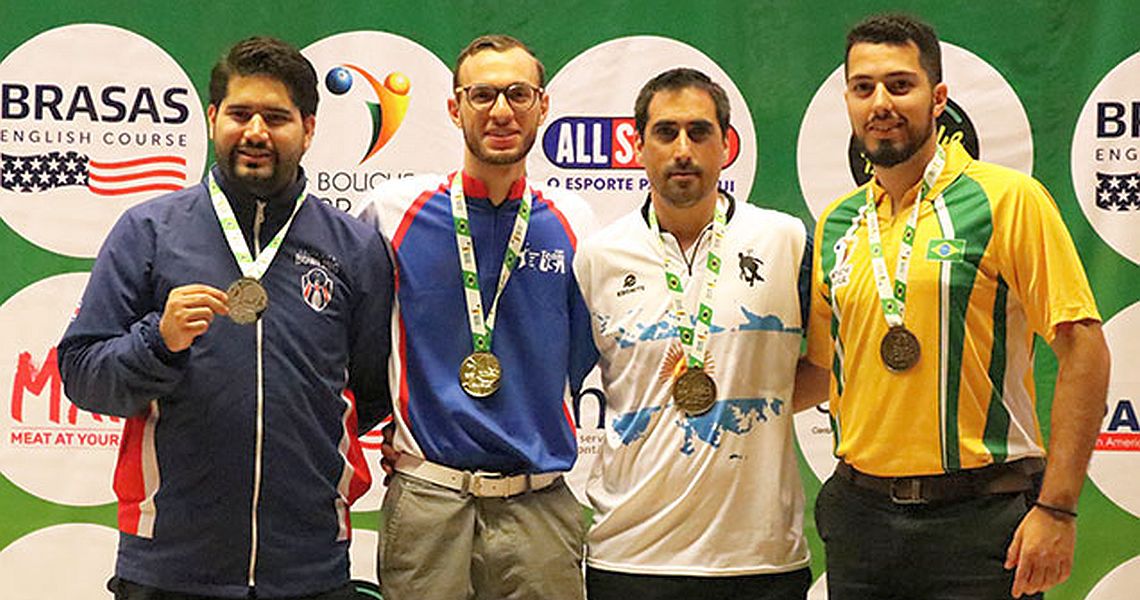 Gold for USA, Aruba in Masters at 2018 PABCON Champion of Champions

26 October, 2018
Championships
2857
Ads
Matt Russo of Millstone Township, New Jersey, may have been green when he arrived in Brazil for his international debut with Team USA, but he had the golden touch all week at the 2018 Pan American Bowling Confederation Champion of Champions event, where he won every discipline he competed in.

Neither player was able to maintain any momentum, and the title tilt at the 26-lane Bowling Social Club in Rio de Janeiro, Brazil, came down to the final frames.

Moretti stepped up with the opportunity to shut out Russo and win the match, but he missed the headpin in both the ninth and 10th frames, leaving the 1-2 combination and the 1-2-8-10 washout, respectively.

After Moretti failed to convert the washout, Russo delivered one of his best shots of the three games, securing the victory with a nine-count.

“I used the same game plan the whole week, which was to break down the lanes the same way each time, throwing the same ball in the same place, but that didn’t seem to work for the final,” Russo said.

“That last match was about grinding, and neither of us really had anything. He wasn’t able to put any pressure on me, so it really came down to making the best shots I could and staying clean.”

Russo’s flexibility to change his game plan on the fly proved to be the difference, as it was a ball he hadn’t thrown all week that carried him to the win against Moretti.

“Making the ball change was a guess,” Russo said. “I tried everything I could think of, and nothing worked. Nothing was making the corner the right way, but that ball changed direction a little quicker downlane. It turned out to be a great guess.”

Russo was dominant this week on the way to gold medals in singles, doubles (with Matt Farber of Plainview, New York) and all-events. He averaged 230.56 for his 16 games Tuesday and Wednesday, more than 17 pins better than the next closest competitor.

His 4-3 won-lost record and a 215.4 average during the round-robin portion of the Masters event was enough to earn Russo the No. 3 seed for the bracket-style semifinals. He defeated hometown favorite Bruno Costa of Brazil, 2-1, to advance to the gold-medal match, while Moretti downed top seed Lucas Legnani of Argentina, 2-1, in the other semifinal.

Costa and Legnani each earned bronze medals for their Masters finishes.

Farber failed to medal in the Masters event, finishing sixth, but he did earn the silver medal in singles and bronze in all-events, to go along with the doubles gold medal.

“It’s an incredible feeling to know that I’m going home with four gold medals,” said Russo, a two-time Team USA member. “I came here with no expectations. I just came here to bowl and have fun. It’s my first international experience, so it was special to be here and soak it all in. And, to leave with four gold medals is absolutely amazing.” 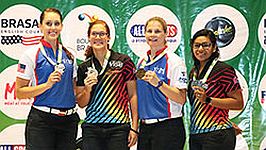 McEwan struggled with ball reaction and carry in the championship match, though she rallied in the opening game, tossing eight strikes on her last nine shots for her highest game of the week.

A handful of splits derailed her efforts in the second and third games, and Dammers-Naddall filled frames to lock up Aruba’s third gold medal of the event.

“I’m very proud to have made it this far in the tournament, especially with how the week started,” said McEwan, who did not roll a 200 game in her singles block and finished 15th overall.

“I was happy just to make the top eight and have a chance today, and to then make the medal round was a nice way to end the tournament. Losing in the title match is never fun, but I’m going to try to look at the positives and remember how far I came this week.”

Aruba’s Thashaina Seraus claimed the singles and all-events gold medals and teamed with Dammers-Naddall for the doubles silver medal. They finished behind McEwan and Kelly Kulick of Union, New Jersey.

Shortly after Thursday’s medal ceremonies, McEwan headed to the airport to catch her flight to Wichita, Kansas, where she’ll be competing in the 2018 U.S. Open, the next stop in a whirlwind 2018.

“I’ve been exhausted since about the first weekend of July, so I think I’m just running on my love for the sport at this point,” McEwan said. “It’s working out well, and I’ve been bowling extremely well lately. I’m hoping to end the long year of travel and tournaments on a good note, and I have a little break to look forward to next month.”

All competitors this week at Bowling Social Club bowled for gold, silver and bronze medals in singles and doubles (eight games each), and all-events medals were awarded based on the 16-game pinfall totals. The top eight men and top eight women in their respective standings advanced to Thursday’s Masters match play.

This year’s PABCON Champion of Champions event was the fifth edition of the tournament, first contested in 2008, and included 11 women’s teams and 13 men’s teams, each with two players.

Kayhko, Stefanidis, Stefopoulos add their names to the leaderboard in Bulgaria »