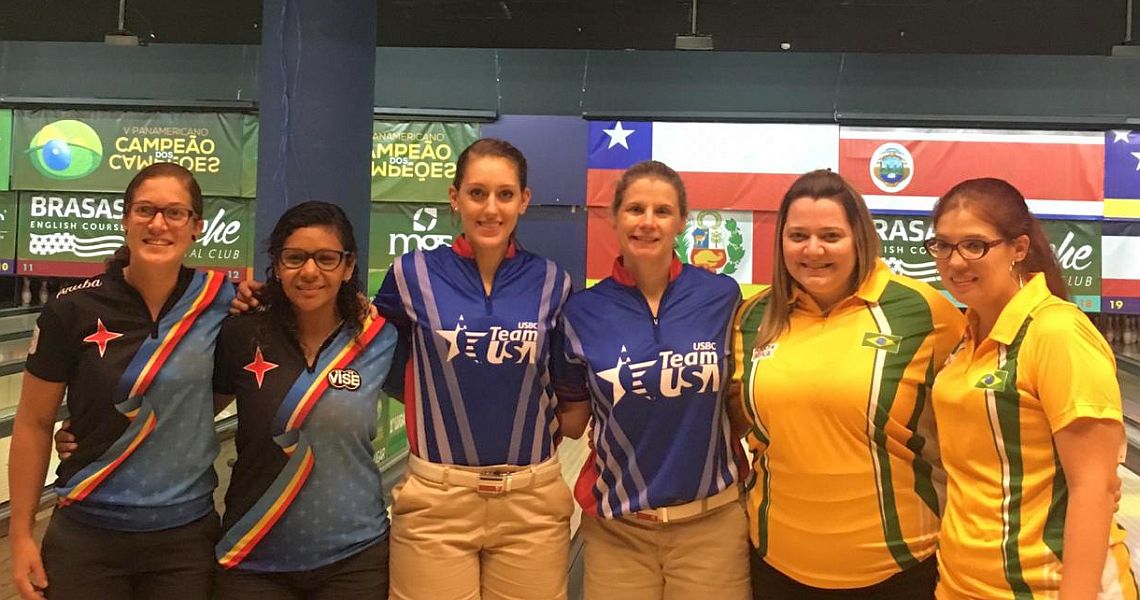 25 October, 2018
Championships
2965
Ads
For the second consecutive time, Team USA swept the doubles gold medals at the Pan American Bowling Confederation Champion of Champions event. However, while the final destination was the same for the men and women Wednesday at the 26-lane Bowling Social Club in Rio de Janeiro, Brazil, their paths to the top of the medal stand were significantly different.

The men’s doubles victory for Matt Russo of Millstone Township, New Jersey, and Matt Farber of Plainview, New York, was a continuation of the success and momentum they found while finishing first and second, respectively, in singles Tuesday.

For Danielle McEwan of Stony Point, New York, and Kelly Kulick of Union, New Jersey, doubles offered a chance at redemption after an up-and-down singles event left them with a bronze medal for Kulick and a whole new game plan for McEwan, who did not break the 200-mark during the eight-game block and finished 15th in the standings.

McEwan started doubles with a 247 game, while Kulick’s 278 effort in Game 3 helped the two build an early lead. They entered the final game just 44 pins ahead of Brazil, but another 247 game from McEwan thwarted any last-minute charge.

The longtime Team USA teammates went on to claim the gold medal with an eight-game total of 3,271, a 204.44 average. McEwan set the pace with a 1,650 individual total, and Kulick contributed 1,621.

Halfway through the finale, McEwan missed a 10 pin, an uncharacteristic mistake that ended up being a crucial turning point for her mentally. She finished the game with seven consecutive strikes, her longest string of the week.

“The back half of that game is one I’ll never forget because I wasn’t really sure what the situation was, but Brazil was going nuts, and I knew they were right behind us,” McEwan said.

“I didn’t know what we needed, but whenever I’m in that situation, the goal is to strike out. I messed up earlier in the game, and I was so frustrated at myself for missing a spare. I just kept hoping it wouldn’t cost us, and I was able to throw some really good shots when I needed them. I don’t know how, based on how I bowled the previous 15 games, but I did it, and it feels amazing to come away with the win.”

McEwan described her singles event as one of the worst performances of her career, and the disappointment was magnified because she did it while representing her country.

The 27-year-old right-hander talked through the struggles with Kulick and Team USA head coach Rod Ross, took some more notes during the men’s singles squad and returned to the lanes with some new ideas.

“We did some different things with lane play and surfaces based on what we learned yesterday,” McEwan said. “Mentally, I just tried to convince myself that looking for ball reaction or the magic ball that was going to work wasn’t the best strategy. I just needed to bowl better, so I watched some videos and went through some notes I’ve taken about what I need to do when I’m struggling. I focused on a couple physical things and tried to out bowl the terrible ball reaction I seemed to have.” 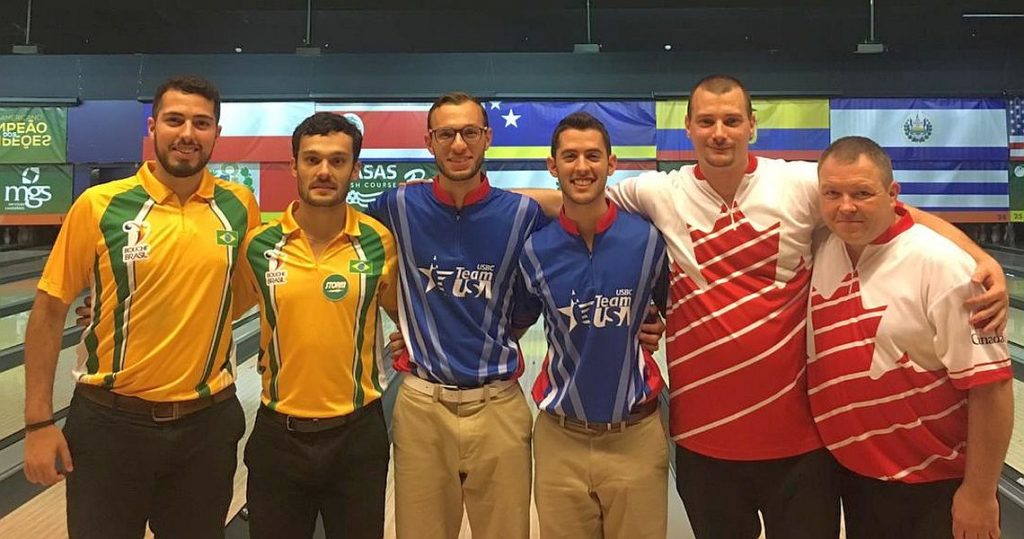 On the men’s side, Russo again was dominant on the 44-foot World Bowling London oil pattern, posting a 1,852 total for his eight games, the highest individual effort in the men’s field Wednesday by more than 100 pins. Farber added 1,617 for a 3,469 winning total.

Host Brazil claimed the silver medal with a 3,330 total, which included a 1,701 set from left-hander Bruno Costa and a 1,629 performance from right-hander Marcelo Suartz.

Just as they did in singles, Russo and Farber used a strong final game to solidify their place atop the standings. They bounced back from their lowest game of the day (390) and finished with 464.

“It’s definitely heartwarming to know we did a great job representing our country, and we get to be up on that medal stand again,” said Farber, a team gold medalist at the 2014 World Bowling Youth Championships as a member of Junior Team USA.

“Bowling’s kind of a finicky sport, where we could’ve come out here and bowled our greatest, and the pins could’ve just not fallen our way. Fortunately, we bowled very well and the pins fell. I’m extremely grateful for that, and we never could’ve done it without all the support from back home.”

Both competitors made their Team USA debuts this week in Brazil, but they weren’t unfamiliar with the pride associated with representing their country or competing in a team environment.

Russo, a two-time Team USA member, also spent two years on Junior Team USA, though he never got the opportunity to compete internationally.

“Today was a lot of fun because I got to share it with someone I’ve talked to about winning gold medals with,” said Russo, a 21-year-old two-hander who utilizes the left side of the lane.

At the 2016 PABCON Champion of Champions in Puebla, Mexico, the first time the event’s current format was used, Team USA’s Stefanie Johnson and Shannon Pluhowsky took home the doubles gold medal on the women’s side, and Tommy Jones and Chris Via got the job done on the men’s side.

All competitors this week at Bowling Social Club bowled eight games of singles and eight games of doubles, and all-events medals will be awarded based on the 16-game pinfall totals. The top eight men and top eight women in their respective standings also advanced to Thursday’s Masters match play.

McEwan’s big final game landed her in seventh place with 3,079.

The 16 remaining bowlers will return to the lanes Thursday at 8 a.m. Eastern for seven games of round-robin match play, with 20 bonus pins awarded for each win. After seven games, the top four players in each division will advance to the best-of-three bracket-style semifinals.

This year’s PABCON Champion of Champions event was the fifth edition of the tournament, first contested in 2008, and included 11 women’s teams and 13 men’s teams, each with two players.