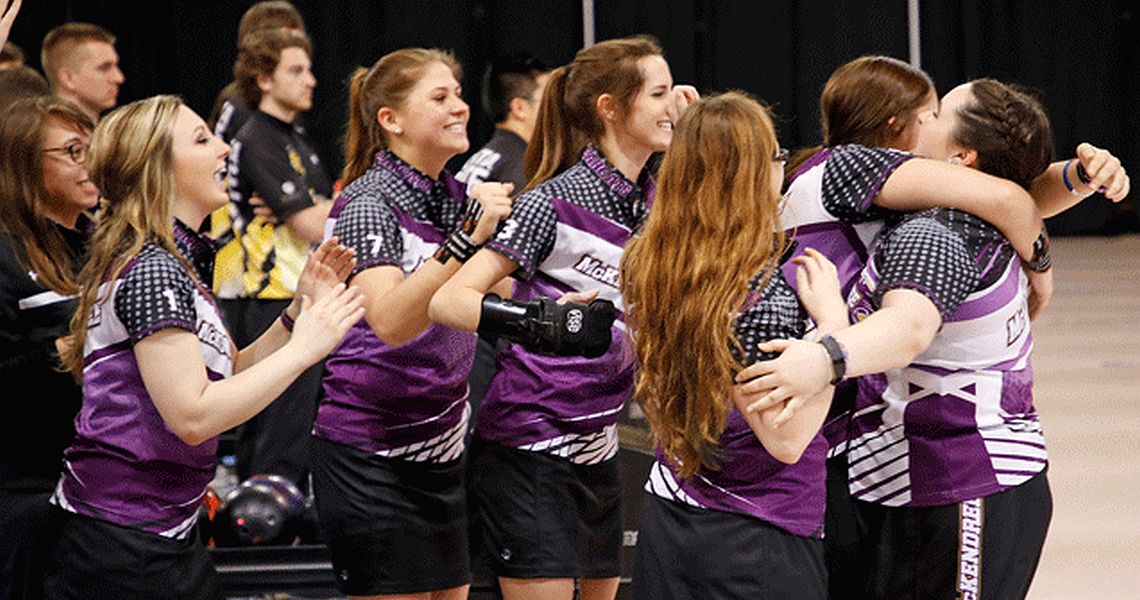 McKendree, Webber to bowl for the titles at 2017 Intercollegiate Team Championships

22 April, 2017
Collegiate
3198
Ads
The finalists at the 2017 Intercollegiate Team Championships (ITC) were determined Friday, and both the men’s and women’s title matches will feature McKendree and Webber International facing off to win the Helmer Cup.

The finals also will feature both champions from the 2016 event, as the McKendree men and Webber women will have the opportunity to defend their titles.

The men’s and women’s championship rounds will be held Saturday at the Raising Cane’s River Center in Baton Rouge, La., and taped for broadcast on CBS Sports Network in May. 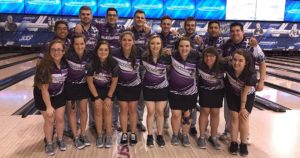 The McKendree men (pictured left with the McKendree women) went undefeated through the double-elimination bracket on their way back to the title match, topping Wisconsin-Whitewater in the best-of-seven Baker semifinal match, 4-2.

The Bearcats brought back four players from the 2016 team but relied on freshman Charlie Reid in the anchor position down the stretch.

The left-hander filled 20 pins in the 10th frame of Game 6 in the semifinals, including a 10 pin conversion on the final shot, to secure a 223-222 victory and send McKendree to its third championship appearance since 2013.

“All I was thinking about in that 10th frame was make a great shot and hit what I was looking at,” Reid said.

“When I got the first one, on the inside, I was ecstatic and wanted to show it, but I knew what I still had to do and needed to compose myself. I was probably one of the worst spare shooters on the team to start the season, so I’m thankful to my coaches for pushing me to get better and thankful that everyone trusted me in that moment. I would never have expected myself to be in that position at all. It’s an amazing feeling to help us get here.” 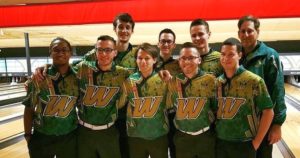 The Webber men (right) were sent to the elimination bracket by Wichita State during Thursday’s second round and made their way through three matches to set up a rematch with the Shockers in the semifinals.

After forcing a second semifinal with a 4-2 victory, the final match went down to the 10th frame of Game 7. 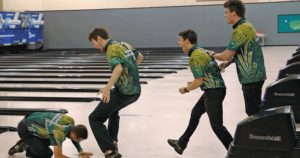 Wichita State sophomore Wesley Low left a 6-8 split to start the final frame, giving Webber sophomore Matt Russo the chance to double to force the Shockers to convert the spare. Russo delivered the double, while Low was unable to convert, giving the Warriors the 191-181 win and 4-3 victory (pictured left celebrating to make their first title-match appearance since 2012.

“If my guys got me the ball in the 10th with a chance, I was confident I would be able to do it,” said Russo, who will look to help Webber claim a second men’s ITC title.

“I told them before we started Game 7, if we get to the 10th, we’re making the show. We never backed down today and really stuck together as a team. We trusted our process and each other, and it’s an absolute amazing feeling right now.” 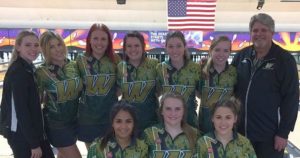 The Webber women (right) returned to the ITCs with only three players from the 2016 championship team but were able to reload on their way to a perfect record in match play.

The Warriors eliminated Stephen F. Austin in the semifinals, 4-1, and will look to become the first women’s team to successfully defend its championship since West Texas A&M won back-to-back titles in 1987 and 1988.

The Webber women have claimed three ITC titles since the program’s debut in 2010, and both the men’s and women’s team captured their respective Helmer Cup trophies at the 2012 ITC in Lincoln, Nebraska.

“Being my senior year, this means a lot,” said Taylor Bulthuis, who also made the semifinals of the Intercollegiate Singles Championships.

“Last year, we wanted it so bad for our seniors, and we have a couple of freshman who wanted it just as bad for us. We came here knowing we had to work hard, especially with a younger team that didn’t have as much experience together. We’ve really been coming together well, and it makes me so proud to go out this way. To be back in the finals is a dream come true.”

The McKendree women already had found success at the River Center last week as they claimed the 2017 National Collegiate Athletic Association Women’s Bowling Championship (pictured left), and the Bearcats had rolled through match play undefeated leading up to their semifinal match against Midland.

Midland won the first semifinal, 4-3, to force a second match, but McKendree found its look on its way to a second television appearance in as many weeks with a 4-1 victory.

“I think we are resilient,” said freshman Breanna Clemmer, who was named the NCAA Women’s Bowling Championship’s Most Outstanding Player.

“We can come back after a rough game or time and just keep coming, which is what our coach tells us all the time. It’s not unbelievable, but it’s crazy to think that we’re bowling on another TV show for another national championship. I’m really, really grateful to have these girls and coaches on my side.”

The only time a women’s team won both the NCAA Women’s Bowling Championship and the ITC title in the same year was 2011, when Maryland Eastern Shore captured both titles.

A total of 16 men’s and 16 women’s teams earned their spots in the ITC field by finishing in the top four at one of four sectional events held throughout the country in March. All teams bowled 24 Baker qualifying games Thursday to determine seeding for the double-elimination bracket.

BOWL.com’s BowlTV provided live coverage of the event leading up to the televised finals. For more information on the Intercollegiate Team Championships, click here.