Past champions tie for Doubles lead at 2016 USBC Open Championships

Andy Mills and Nick Heilman of La Crosse, Wisconsin, both 2012 Regular Team champions, once again got comfortable on the lanes at the United States Bowling Congress Open Championships and found their way to the top of the standings.

Mills (right), a 26-year-old right-hander, converted the 1-2-6-10 washout to secure a tie for the lead in Regular Doubles with a 1,341 total April 11 at the National Bowling Stadium in Reno, Nevada.

Mills actually thought the doubles mark set March 15 by Matthew Zitnik of Mayfield Heights, Ohio, and Jason Bowles of Euclid, Ohio, was about 20 pins higher, so he assumed the cheers that followed his conversion simply were in recognition of his spare-shooting prowess.

“We got off to a great start and really wanted to keep that momentum going,” said Heilman, a 33-year-old right-hander who made his 13th consecutive USBC Open Championships appearance.

“We worked as a team and tried to make the right moves through the transition. Andy had no idea what he needed, but we’re glad it worked out. Year in and year out, one of us bowls well, and it seems to alternate, so it’s nice we were finally able to both bowl well at the same time.”

Mills turned in a consistent performance this year at the NBS, adding 682 in team and 621 in singles to finish his eighth tournament appearance with a 1,987 all-events total. Heilman finished with 1,892.

Jim Grzesiak (pictured left) of Saginaw, Michigan, and Frankie May Jr. of Sinking Spring, Pennsylvania, became the newest members of the 50-Year Club at the USBC Open Championships.

Grzesiak made his 50th tournament appearance April 5-6, while May made his milestone march down Center Aisle at the National Bowling Stadium on April 11.

Grzesiak’s debut at the Open Championships came at the 1965 event in St. Paul, Minnesota. He then missed two tournaments while serving in the U.S. Navy and now has been to every event since 1968.

The annual trip to the tournament is a family affair, as Grzesiak’s team includes his brother Tom, sons Mark and Adam and nephew Brian. Together, they now have combined for 139 appearances on the championship lanes.

Even the team’s name, Tony’s Bar, is family-oriented and honors Grzesiak’s uncle, a staple in the Saginaw bowling community, who died in 1998. 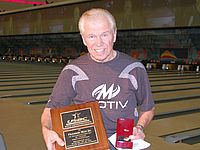 May (right) has been a familiar face at the Open Championships since opening his own on-site vendor booth at the 1996 event in Salt Lake City, but his legacy on the tournament lanes goes back decades further to the 1961 Open Championships in Detroit, where he made his competitive debut.

The 73-year-old right-hander permanently etched his name into tournament history when he marched down Center Aisle for the 50th time.

“I don’t think anybody ever realizes they’re going to make 50 years at this particular event,” said May, the fifth of 19 bowlers scheduled to reach the milestone in 2016. “And to have this as my 20th anniversary managing and owning the booth, in and of itself, is special. It’s unreal.”

On April 8, Nolan Harlamert of Dayton, Ohio, added his name to the list of bowlers who have made 55 tournament appearances, and Bob Martin of San Antonio followed suit on April 11.

There will be one BowlTV broadcast this week from the USBC Open Championships as defending Regular Team champion Team NABR of West Henrietta, New York, visits Reno to put the team title on the line.

Team NABR will hit the lanes at the NBS on April 18 at 8 p.m. Eastern.

The 50-Year Club will get two additional members this week as Wilfred Toby of Tioga, Pennsylvania, and Jules Falcone of Media, Pennsylvania, make their way to The Biggest Little City in the World on April 13 and April 19, respectively.

« IBMA announces finalists for College Bowlers of the Year