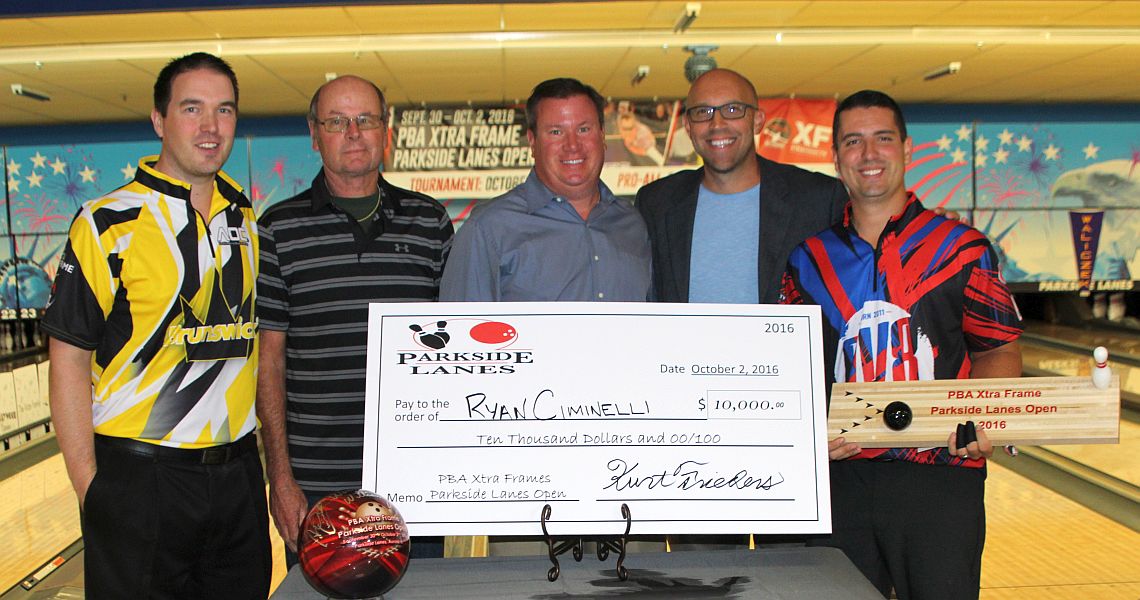 03 October, 2016
PBA National Tour
2683
Ads
Ryan Ciminelli of Cheektowaga, N.Y., converted a 244 game in his final qualifying game into his second PBA Tour title of the season, and the seventh of his career, in the PBA Xtra Frame Parkside Lanes Open in Aurora, Ill., Sunday.

Ciminelli, who sat one spot out of the stepladder finals heading into the final game of qualifying, advanced from fifth to first in his 20th game, and then survived a late charge by J.R. Raymond of Bay City, Mich., to win the title match, 232-221, to claim the $10,000 first prize.

“I was never on the show the entire tournament,” Ciminelli said, “but I’ve been working on my perseverance and it worked. I kind of felt like I was on a slide coming into the tournament after a couple of recent second-place finishes, so this one is pretty special.”

Ciminelli, who had the choice of lane conditions based on his qualifying position, selected the unusual 40-foot “strips” pattern – one of three used in the tournament, which was organized by fellow PBA Tour competitor Sean Rash.

After finding the condition wasn’t playing the way he had hoped, Ciminelli moved inside and struck on five of his first six shots to build a big enough lead to hold on.

Raymond, a sixth-year PBA member who was trying for his first PBA Tour title, was behind by 43 pins in the fifth frame, but made a ball change and threw five strikes in a row to get back into the match. Needing three strikes in the 10th to tie Ciminelli and force a roll-off, he left the 6-10 on his second try in the final frame.

Raymond advanced to the title match with a come-from-behind 207-193 win over Kristopher Prather of Milton, Fla., ending Prather’s bid for his first PBA Tour title. Prather led into the final frame as Raymond struggled to find the pocket on the PBA “strips” lane condition, which he had selected for the match.

But after rolling only one strike in the first seven frames, Raymond put together a late string of four strikes to take the lead and he won the match when Prather, needing a strike, left a solid 7 pin on his first shot in the 10th frame.

Prather, as the higher qualifier, selected the flat U.S. Open lane condition for the match and threw an early turkey to take a 23-pin lead after five frames that Williams was unable to overcome.