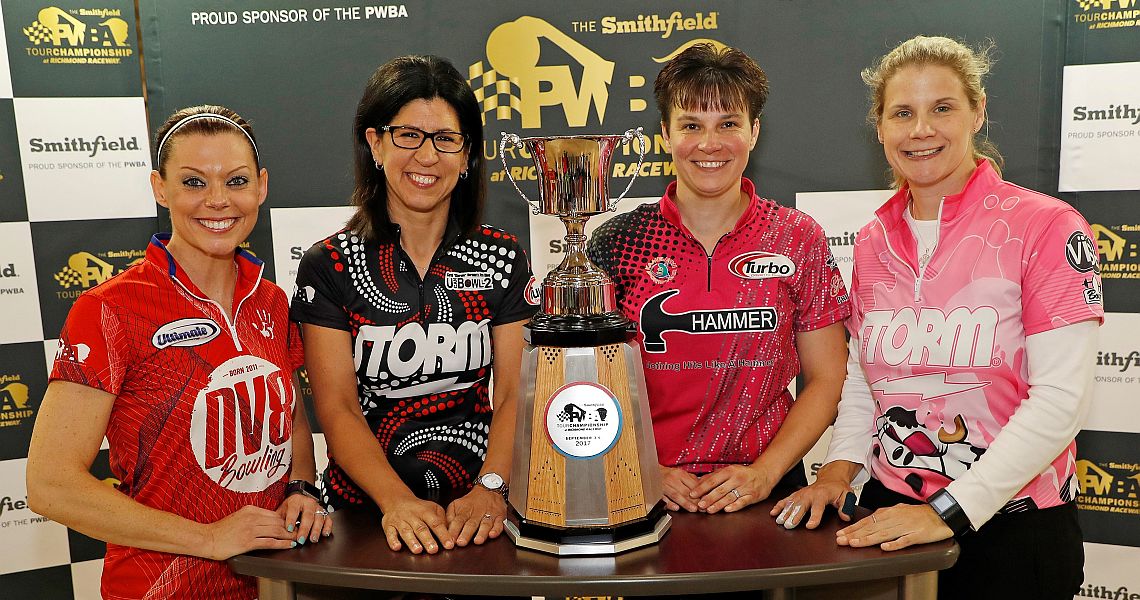 06 September, 2017
PWBA Tour
2388
Ads
The wait finally is over for Liz Johnson of Deerfield, Illinois, and Kelly Kulick of Union, New Jersey, as their opponents for the final round of the 2017 Smithfield Professional Women’s Bowling Association Tour Championship now are set.

CBS Sports Network will televise the semifinals and title match of the PWBA Tour Championship on Wednesday at 8 p.m. Eastern. As the top two players on the PWBA Tour points list this season, Johnson and Kulick automatically earned spots in the semifinals.

Johnson, who led the PWBA Tour in points this season on the way to a third consecutive PWBA Player of the Year Award, will take on Shannon O’Keefe of O’Fallon, Illinois, in one semifinal, while Kulick faces left-hander Shannon Pluhowsky of Dayton, Ohio, in the opening semifinal match.

Johnson and Kulick looked on this week at Richmond Raceway’s Old Dominion Building as the rest of the 16-player field battled through best-of-five matches in the single-elimination bracket for a chance to join them on the show, where the winner will take home a PWBA major title and a $20,000 top prize.

“I just have to be prepared to throw a lot of strikes, but I still have to stay within my own game and not worry about what anyone else is doing,” said Johnson, who is looking for her first TV win in three championship-round appearances at the Tour Championship.

“It’s 10 frames, one at a time. I’ll stick to my usual philosophy, and if the pins fall, they fall. I’ve just got to find the right ball and the right part of the lane, so the ball goes through the pins the right way.” 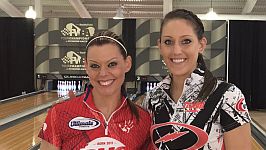 O’Keefe just missed making the TV show in the last two editions of the Tour Championship but earned her spot on Wednesday’s show with a 3-1 third-round win against her Team USA teammate Danielle McEwan (right) of Stony Point, New York, the event’s 2015 champion.

The see-saw match started with O’Keefe taking the opening game 234-233. McEwan had an opportunity to strike out for a tie, but she left a 10 pin on her final offering.

The duo had alternating wins over the next two games, before O’Keefe spared a 10 pin in the final frame of the fourth game and struck on her fill ball for a 220-216 win to close out the match. 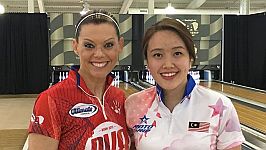 O’Keefe also had wins this week against Birgit Pöppler of Germany (3-0) and Sin Li Jane (right) of Malaysia (3-1).

“All you can do it put yourself in position to win, and I’m fortunate to now be in position to potentially win a major,” said O’Keefe, who earned her spot at the Tour Championship as the PWBA St. Petersburg-Clearwater Open champion.

“I feel really good and really confident. I’m seeing things well and making adjustment quickly. For me now, it’s just make good shots, take it one shot at a time and focus on what I can control.” 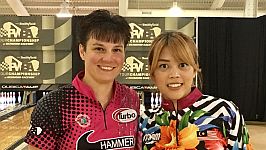 Pluhowsky averaged more than 230 in her win over Zavjalova, which included a 248-238 victory to complete the task.

Wednesday’s show will mark Pluhowsky’s third television appearance of the season, and, though she recently came up short to McEwan in the finals of the Nationwide PWBA Rochester Open, she is becoming more confident and comfortable with each opportunity under the TV lights.

“I’ve had chances on TV to win, and I haven’t been able to get it done, but I had chances to make shots to win this week, and I was able to do that,” Pluhowsky said.

“I feel like I’m kind of over the hump. I know it wasn’t TV, but it’s the same kind of pressure-filled situations, and I see that as great progress. Now, I just want to ride the momentum and see what happens.”

PWBA members qualified for the Tour Championship either by winning a title during the 2017 season or earning enough competition points. All eligible 2017 PWBA Tour champions received automatic invitations to the Tour Championship, and the remainder of the 16-player field was filled through the PWBA points list.

The PWBA Player of the Year and Rookie of the Year awards also were determined by competition points, going to Johnson and Poland’s Daria Pajak (right), respectively. 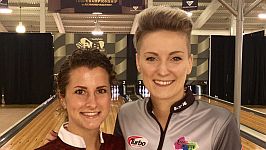 Johnson mathematically locked up her third consecutive award prior to the start of the Tour Championship. Pajak had a chance to claim hers with a first-round win Tuesday, which she failed to do, but went on to earn the honor when England’s Verity Crawley came up short in her second-round match against Zavjalova (left, l-r).

All rounds of the PWBA Tour Championship leading up to the TV finals were broadcast on Xtra Frame, the exclusive online bowling channel for the Professional Bowlers Association.

The lanes were specially installed inside the Old Dominion Building by QubicaAMF, the official supplier of bowling equipment for the 2017 Smithfield PWBA Tour Championship.

Championship round will be televised live at 8 p.m. Eastern on CBS Sports Network; winners meet for the title.

U.S. girls sweep medals in U21 division at PABCON Youth »