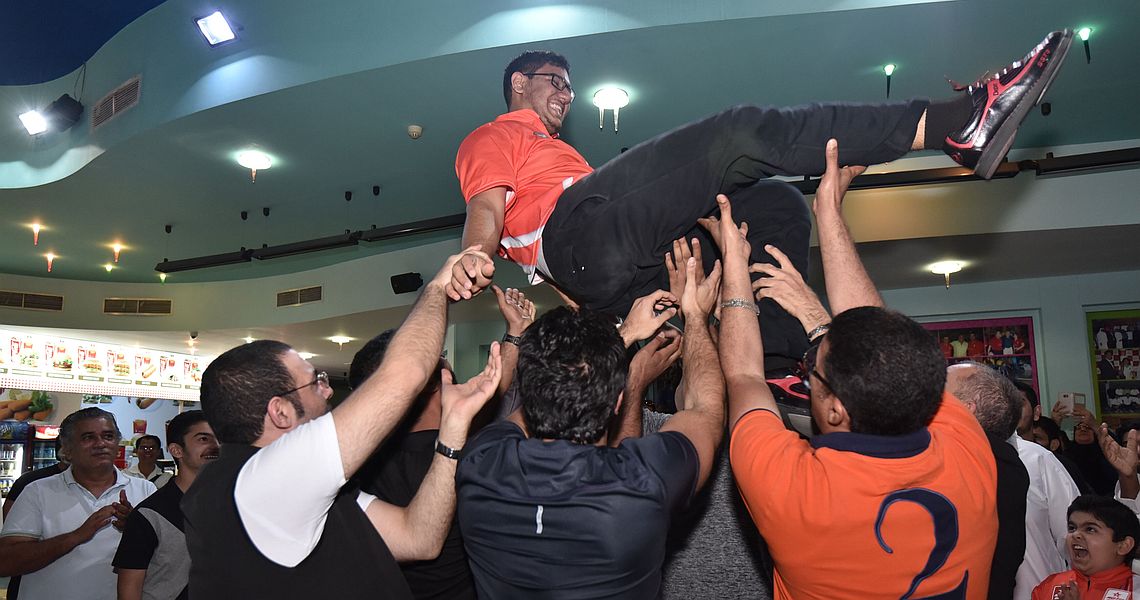 The top-seeded Bahraini (pictured left), who received seven pins youth handicap per game, had the advantage of having to lose two games to suffer defeat.

Pictured above are the Round 5 finalists.

In a low-scoring opening match, Palermaa (above right), a 13-time European Bowling Tour titlist who was looking to win his sixth career PBA title in Bahrain, eliminated Yousif Falah (left) of Bahrain, the runner-up in the H.H. Emir Cup in Qatar last week, 179-165.

Palermaa carried the momentum into the title match handing Al-Awadhi his first defeat, 234-230. Down by 43 pins in the seventh frame, Palermaa struck on his last five shots while his opponent suffered a split in the 10th frame which he failed to convert.

Al-Awadhi started the decisive game with five strikes and added a double after he failed toconvert another spit in the sixth frame to hold a 32-pin lead heading into the last two frames. The 17-year-old spared in the 9th and 10th frame to put the game and the match away, 240-220.

Palermaa, who rolled the first 300 game of the tournament in qualifying to earn a $1,000 bonus, hovered at or near the top in Round 5 and held a 54-pin leading heading into the final game. Averaging 253.2 for the first five, the two-hander finished with his low game of 209 and slipped to second place with 1475.

Falah closed his set with 244 and 268 to climb from seventh to third place with 1452. Tommy Jones, United States, who was in the top 3 after any of the first five games, slipped out of the stepladder finals to fourth place with 1414 which ended his bid for his his 17th PBA title.

Fresh off her victory in the H.H. Emir Cup 2016 in Qatar last week, Danielle McEwan (left), United States, was one of two women, who made the cut to the top 12 players. After a slow start into Round 5, McEwan overtook Colombia’s Anggie Ramirez (right) in the last game (201-160) to win the women’s ranking in Bahrain.

McEwan finished in 8th place with 1342 and Ramirez was 10th with 1317, both scores including 42 pins women’s handicap.

Anthony Simonsen, United States, who has won two PBA titles in the 2016 seasaon including the USBC Masters, fired the third 300 game of the tournament in his third game, but had to settle for 6th place with 1367 after finishing with 185, 174 and 214.

The 14th Kingdom of Bahrain International Bowling Championship is the second tournament on the 2016 World Bowling Tour and an Asian Bowling Federation Tour ranking tournament, the second event of the 2016 ABFT season.

According to an agreement between World Bowling and the Professional Bowlers Association (PBA), the Bahrain Championship will award a PBA title, if won by a PBA member.

Total 30 players advance to the finals on Tuesday and Wednesday, March 8 & 9, including the top 27 qualifiers, the next Bahraini and Bahraini youth bowler and the next female bowler.

Rounds 2-4 consist of six games scratch with the top six players advancing to the next round. The remaining 12 players will bowl a final six-game block scratch before the cut to the top three players for the stepladder finals.

The No. 2 seed bowls the No. 3 seed in the semifinal match. The winner of that game takes on the top-seeded player for the title and the US$25,000 first-place check. According to the tournament rules, the No. 1 seed must be defeated twice to win the title.

The next stop of the 2016 World Bowling Tour is the Brunswick Euro Challenge, which will be held from March 13-20 at Dream-Bowl Palace in Munich, Germany.

The picture shows the Round 5 finalists.

Players with position, country and earnings

« U.S. Open to take place in Las Vegas this fall

Jesper Svensson historic as February Bowler of the Month »