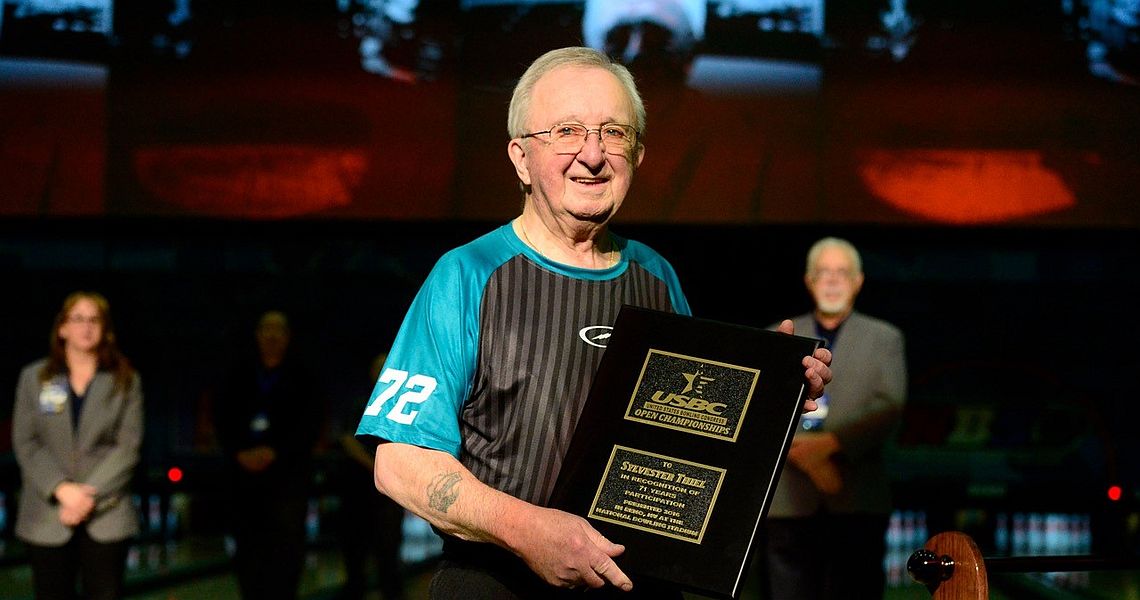 17 March, 2016
ChampionshipsOpen Championships
1649
Ads
Sylvester Thiel of Lake City, Minnesota, may not own a coveted eagle trophy from the United States Bowling Congress Open Championships, but he’s still one of the most celebrated and decorated bowlers who has marched down the famed Center Aisle.

The 93-year-old’s time on the tournament lanes has yielded him two priceless rewards – love and longevity – and he was recognized for the latter Wednesday at the National Bowling Stadium as he made his record-tying 71st appearance at the USBC Open Championships.

He is one of three bowlers in 113 years of Open Championships history to reach 70 years of participation and now sits atop the all-time participation list with USBC Hall of Famers Bill Doehrman of Fort Wayne, Indiana, and Joe Norris of San Diego.

Thiel made his tournament debut at the 1940 event in Detroit, where he nervously hit the lanes armed only with one ball and some simple advice from 1939 Regular Team champion Charley Kotarski.

Thiel’s arsenal still includes just one ball, and as the sage veteran, he offered the same advice to 21-year-old first-timer, Ken Buxengard, whom he recruited to join his team this year.

“Charley was a great bowler and one of the guys who really taught me a lot back then,” Thiel said. “He gave me the same advice I gave Ken, and that was to just relax and bowl like you do in league. Don’t put any pressure on yourself or be afraid to try anything. You only get one shot at it each year.”

Thiel has had a memorable career with big scores and special accolades, but perhaps his biggest accomplishment at the Open Championships actually came off the lanes.

While at the 1965 event in St. Paul, Minnesota, Thiel met a young lady named Phyllis, who was handing out fliers to promote a tournament being held in conjunction with the Open Championships.

Within a few months, Phyllis moved to Michigan to help Thiel at the 70-lane bowling center he managed, and they’ve been together since. Before long, they had their own bowling center, a venture that lasted until 1977, when they sold it and moved back to Phyllis’ hometown of Lake City.

“When I got to Lake City, the bowlers there had never heard of the Nationals, and I couldn’t believe it,” Thiel said. “I was able to put together a team to take to the tournament, and we were able to find a companion team, too. Lake City became a bowling town. We’ve pretty much had the same core group since 1978, and we even used to take 32 bowlers to the Petersen in Chicago every year.”

Thiel gives his wife and dedicated teammates much of the credit for his return to the Open Championships each year, but he also jokes that his doctors are just as important.

“He had some health problems in December, and he was concerned he might not be able to make it, but here we are,” Phyllis Thiel said. “Now, he’ll go home and tell the doctor to keep him going for one more year because everyone’s really looking forward to Vegas.” 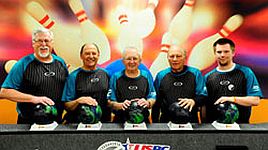 Thiel’s team includes Eugene Becker, who made his 36th tournament appearance, Bruce Ohlhaber, who competed for the 27th time and John Sexton, who made his 25th march down Center Aisle on Wednesday.

Phyllis will join the group on the lanes Thursday afternoon at 4 p.m. Eastern, so she can bowl doubles with Thiel, as she has nine previous times since her debut in 2002.

“Don’t let him tell you any differently,” Phyllis Thiel said. “This year’s event has been in the back of his mind for a long time, and he’s already thinking about No. 72.”

Svensson, Kulick add their names to the leaderboard in Munich »