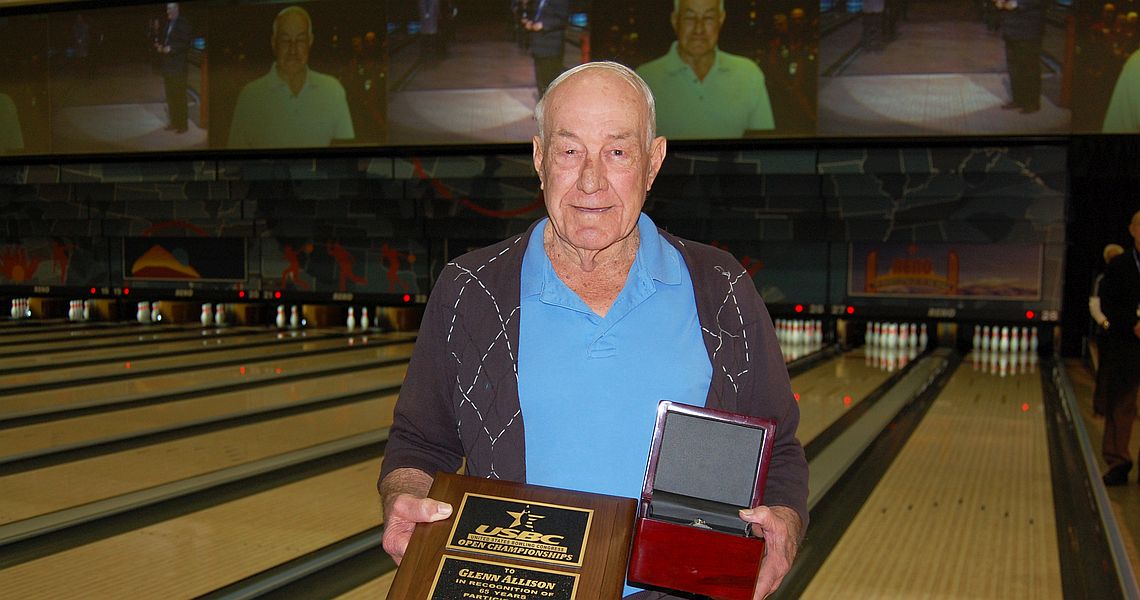 The 85-year-old right-hander made his milestone march down Center Aisle at the National Bowling Stadium in Reno, Nevada, on May 17 and received a plaque, chevron and custom ring to commemorate the achievement (pictured above).

“Walking down that aisle is something I love doing every year, and it’s a thrill to be here,” said Allison, a four-time Open Championships titlist.

“Amazingly, I didn’t really know what this tournament was about until 30 years later when I looked back on the memories. I’ve made great friends over the years, and some I’m still chasing in pinfall.”

Allison, who made his Open Championships debut at the 1947 event in Los Angeles, was joined on the lanes at the NBS by his longtime teammate and fellow hall of famer, Jimmy Schroeder of Tonawanda, New York, the 1976 Classic Singles champion and a 68-time tournament participant. 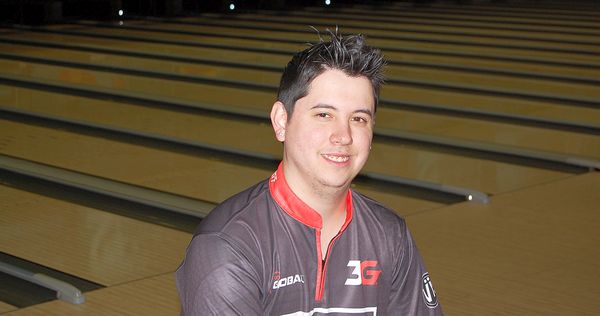 Jakob Butturff (pictured above) of Chandler, Arizona, now is the man to beat at the 2016 USBC Open Championships after throwing one of the biggest shots of his career May 21 at the National Bowling Stadium to sneak into the lead in Regular All-Events with a 2,124 total.

The 22-year-old left-hander calmly struck on his last shot to move past Robert J. Bures of Painesville, Ohio, who held the lead for more than two months with 2,122.

“I knew I needed a mark and good count in the 10th, and when I left the 7 pin, the first thing I did was take an extra deep breath,” said Butturff, who finished his third USBC Open Championships appearance with 721 in doubles, 715 in team and 688 in singles.

“It’s easy to get frustrated in that moment and make a huge mistake, so I made sure to regroup and make the spare. Then, I threw one of the best shots of my life.”

One squad later May 21, Greg Thomas of Irmo, South Carolina, and Chris Hill of Franklin, Wisconsin, moved into the lead in Regular Doubles with a 1,401 total.

The duo surged into the top spot with a 562 final game, which included a 296 game from Hill and 266 from Thomas. Thomas led the overall effort with a 720 series, and Hill added 681.

Jim Rollins of Mount Juliet, Tennessee, and Alfred Jones of Southhampton, Bermuda, each celebrated 50 years with a twist this week at the USBC Open Championships, while Bill Smith of New Hope, Minnesota, also reached the coveted 50-year plateau.

Rollins, an 82-year-old right-hander, became the 200th member of the event’s 50-Year Club on May 17, while Jones, 81, became the first international competitor to reach the milestone May 18. Smith, 76, added his name to the list May 22.

Smith’s Open Championships debut came in Detroit in 1961, Jones’ first tournament appearance came in Oakland, California, in 1964 and Rollins made his first trip down Center Aisle three yea rs later at the 1967 event in Miami.

Each bowler received a plaque, chevron and special lapel pin to commemorate the milestone.

After years of supporting their husbands, boyfriends and significant others at the USBC Open Championships, Belle Garcia and her friends decided they should take advantage of the trip and bowl as well.

Four years later, their appropriately named team, We Are Here Anyway of Naperville, Illinois, found its way to the top of the leaderboard in Classified Team with a 2,702 total May 19 at the National Bowling Stadium after posting games of 909, 935 and 858.

There will be one live stream broadcast from the USBC Open Championships this week as defending Regular Doubles champions Mark Sleeper Jr. of Kaufman, Texas, and two-hander Anthony Simonsen of Princeton, Texas, make their way to the National Bowling Stadium to put their title on the line May 29 at noon Eastern.

Sleeper owns a perfect game at the Open Championships, which came at the NBS in 2014, and Simonsen is having a memorable 2016, which includes becoming the youngest bowler in Professional Bowlers Association Tour history to win a major, claiming the 2016 USBC Masters title in February, just after his 19th birthday.