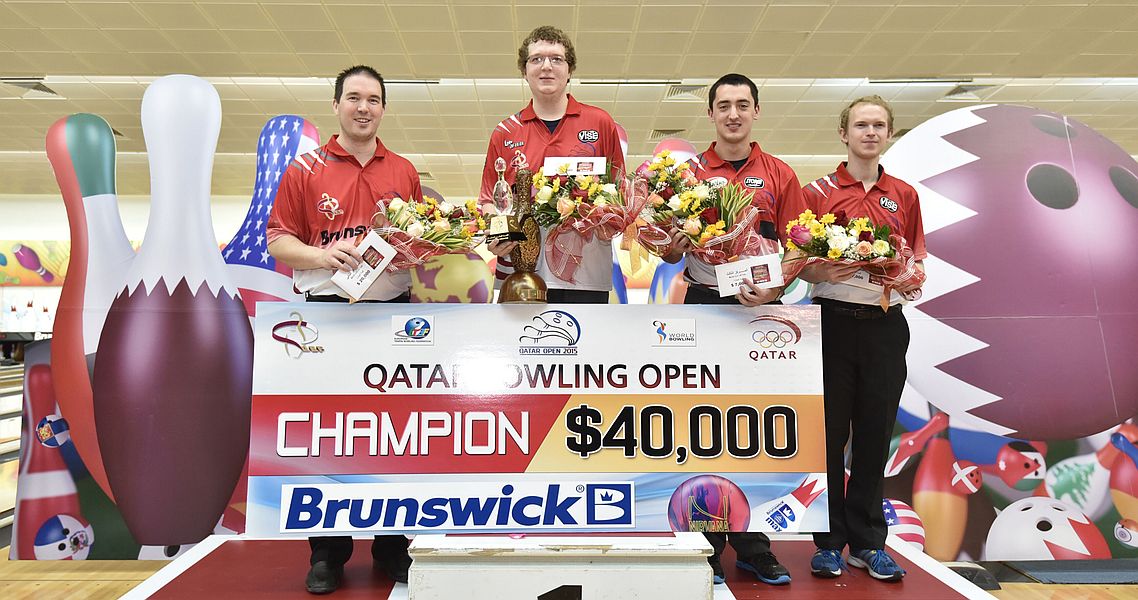 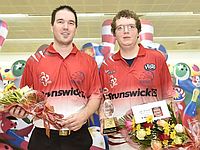 It marks the first victory for Weier on the European Bowling Tour, the World Bowling Tour and also on the Professional Bowlers Association Tour.

Weier, who led the qualifying en route to make his third consecutive championship round appearance in Qatar (2013 – 3rd; 2014 – 4th), took a 21-pin lead after the first game, 218-197, and started the second game with a six-bagger to put the match practically out of reach for Rash. 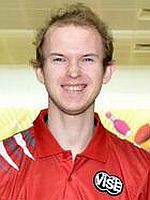 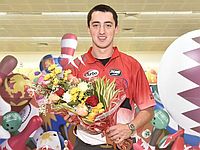 In the semifinals, Rash, seeded second, met No. 3 seed, Thomas Larsen (left) of Denmark, who was looking for his third PBA title. Rash took a 57 pin lead after winning the first game, 267-210, and maintained his lead despite losing game two, 214-257, to advance to the title match.

The other semifinal match was a strike fest in which Weier fired games of 264 and 278 to eliminate former Robert Morris University teammate and No. 1 seed, Marshall Kent (right), United States, who had back-to-back 258 games, 542-516. Kent posted the tournament’s fifth 300 game in Round 2 on his way to earn the No. 1 seed for the playoffs.

Rash received $20,000 for second place while Kent and Larsen pocketed $7,000 apiece for third and fourth place.

The other 33 finalists bowled six games scratch with the top 18 advancing to the second round. Those 18 and the 10 qualifying leaders rolled another six-game block scratch to cut to the top 4, who advanced to the semifinals.

The No. 1 bowled No. 4 and the No. 2 bowled No. 3 with the two-game total pinfall determining the winner. The two semifinal winners bowled for the title in the championship match over two games total pins.

The top 50 men and the top 50 women in each event received ranking points. Those points were tabulated throughout the season to determine the top 12 men and top 12 women, who will compete in the 9th EBT Masters July 25, 2016 at Rose’n Bowl in Serravalle, San Marino following the 12th San Marino Open.

The 2015 World Bowling Tour, which actually got underway in November 2014, consists of 19 tournaments in 12 countries, eight in the Middle East, seven in the U.S., and two each in Asia and Europe, including seven “majors” (double ranking points) and 12 regular tournaments.

If a member of the Professional Bowlers Association (PBA) wins a World Bowling Tour event, it counts as a PBA title.

Players earn ranking points based on how they finish in each event. The current points system is based on a continuous two-year cycle, so all points from the 2014 and 2015 are added to determine the points list.

The top three men and top three women in the points list will compete in the season-ending WBT Finals in Indianapolis on Feb. 13, 2016. The qualifying standings for the World Bowling Tour Finals are different to the WBT Ranking as they include all WBT events since Nov. 1, 2013. 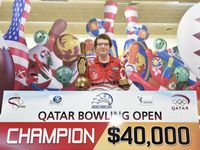 Players with position, country and earnings.

Top 18 advance to the second round

Tie Rule Round 1 & 2
Ties influencing who will qualify for the next final step will be broken by playing a 9th and 10th frame roll off, repeated until the tie is broken. In all other tie situations in step 1-2, a procedure similar to the procedure for the qualification will be followed.

« 2015 European Bowling Tour comes to an end in Qatar