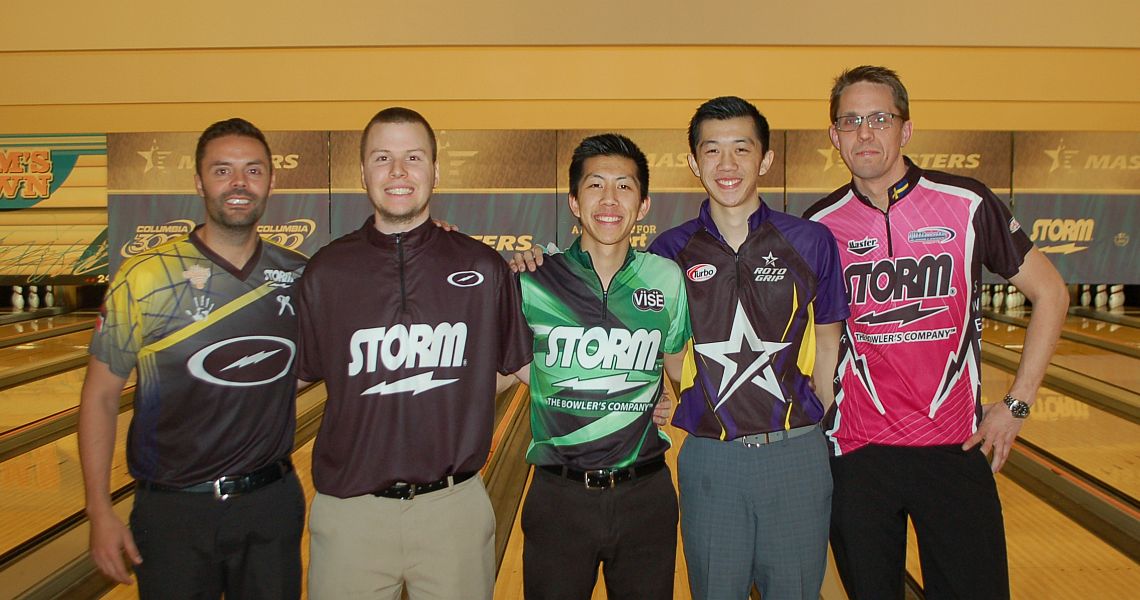 The 33-year-old entered the day as one of eight players remaining in the winners bracket and rolled sets of 722, 711 and 722 at The Orleans Bowling Center in Las Vegas, defeating England’s Dom Barrett, close friend Bill O’Neill of Langhorne, Pennsylvania, and Alex Hoskins of Brigham City, Utah.

The victory over Hoskins earned Belmonte the top seed at the USBC Masters for the second time in his career. He has a perfect record on Masters telecasts, winning the tournament in 2013, 2014 and 2015 from the No. 1, No. 5 and No. 2 seeds, respectively.

The 2017 event features a total prize fund of nearly $300,000 and is a major event on the Professional Bowlers Association Tour. The finals will be broadcast live on ESPN on Sunday at 1 p.m. Eastern, with $30,000 and the coveted Masters trophy going to the winner.

“Right now, I’m not even thinking about winning again,” said Belmonte, who owns 13 PBA Tour titles, including seven majors. “I’m just really happy with today because I was able to execute really well and was able to put up three solid sets. I’ll probably start strategizing a little tonight, but most of the decisions will come tomorrow based on who’s on the show and where they’re playing.”

Hoskins, a 24-year-old right-hander competing in his first Masters, earned the No. 2 spot in the stepladder after notching wins against Chris Barnes of Double Oak, Texas, reigning Professional Bowlers Association Player of the Year EJ Tackett of Huntington, Indiana, Argentina’s Lucas Legnani, USBC and PBA Hall of Famer Pete Weber and Sweden’s Martin Larsen, before falling to Belmonte in the match to determine the top seed.

“It’s a dream come true to even have the opportunity to bowl for a spot on the show,” said Hoskins, who is looking to become the first amateur to win the Masters since Arizona’s Brett Wolfe in 2002.

“I grew up around bowling and bowling centers, always trying to learn and get better as a bowler. My goal was to make the first cut and then apply everything I’ve learned to get through each round. Then, I was able to stay in the process this week and not let any emotions get in the way.”

Belmonte and Hoskins will be joined on the show by brothers Darren and Michael Tang of San Francisco and Martin Larsen, who survived the four-player final elimination match that determined the last three seeds.

Darren Tang won the shootout, flirting with perfection on the way to a 289 game and 742 series, and he will be the No. 3 seed for the show. Michael Tang’s 716 set was enough to take the No. 4 spot, and he’ll face Larsen, last year’s sixth-place finisher (652), in the show’s opening match. Bill O’Neill shot 559 in the shootout and was eliminated, finishing sixth.

Both Darren Tang and Larsen have runner-up finishes in PBA Tour events, while Michael Tang won the 2015 Intercollegiate Singles Championships under the TV lights. Sunday will mark the first national TV appearance for Hoskins.

The last time brothers met on a PBA Tour telecast was at the 1994 PBA National Championship, when David Traber defeated his brother Dale Traber in the title match. The last time two brothers met in the stepladder finals at the Masters was 1980 when Neil Burton defeated his brother, Nelson (Bo) Burton, in the semifinal, before topping hall of famer Mark Roth for the title.

Defending champion Anthony Simonsen of Austin, Texas, fell to Mike Dole of Loves Park, Illinois, in the final set of matches in the elimination bracket Friday to end his reign as Masters champion.

Competitors in the 395-player field this week bowled 15 games of qualifying, before a cut was made to the top 63, who joined Simonsen in the double-elimination match-play bracket.

Three highest scores advance to ESPN finals, high score is No. 3 seed, second high is No. 4, third high is No. 5, lowest score is eliminated, earns $6,700.