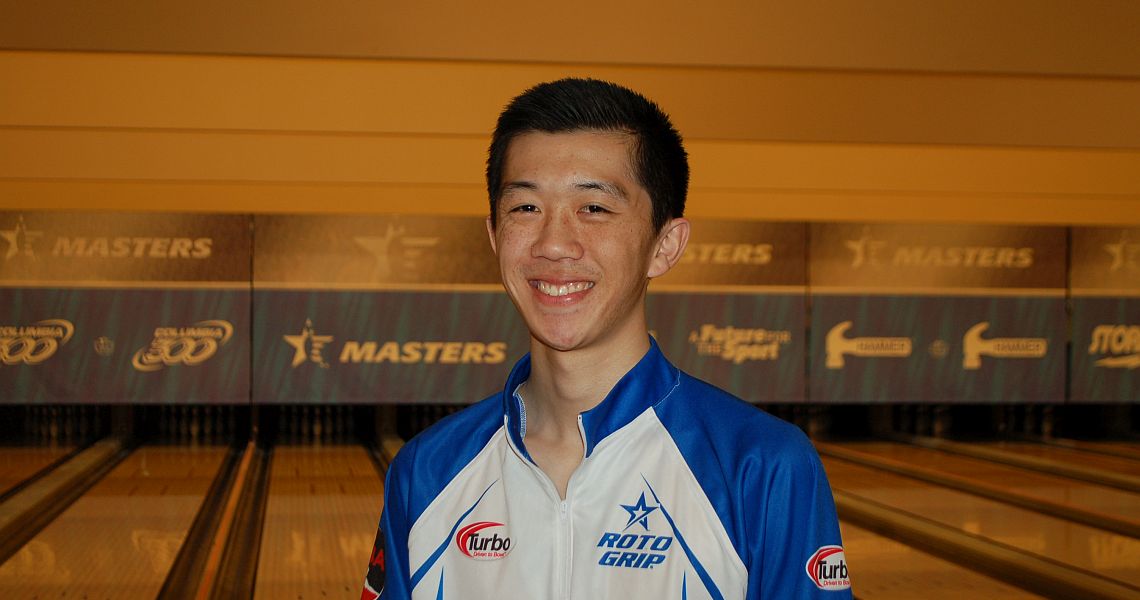 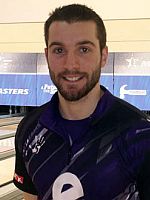 For the second consecutive day, amateur Nick Kruml of Downers Grove, Illinois, is among the leaders at the United States Bowling Congress Masters, and, as has been the case at various points of his bowling career, he’s on the cusp of a breakout performance.

The 23-year-old right-hander (pictured right) has averaged more than 237 through two days of qualifying at The Orleans Bowling Center in Las vegas, and his 10-game total of 2,378 is third among the 395 competitors at the USBC Masters this week.

Kruml also was third after Tuesday’s opening round, just three pins short of a share of the lead on this week’s 40-foot oil pattern.

Collegiate standout Michael Tang (pictured above) of San Francisco holds the top spot after two rounds with a 2,479 total, a 247.9 average. He opened the event with a 296 game and found his stride again Wednesday for the highest block of the day, a 1,261 effort (252.2 avg.).

Three-time Masters champion Jason Belmonte (left) of Australia is second with 2,416, England’s Stuart Williams (right) is fourth with 2,362 and Steve Pavlinko Jr. of Sewell, New Jersey, rounds out the top five with 2,358.

First round leader Tom Smallwood of Saginaw, Mich., dropped to 10th place with 2,326.

Kruml is in familiar territory, having advanced to the double-elimination match-play portion of the event in 2015 and 2016, but he’s looking to improve on those performances, which ended with 1-2 records and early exits.

The two-time first-team All-American at Wisconsin-Whitewater keeps putting himself in position for something great to happen, as he did at the 2013 Junior Gold Championships and again at the 2017 USBC Team USA Trials, but he’s still waiting for a defining moment on the lanes.

In 2013, Kruml was the top qualifier at Junior Gold and earned a spot on Junior Team USA 2014, but he was unable to finish the job, ultimately finishing third in the bracket portion of the tournament.

At the Team USA Trials this year, he felt he bowled well, but one disappointing outing in the five-day event took him out of contention for a spot on Team USA.

Instead of accepting the close calls as defeats, Kruml is using them as motivation to work harder to get over the proverbial hump. But, now that his collegiate bowling career is over, preparing for competition is a little different.

“When you’re bowling in college, you’re bowling just about every weekend and practicing during the week,” said Kruml, who works in a pro shop and plans to spend the next year or two trying to make a career out of bowling.

“Now that I’m on my own, I try to bowl as much as I can and then stay sharp by bowling in a lot of tournaments. I also practice on different patterns and focus on being able to play different angles and use a variety of releases.”

Kruml and the rest of the Masters competitors will have five additional games Thursday to secure their spots in match play, where they’ll join defending champion Anthony Simonsen of Austin, Texas. That’s where Kruml hopes the experience he gained at the last two Masters will pay off.

After two rounds, Simonsen is in a tie for 58th place with a 2,160 total, just inside the cut line. Should he finish outside the top 64, he’ll earn the final spot in the bracket, and the top 63 players overall will join him. He still can improve his seeding with a strong final qualifying day.

“I’ve been able to get into a spot with urethane that allows me to have a little bit of miss room right and left,” said Tang, a senior at San Jose State University and the 2015 Intercollegiate Singles Championships winner.

“As they’ve developed, it has gotten better for me because I can parallel left and get more aggressive with my hand, which is my strong suit. The lanes have been really coming to me so far, so we’ll see how the burn squad goes tomorrow.”

All competitors at The Orleans this week will bowl 15 games of qualifying over three days to determine the match-play field. Three-game total pinfall will determine who advances in the bracket.

Qualifying concludes Thursday, and match play will take place Friday and Saturday to determine the five players for the championship round. Those five bowlers will compete in the stepladder finals, live on ESPN at 1 p.m. Eastern on Sunday, Feb. 26.

The 2017 Masters features a total prize fund of nearly $300,000 and again is a major event on the PBA Tour. The winner will take home the coveted Masters trophy and $30,000 top prize.