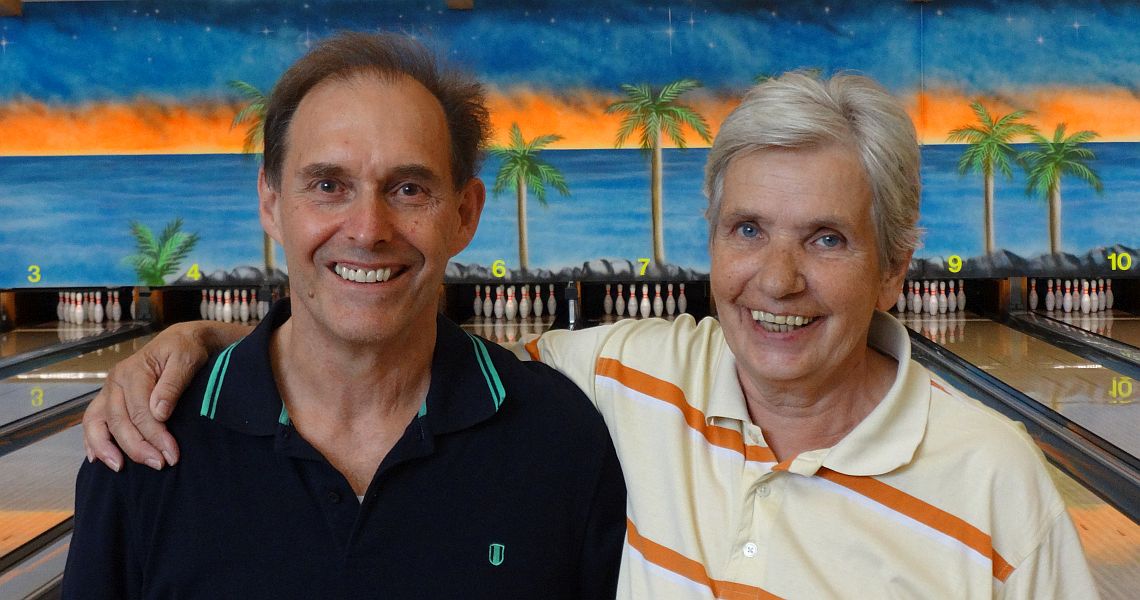 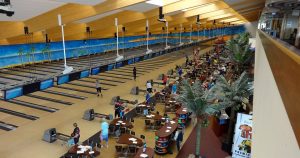 Marett Schiller and Helmut Ulber of Germany walked away the winners in the 3rd Senior Open Sunday, Sept. 4, at Dream-Bowl Palace in Munich, Germany.

In the women’s championship match, Schiller defeated Liliane Vintens of Belgium, 209-174, while Ulber topped Ron Oldfield of England in the men’s title match, 244-220.

The seventh stop on the 2016 International Seniors Bowling Tour was the third visit of the year to Germany, this time to Dream-Bowl Palace (pictured right), Europe’s biggest bowling center with 52 lanes on one floor.

The ISBT Masters finals for the 2015 season were held on Saturday (winners were Oldfield and Marianne Pelz, Germany), so the entry list was exceptionally strong, with 110 men and 32 women from 20 countries.

The format for the tournament was a single six-game qualifying block with unlimited re-entries. For those not able to qualify through the main leaderboard, there were additional opportunities through Scratch series, Turbo games, Early Bird qualification and a Desperado squad.

Qualification started the weekend before the finals for the Early Birds and in the men’s section there were scores over 1400 for Germany’s Hermann Wimmer, Helmut Ulber Matthias Kabel and Italians Loris Masetti and Stefano Michelini, which would guarantee them finals places.

Qualification squads resumed on Wednesday, and the scores for that day were lower than the previous weekend. The first squad on Thursday saw a squad win for a lady, Sabine Leutwiler of Switzerland, who had a very good block to finish with 1375.

The second squad saw the arrival of many of the players from further away, and straight into the qualification lead went Ron Oldfield with 1482. Others scoring over the 1400 mark were Belgians Robert Vallons and Desimio Giorgio as well as Alan Jenkins of England. 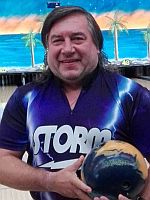 There was more good scoring during the Friday squads, led by Ingar Gabrielsen of Norway with 1467.

There were three final squads on Saturday. The early morning start for the first squad produced the first 300 game of the tournament for Valentin Fatu (left) of Romania, which would guarantee him a finals place through the Turbo system.

The second squad of the day saw the first blocks over 1500, an outstanding 1598 for Carlo Greulich of Germany and 1510 for Lol Ellis of England. Liliane Vintens of Belgium secured her qualification place with 1364 in the ladies’ section.

The final qualification squad was comfortably won by Alain Aubert of France with 1457. 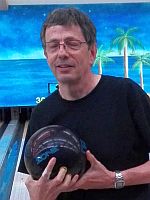 The top 24 men from the qualification list were now guaranteed finals places, along with five Early Birds, seven Scratch and two Turbo qualifiers. There remained just two Desperado places for the men, and one for the ladies.

30 men and 4 women entered the Desperado squad, bowled over a single game. Pierre Prou (right) of France started well with a run of strikes, which just kept coming. By the tenth frame he was certain of qualifying, and everyone was watching to see if he could make it twelve strikes for a perfect game.

Prou duly obliged to the great appreciation of the large watching crowd. Ernst Blasits of Germany also had a bunch of strikes to finish with 268 scratch for a 269 total. In the ladies’ section, Maria Grazia Locatelli of Italy was putting her age bonus to good effect, opening up a lead by closing frame after frame. However, a big split in the 8th frame left the door open for the others, and Kimberly Oakley of England put together the last four strikes to snatch the last qualifying place. 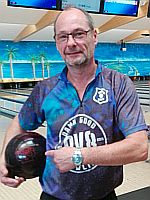 The first final round on Sunday saw the male qualifiers from 19th place downwards bowling a four game block, with only the top 10 staying in the competition. Desimio Giorgio was easily top with 989, with the cut falling at 867 for Jorma Kettunen of Finland.

The next round saw all the remaining players bowl six games with the top eight in each division going through. Johan Åberg (left) of Sweden joined the 300-club in game two, but his other games were not high enough to earn him a place in the next round.

Mo Singleton of England won this round by a mile with 1614, 77 pins ahead of Helmut Ulber (1537). Eighth place was Gregory Blepp of Germany with 1396. In the women’s division, Marett Schiller was clear leader with 1349, while the cut for eight place fell to ISBT all-time title leader Angie Brown of England.

The next round would cut the eight bowlers down to four after a further three games were played. Lol Ellis climbed from sixth to fourth, joining compatriots Mo Singleton and Ron Oldfield and German Helmut Ulber in the final rounds. 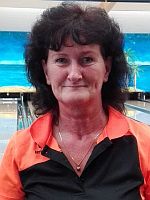 In the ladies’ section, Italian Senior Open winner Beate Albert (right) started Round 2 with a 300 game to put her qualification in no doubt, and it was Liliane Vintens who improved to make the top four, joining Albert, Alessandra Morra of Italy and Marett Schiller.

The final rounds were single-game elimination. All the remaining players played one game with the lowest score eliminated.

First to fall in the men’s section was Lol Ellis, who struggled to find his strike line missing two single pins to finish a distant fourth. In the second game, it was Mo Singleton who lost his way finishing with a lowly 179 game.

Like last year, Alessandra Morra was first to go in the women’s eliminator finals, followed by Beate Albert in the second game who also lost her strike line and was faced with two 7-10 splits.

The final between Liliane Vintens and Marett Schiller looked like it would be close, but splits and an open for Vintens ended her chances. Schiller converted the 5-7 split in frame 6 on the way to a comfortable win, 209 to 174.

The next stop on the 2016 tour is at the French Senior Open at Planet Bowling in Lomme, France. The tournament runs from the Sept. 28 to Oct. 2. Full details are available at the ISBT website. 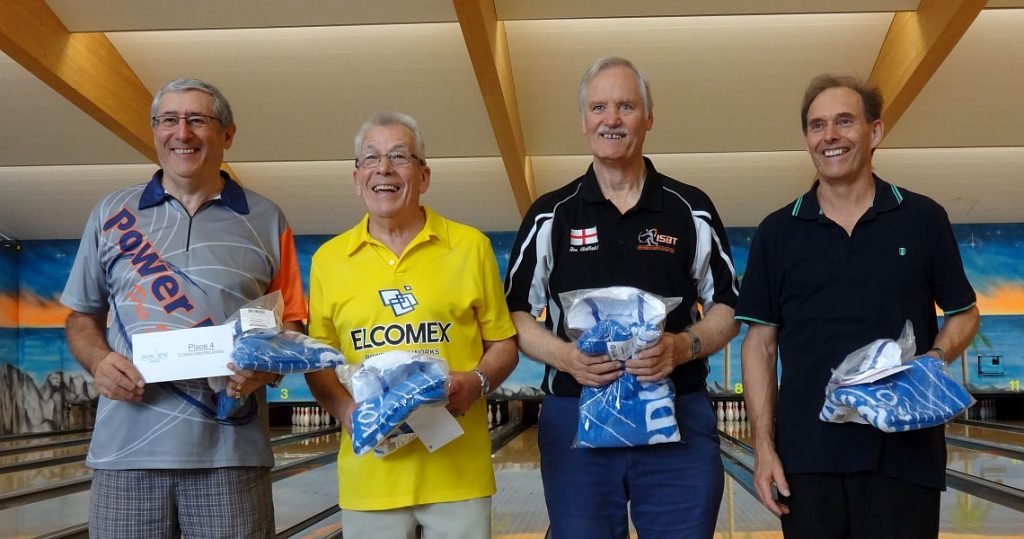 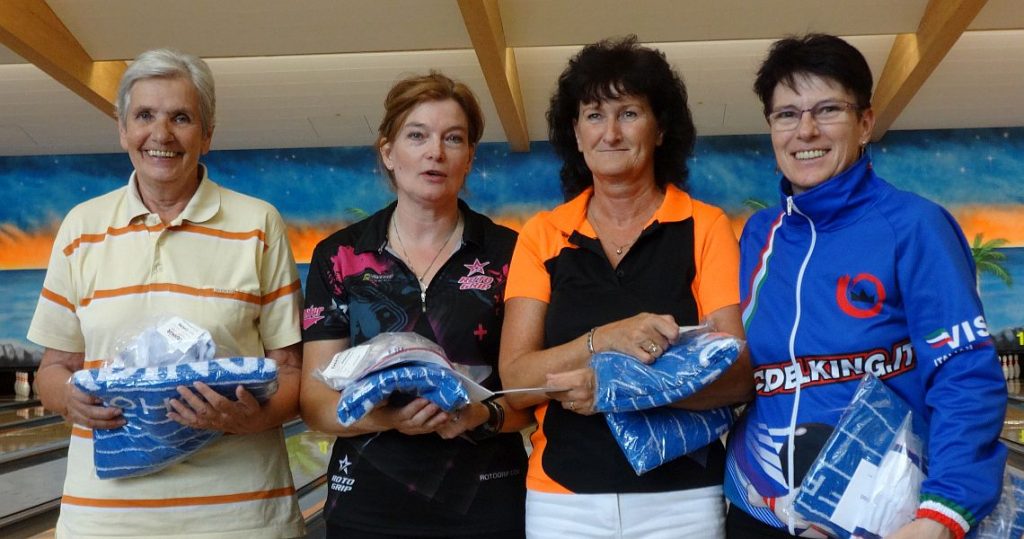 Top 8 qualifiers, top 2 players each of Early Bird (places 9 and 10) and Scratch (places 11 and 12, and one player each of Turbo (13th place) and Desperado Squad (14th place) advance to the first round.