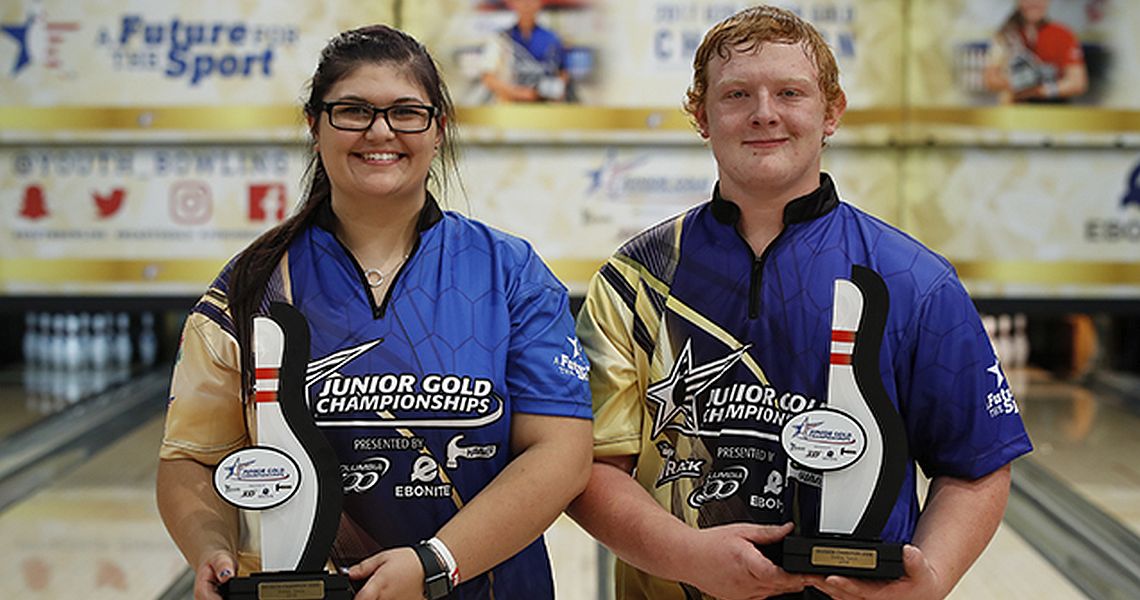 08 August, 2018
Youth
2909
Ads
Anthony Neuer of Lewisburg, Pennsylvania, and Julia Huren of Westland, Michigan, each claimed emotional wins in the 20-and-under division at the 2018 Junior Gold Championships presented by the Brands of Ebonite International.

Neuer, 16, defeated Jacob Mullen of Bellingham, Washington, 267-219, in the boys stepladder final at the International Training and Research Center, while Huren, 20, knocked off Kaitlyn Eder of Lithia, Florida, 237-225, to win the girls championship.

The championship round in each division aired nationally Tuesday on CBS Sports Network.

In the boys final, Neuer provided little doubt about his intent to take home the win as the young left-hander opened the title tilt with nine consecutive strikes before leaving a 6 pin in the final frame to end his run at perfection. Mullen kept pace with strikes in six of the first eight frames, but a 4 pin in the ninth ultimately ended his chances.

Neuer exuded an increased level of focus and determination under the television lights. His experience of appearing in last year’s U15 title match in Cleveland certainly helped, but it was his desire to win for his mother, Angelina, that drove him. She passed away from breast cancer when he was 5 years old, and once the match was secured, the emotion poured out of the young champion.

“She’s what drives me,” Neuer said. “I just told myself I needed to keep it under control until the match is over. Then, once it was over everything else didn’t matter as much. My dad (Andy) and sister (Alexis) have been important in my life. They’re always there. There are times when we look back and we know stuff would be different if she was here. But, we get through it and do stuff for her.”

Last year, Neuer watched as Salama tossed 11 consecutive strikes for an eventual 299 game on the way to a 553-380 victory, but this year it was Neuer who had the chance to be perfect. In all, the experience in a new division and thinking back to last year’s finals all played a role in earning the win.

The 2018 event featured a different look for the televised finals, introducing a three-player stepladder final. In previous years, the top two players in each age-based division would meet in the finals in a two-game total-pinfall match to determine the champion.

“It was fun,” Neuer said. “Throughout the week, I was thinking I wanted to be back there and I wanted another shot. In the championship match, I tried to forget all of that and just bowl my game. Being in a new division was different, but after making Junior Team USA at Team (USA) Trials, I knew I belonged and I was meant to be there.”

Mullen advanced to the title match after providing a mark in the 10th frame to defeat No. 2 seed Bryce Oliver of Cuyahoga Falls, Ohio, 244-214.

The girls championship match featured two current Junior Team USA members, but both players began with opens in the first frame and found themselves tied after two. However, it was Huren who took the advantage after tossing six consecutive strikes from frames three through eight.

Eder, the No. 2 seed, countered with a five-bagger beginning in frame six, which forced Huren to mark in the final frame to win. The right-hander struck on her first shot in the 10th to secure the win.

“I’m definitely feeling excitement,” Huren said. “And, it’s kind of surreal. Until I got to TV, I didn’t think this was actually real. If I had let the moment hinder me and didn’t make a good shot, that would be on my mind for a long time. So, I just took my time, made a good shot off my hand and hoped they fell my way.”

Huren’s road to television saw its fair share of challenges after qualifying in 15th place out of the 16 advancers for match play by the slim margin of four pins. Last year, Huren lost both of her matches for an early match-play exit. This year, Huren persevered to win the title in her final year of eligibility and qualify for 2019 Junior Team USA.

The U20 girls opening match also came down to the 10th frame, where Eder defeated Abby Ragsdale of Aurora, Illinois, 209-206. Needing a double and three pins to advance to the title match, Ragsdale struck on the first shot before leaving an 8 pin on her second offering to finish third.

Six boys and six girls automatically earned spots on Junior Team USA for 2019 through their performances at Junior Gold this week.

Justin O’Shaughnessy of Canton, Michigan, Ryan Burton of Los Altos, California, Chad Stephen of Flint, Michigan, and Cortez Schenck of Phoenix earned spots on the boys team through qualifying, while Neuer and Mullen also made the team by advancing to the championship round.

Schenck is making his fourth appearance, while Neuer joins the team for the second time. Mullen, O’Shaughnessy, Burton and Stephen will represent Junior Team USA for the first time.

Along with Eder, Kamerin Peters of Toms River, New Jersey, Olivia Farwell of Elizabethtown, Pennsylvania, Addison Herzberg of Wichita, Kansas, and Adel Wahner of Las Cruces, New Mexico, also made the girls team through qualifying, while Huren earned her spot by making her way to the title match.

Eder and Huren are making return appearances on Junior Team USA, while Peters, Farwell, Herzberg and Wahner will make their Junior Team USA debuts in 2019.

The U20 division this year featured 1,495 boys and 855 girls, who each rolled 16 qualifying games across four bowling centers, before the top 214 boys and top 123 girls moved on to a five-game advancers round.

The Junior Gold Championships features the top youth bowlers in the country seeking national titles in three divisions – 12-and-under, 15-and-under and 20-and-under – and spots on Junior Team USA. Eight centers in the Dallas area hosted qualifying and match-play rounds, and the 2018 event featured a scholarship fund of more than $350,000 and more than 3,800 entries, both tournament records.

The finals of the U12 and U15 divisions also were taped at the ITRC on July 21 for delayed broadcast. The U12 finals aired July 24, while the U15 stepladder aired July 31 on CBS Sports Network.

The finals of the 2018 USA Bowling National Championships presented by Sixlets also were taped at the ITRC. The U12 finals will air Aug. 14, and the U15 finals will be shown Aug. 21. Both shows also are scheduled to air at 8 p.m. Eastern. All advancers round and match play leading up to the TV shows were broadcast live on BowlTV.