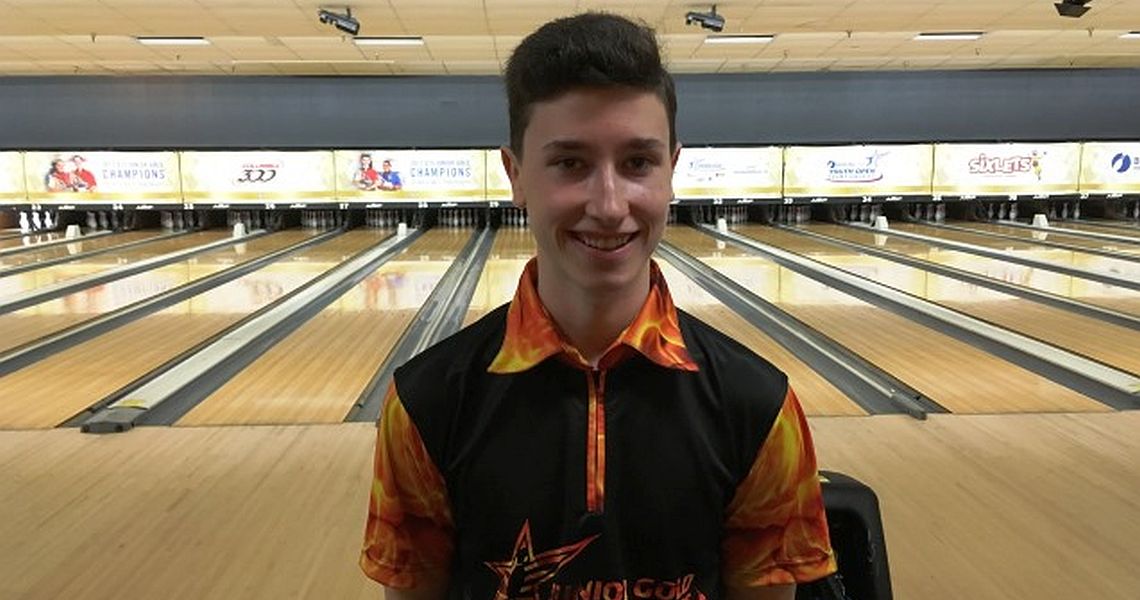 20 July, 2018
Youth
2885
Ads
Sidney Schroschk made the trip from Berlin – his first trip to the United States – to bowl in the 2018 Junior Gold Championships presented by the Brand of Ebonite International.

His father liked to bowl and introduced Sidney to the sport when he was four. He quickly developed a deep passion for bowling and now is one of the top youth players in Germany. He found a Junior Gold qualifying tournament on a military base in Germany, and earned his spot in the U15 boys division.

“I knew that it was a really big event,” Sidney (featured photo) said. “But when you see it in person, when you are on the lanes, it’s so much bigger and exciting.”

A two-hander who bowls from the left side, he had the top set (928) during Wednesday’s qualifying round to jump into fifth place, though was expected to fall back some after a 662 set on Thursday during one of the day’s opening squads.

“Yesterday, I had a pretty good day,” Sidney said. “Today, I actually thought it would be the easiest center for me but I just had problems with my hand, pushed the ball too much to the inside. But I made the cut.”

He said he’s made many friends through Junior Gold and he wants to return to the United States to bowl in college.

The city of Dallas and the Dallas Sports Commission are hosts for this year’s Junior Gold Championships, which features more than 3,800 of the top youth bowlers competing for national titles, part of a tournament record $350,000 scholarship fund and spots on Junior Team USA.

Siblings among the leaders 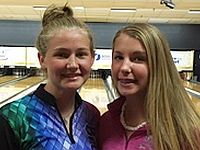 Sisters Kamerin and Paige Peters (l-r) of Tom Rivers, New Jersey, are only 11 months apart in age, but it was enough to land them in separate divisions at this year’s Junior Gold Championships. That just might be a good thing.

“We don’t even like to practice together because we get so … I don’t know if it’s frustrated at each other or just the competition,” said Kamerin, who had an 803 series during Monday’s opening round in U20 girls. “I want to win, she wants to win.”

Both were in the top four of their respective divisions, heading into the final round of qualifying. Kamerin bowled on one of the first U20 squads on Thursday, while Paige was on one of the three U15 evening squads.

Paige said when they compete in singles events they help one other, yet always remain competitive. But she does look up to her older sister, right?

“Depends on the day,” Paige said. “When she shot her 800, I told other people I was proud of her. My dad was really happy I was supporting her. So, I made the parents happy, too.”

The separate divisions, however, won’t happen at the 2019 Junior Gold Championships. For one year, they both will compete in the new 17-and-under division.

Young competitor gets best of both worlds in Dallas 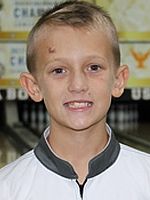 Eight-year-old Donaven Kline of Jackson, New Jersey, might be one of the youngest competitors in the field this week, but he performed like a seasoned veteran Thursday morning at USA Bowl, tossing games of 206, 157, 255 and 179 for a 797 total.

The Junior Gold Championships presents some of the most challenging lane conditions, which made young Donaven’s career-day that much more exciting.

“Today was really fun,” said Donaven, who is bowling in his second Junior Gold Championships. “Everyone congratulated me. It was really exciting because the patterns are really hard. It’s a fun tournament. There’s a lot of people and it’s really competitive. It’s just fun in general.”

Donaven also competed in the USA Bowling National Championships with the U15 Northeast regional winners, I Don’t Know. As the youngest competitor on the team, Donaven enjoys the competition, especially getting to compete alongside his brother, Andrew.

“It’s been really good because I’m in U15 and I’m only eight,” said Donaven, with a smile. “It just feels really good to be on a team with my brother and all of my friends.” 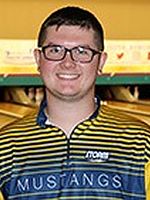 With the final day of qualifying underway at the 2018 Junior Gold Championships, many players will be hitting the refresh button on the tournament standings to see how the cut number for their age-based division is looking in hopes their score is enough to advance.

One bowler who wasn’t concerned with looking at the leaderboard through the first three days was Dylan Catalano-Wild, 20, of Channahon, Illinois, though he entered Thursday’s final round as one of three players at the cut number in the U20 boys division.

Catalano-Wild, who will be starting his junior year at Mount Mercy University in the fall, had toppled 2,318 pins in his first 12 games and was tied for 214th place. In 2018, the U20 boys started with 1,495 bowlers, and the field will be cut to the top 214 players, including ties, for Friday’s advancers round.

“I definitely don’t look at the standings,” said Catalano-Wild, who is making his fourth and final appearance at Junior Gold. “It will get in my head, and I didn’t want that. I just want to focus on consistently making good shots and make my spares.”

Competing Thursday at Forum Lanes in Grand Prairie, Catalano-Wild needed to rely on that focus, along with a little bit of help from his coach, after starting with a pair of 172 games. He bounced back to finish with games of 275 and 227, which included the final six strikes, to finish the day with an 846 series and 3,164 qualifying total.

“The first game, I wasn’t carrying and leaving a lot of corner pins, so I switched to something stronger and still was leaving 7s and 10s,” Catalano-Wild said. “I talked with my coach before the start of the third game, and he suggested I move one board to the right. I started to carry, and it worked out pretty well.”

Catalano-Wild now gets to play the waiting game to see if his score is enough to advance, which would mean a lot in his final year of being age-eligible for the tournament.

“It would be amazing,” Catalano-Wild said. “It would show that all of the hard work – the hours of practicing spares and putting work into my game – has finally paid off.”

As the 2018 Junior Gold Championships transitions to match play, friends, family and bowling fans will be able to follow the action live on BowlTV.

Four livestreams will be going at four different centers starting at 8:30 a.m. Eastern to capture the action as the field gets narrowed down.

Once the U20 boys and girls advance to match play, all rounds will be contested at USA Bowl.

To find all of the livestream links, click here. 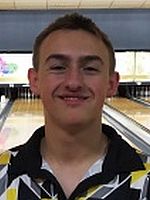 The Junior Gold Championships U12 winner in 2015, Spencer Robarge of Springfield, Missouri, was the top qualifier in the U15 division last year. This time around, only a handful of pins separate the top three in the division – Robarge, U15 two-time defending champion Solomon Salama of Beverly Hills, California, and Cincinnati’s Nolan Blessing, who tied for seventh last year and was third in 2015.

Robarge rolled an 803 set in his final qualifying round at Sparetime Lanes on Thursday.
“I’m ecstatic,” Robarge said of his final round. “They (the lanes) were impossible. The last game, I did what I could and shot 184. That’s what you have to do out here – you have to grind.”

He’s also part of the 3 Lefts Make A Right team that seeks to defend its USA Bowling National Championships U15 title. Following his morning squad at Junior Gold, he headed over to USA Bowl for match play in the USA Bowling event and his team made the title match.

“It doesn’t really bother me,” Robarge said of the busy schedule. “If I’m out practicing, I’ll shoot 20, 30 games a day. And the other one is Baker (format), so I’m throwing three shots a game. But it’s Junior Gold week, it’s always the busiest week of the year.”

Click here for results and more information on the Junior Gold Championships.