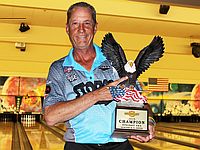 Xtra Frame fans will have a full June schedule of viewing options, filled with live PBA Tour, PBA50 Tour and PWBA coverage, but none of the events are likely to have the historical significance of the Suncoast PBA Senior U.S. Open that takes place May 30-June 3 at the Suncoast in Las Vegas.

Fans following the PBA50 Tour’s first major championship of the year will be watching to see if PBA Hall of Famer Pete Weber (pictured left after winning the 2015 Senior U.S. Open) can make more history as he continues his quest for a record fourth consecutive PBA50 Tour title, back-to-back Senior U.S. Open titles and what may prove to be an insurmountable lead in his bid for back-to-back PBA50 Player of the Year honors.

Fans can relive Weber’s strike-to-win shot at the 2015 Senior U.S. Open by watching this clip on PBA’s YouTube channel where Weber also addresses the question, can he repeat?

As the PBA Senior U.S. Open wraps up, the PBA Tour returns to action with the Downums Waste Services PBA Jonesboro Open presented by Xtra Frame at Jonesboro Bowling Center in Jonesboro, Ark., June 4-5, and PWBA fans will be able to watch live coverage of the preliminary rounds of the PWBA Wichita Open from Northrock Lanes in Wichita, Kan., also over the June 3-5 weekend.

Additional PBA50 Tour action on the June Xtra Frame schedule include the Fountain Valley Open presented by Track, June 6-8, and the Northern California Classic presented by MOTIV, June 13-15 The USBC Senior Masters, June 19-25, will be covered by BowlTV on bowl.com.

All preliminary rounds of PWBA events leading up to the CBS Sports Network-televised stepladder finals air live on Xtra Frame.

Heavy rains and flooding that have impacted areas of Jonesboro, Ark., have not impacted Jonesboro Bowling Center. In fact, heeding the old adage about no need to fix the roof if it ain’t raining, the soon-to-be host of the Downums Waste Services PBA Jonesboro Open presented by Xtra Frame is one step ahead – making major roof repairs ahead of potential problems.

So the center is sitting high-and-dry, awaiting its PBA Tour Xtra Frame event, which will take place June 3-5.

Entries for PBA’s World Series of Bowling VIII, set for Nov. 27-Dec. 11 at the National Bowling Stadium in Reno, don’t open until July 15, but the PBA has already learned a contingent of bowlers from Malaysia are making plans to compete.

No details are available at this point, but Malaysia hasn’t had a representative in the WSOB since the inaugural event in 2009. 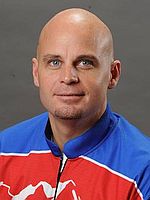 After decisively winning his first two matches in the eight-game round-robin finals, Scroggins lost his next four matches before rebounding with a 269 win in game seven. Meanwhile, Findling won six of his first seven matches to close in on the lead while Cooper won five of seven matches to take a six-pin lead over Scroggins and a 21-pin advantage over Findling going into the final position round match.

The title was undecided going into the 10th frame where Scroggins finished first, leaving a 7-10 split. Findling then left a solid 10 pin to allow Cooper a chance. Cooper seized the moment, throwing two strikes to collect the $2,500 first place check and become eligible to enter the 2017 PBA Tournament of Champions.

The tournament also was the debut event in PBA competition for Denver Broncos running back C.J. Anderson, an amateur who aspires to become an accomplished bowler.

In his PBA debut, Anderson finished in a tie for 64th in the field of 71 bowlers, averaging a modest 173 for his eight qualifying games, but he also announced his intention to bowl in the upcoming Downums Waste Services PBA Jonesboro Open presented by Xtra Frame at Jonesboro Bowling Center in Jonesboro, Ark., June 3-5.

Coincidentally, one of Anderson’s coaches is Brett Cooper. 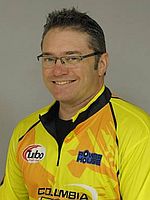 Wodka, who finished with a 10-2 match play record and a total of 4,823 pins for 20 games, including match play bonus pins, picked up his 21st career PBA Regional title and the $2,500 first prize. 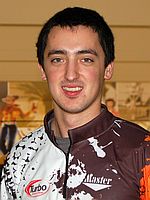 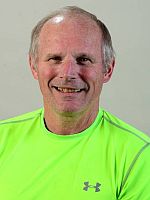 Over Memorial Day weekend, QubicaAMF PBA Regional competition will include the Junction City Bowl Southwest/Midwest Open presented by MOTIV in Junction City, Kan. (which was originally scheduled for May 13-15); and the Colony Park Lanes East Challenge for non-title winners in York, Pa.