02 October, 2018
Senior Tour
3034
Ads
Frederique de Bandt of France and Belgium’s Roger Pieters clinched the women’s and men’s titles in the French Senior Open at Planet Bowling in Lomme, France, Sunday. It was the first title on the International Seniors Bowling Tour for De Bandt while Pieters became the first multiple men’s champion this season.

The tenth stop on the 2018 ISBT tour was a return to France, this time to Planet Bowling in Lomme. There is usually a strong entry for this tournament, but with a late announcement of the date, and a clash with several other tournaments, including the German selection event for next year’s World Senior Championships, the entry was only 61 men and 27 ladies. The tournament was played on the Beaten Path pattern from the Kegel Challenge series.

The format for the tournament was a single six-game qualifying block, with unlimited re-entries. For those not able to qualify through the main leaderboard, there were additional opportunities through Scratch score, Turbo games and a Desperado squad.

Squads started on Wednesday, and due to the low entries, only one squad took place on Wednesday and Thursday, instead of the scheduled two. Over the first two days, Steven Jeeves from England lead with 1293 including age bonus, ahead of Yvon Lassal from France with 1274 including age bonus, with Farida Pascoal-Blom from the Netherlands scoring 1160 in the ladies’ section.

There were three squads on Friday, and Frank Stander from England shot into the lead with a fine 1370 block. That was to be the only series bowled over 1300 in the entire tournament, with Claude Escargot from France getting second best on the day with 1267.

In the ladies’ section, Cathy Roux and Frederique de Bandt, both from France, just crept over the 1200 mark. It was now becoming clear that the lane pattern was playing much tougher than expected, with bowlers failing to locate anywhere to play along the ‘Beaten Path’.

There were three final squads on Saturday, the first going to Pierre Luc Sanchez from France with 1280, and Angie Brown from England with 1168. In the second squad of the day, Frank Stander was again top, but with a lower score of 1294, while Jacqueline Faure from France had a great score of 1267 to take the lead in the overall standings. The final squad saw Alan Deledda from France almost reach the 1300 line, with a score of 1295, while Inge Hazeleger from the Netherlands secured her place in the finals with 1184.

At the close of qualification, it was clear how tough the condition was. The highest scratch score in the entire qualifying competition was 268, with almost half of the series bowled not including a single 200 game. This low scoring pace was reflected in the entry for the Desperado squad, where only 3 men and 3 women felt it was worth continuing to bowl. Patrick Mouchan from France and Mike Halliwell from England were the two successful Desperado qualifiers, joined by defending women’s champion Lynne Walker from Wales, who bowled a fine 222 scratch game.

At the end of qualification, Frank Stander was top with 1370, some distance ahead of Alan Deledda, Steven Jeeves and Les Grant from England. These four would miss the first two finals rounds.

The next four men would miss just one final round, last in this block was Mo Singleton from England with 1261. The cut for the top 24 was Jean-Marc Lebon from Belgium with 1194, making it one of the lowest ever first round cuts in an ISBT competition. These 24 would be joined by three Scratch, three Turbo and the two Desperado qualifiers.

In the ladies’ section, the top four were all French. Jacqueline Faure was top with 1267, and would gain a bye directly into the final, together with Cathy Roux, Frederique de Bandt and Brigitte Fievet. Positions five to eight would progress to the first final round, eighth place going to Farida Pascoal-Blom. Joining them would be two Turbo, one Scratch, and one Desperado qualifiers.

One male and one female bowler who had made the cut had notified the tournament organizers that they would not be returning for finals day, so the men’s and ladies’ cuts were modified to 25th and 9th place.

It was then realized that the computerized results had not calculated the Turbo and Scratch qualification as specified in the ETBF sanction. The tournament referees took charge of resolving the issue, and an extra male bowler was added to the first final round, ensuring no-one had been disadvantaged by the confusion.

The men in positions 9 to 24, plus the other qualifiers, had an early start on Sunday morning in the quarter-final round of four games. Patrick Rolland from France was leader of this round with 897, with Jean Charles Faure from France just making the next round cut in 12th place with 787. 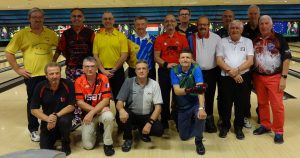 In the semi-final round, the 12 men qualifiers from the previous round were joined by qualifiers 5 to 8 (pictured left). 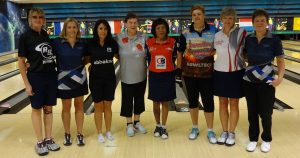 The woman from qualifying positions 5 to 8, plus the other female qualifiers (right), also bowled their first final round. This was bowled without a redress from the previous men’s round, creating a condition not seen at all in the qualifying rounds.

In the men’s section, Roger Pieters from Belgium won with 910, ahead of Patrick Rolland. The cut for eighth and a place in the final went to Yvon Lassal with 810, with Ron Oldfield from England missing out by two pins after missing a single pin spare with his last ball.

In the ladies’ division, Angie Brown was clear leader with 791, with four bowlers battling it out for the next three places. A double at the end of the last game ensured Inge Hazeleger grabbed the important fourth place from Marianne Pelz from Germany. 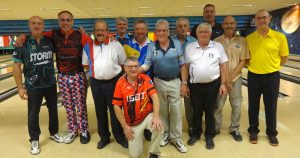 In the men’s final (left), Roger Pieters started strongly with scratch games of 258, 204 and 236 gave him a comfortable lead of over 60 pins with a game to play. A lowly 168 last game was easily enough to retain his lead and secure his second ISBT title of the year. Second place went to Jean-Marc Lebon, with Alain Deledda in third position. 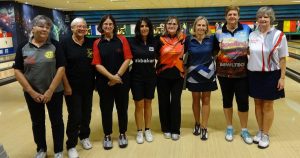 The ladies’ final (right) saw Kimberley Oakley from England open up with a 230 game to establish a strong lead. However, the next two games were not kind, and she slipped to fifth place, with Cathy Roux taking the lead, but with less than 30 pins separating the top six.

In the final game, an improved score from Kimberley Oakley saw her finish in second place, behind Frederique de Bandt, who took her first ISBT title. Brigitte Fievet climbed to third place to gain another podium place.

The 11th stop on the 2018 International Seniors Bowling Tour is the Flanders Senior Open, which will be held from November 8-11 at Euro Bowling in Deurne, Antwerp, Belgium. Full details are available at the ISBT website. 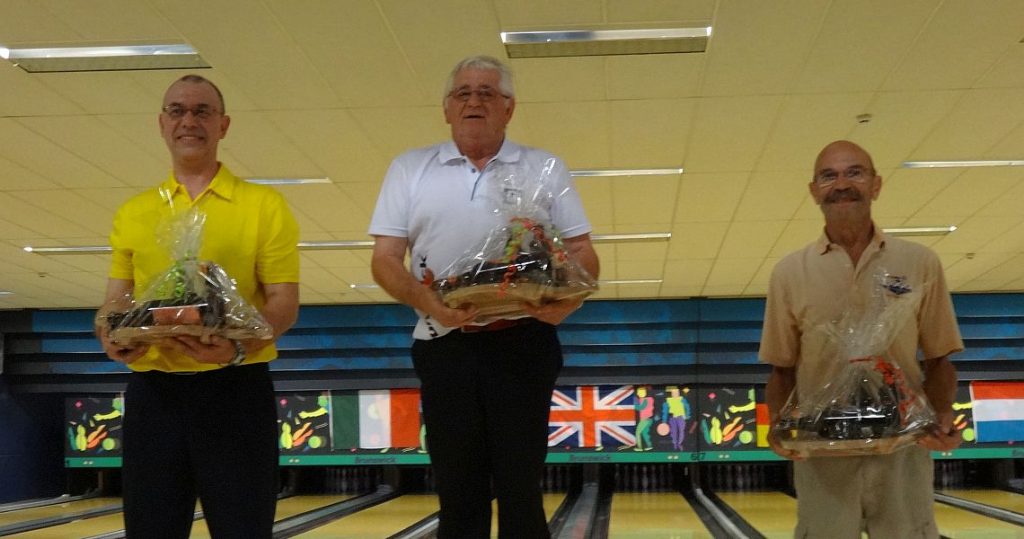 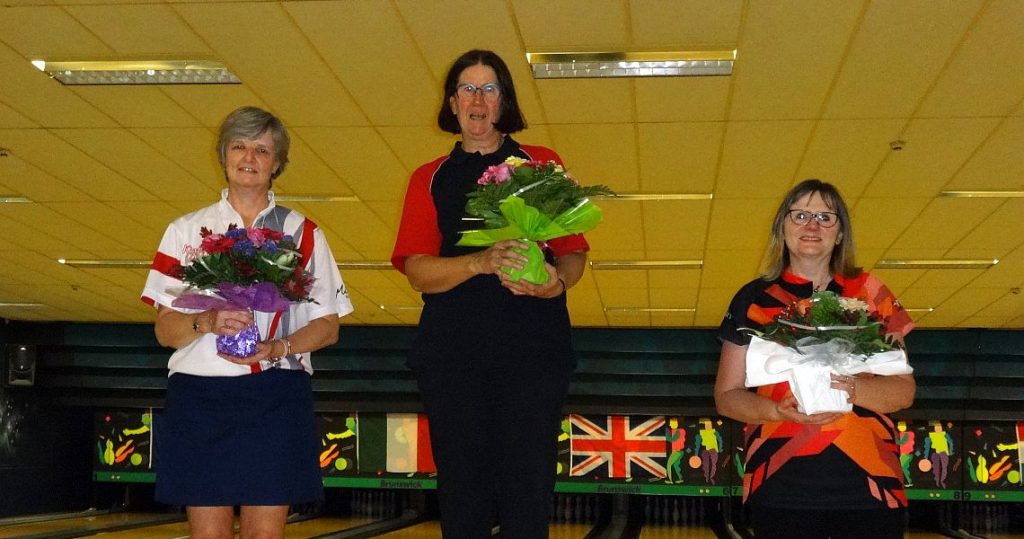 Top 8 advance to the finals.

Top 4 advance to the finals.