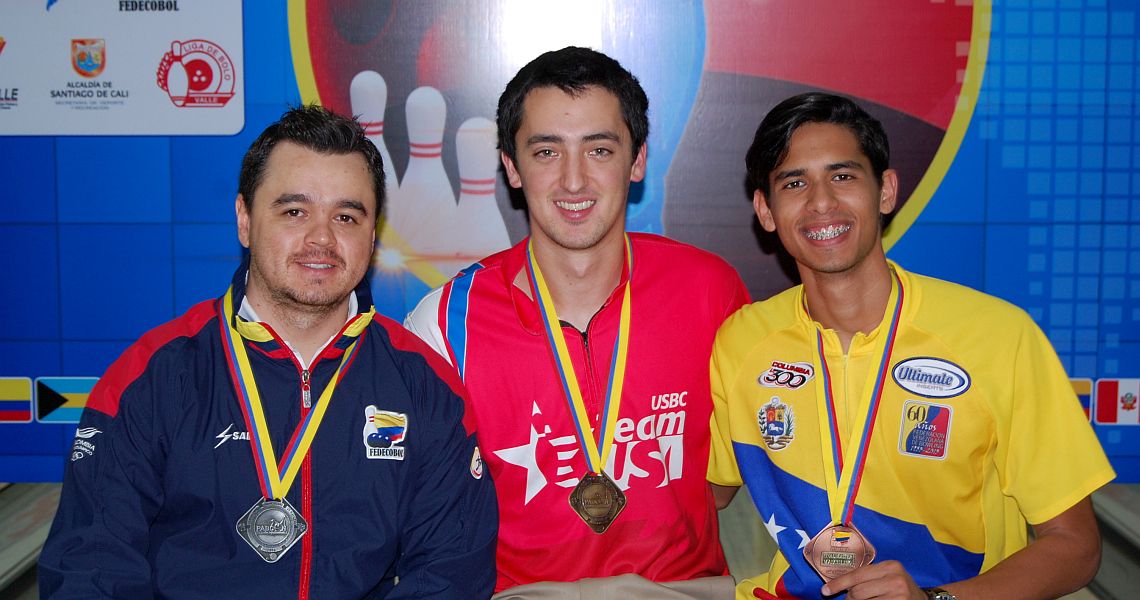 18 September, 2016
Championships
2781
Ads
Team USA’s Marshall Kent started the week with a singles score that could’ve been enough for a gold medal most years at the Pan American Bowling Confederation Adult Championships, but he ended up just shy of the medal stand at the 2016 edition.

Instead of returning to the lanes at Bolera Departamental in Cali, Colombia, disappointed, Kent knew he bowled well and carried the momentum of a great start to two gold medals and two silver medals, including a Masters win Saturday to wrap up the tournament for the men.

Kent, a 23-year-old right-hander, rolled through the 16-player Masters bracket without a loss in four best-of-three single-elimination matches and delivered three strikes in his final frame to defeat hometown favorite, Santiago Mejia of Colombia, 2-0, in the final.

The first game of the championships match was a grind, with Kent winning 195-158. In the second game, Mejia managed to strike 10 times, but splits in the third and ninth frames proved to be his undoing as Kent stepped up and shut him out in a 246-241 victory.

“Obviously, the main goal was to win team, but it was a phenomenal week overall, and I don’t think it could have gone much better,” said Kent, who helped Team USA to a gold medal in team and added silver medals this week in doubles and trios. “We came together as a team and had a great time. It was exciting and memorable. This is what you live for as a competitor.”

The week was a satisfying debut for Team USA coach Bryan O’Keefe, who led the adult men’s team for the first time in his coaching career.

“This is my first time coaching the adult men and my first time on the road with them, so there was some anxiety about how it would go and how they would respond to the new situation and me being there,” O’Keefe said. “To come down here and take all but two gold medals was incredible, and it was a great start to the two-week process.”

The men’s portion of the 2016 PABCON Adult Championships included more than a dozen countries, with more on the line than just gold medals. The top eight teams this week qualified for the combined 2017 World Championships in Kuwait.

This was determined by a combined total pinfall from the following categories in each division – top four singles scores, top two doubles scores, top trios set and pinfall in team competition. The qualifying teams were the United States, Canada, Colombia, Venezuela, Mexico, Puerto Rico, Costa Rica and the Dominican Republic.

The women will have the same opportunity when they take the lanes at Bolera Departamental, beginning Monday.

Additionally, the top two countries across the two-week stretch in Colombia will qualify for the World Games, which is held every fourth year and next will be contested in Wroclaw, Poland, in July 2017. This will be a combined pinfall total for the top two men and top two women for each country during the 24 games at the PABCON event.