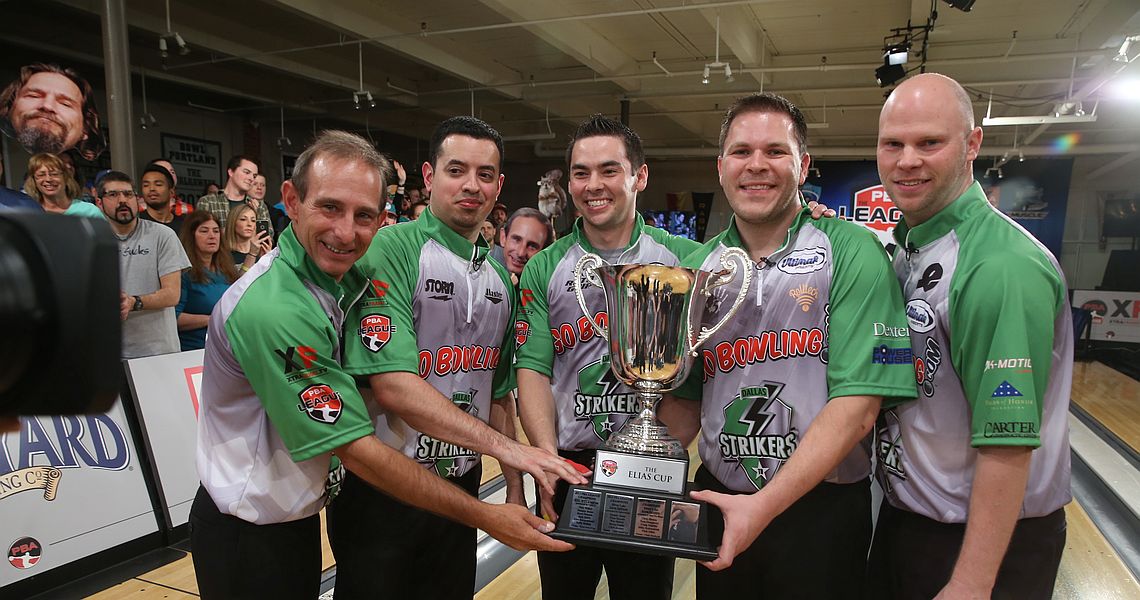 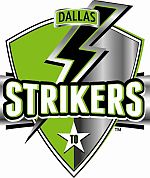 It had never been done before in PBA competition, so when the PBA League GoBowling.com Dallas Strikers, led by player-manager Norm Duke, bowled a Baker format 300 game in the semifinal round of the PBA League Elias Cup competition at Bayside Bowl in Portland, Maine, the question arose, does the team qualify for the traditional $10,000 bonus for a nationally-televised 300 game?

The question was answered in front of a crowd of more than 1,000 bowling proprietors and industry leaders during International Bowl Expo at Mandalay Bay in Las Vegas Tuesday when PBA CEO and Commissioner Tom Clark surprised Duke with a check for $10,000 to share with his Elias Cup-champion teammates BJ Moore, Shawn Maldonado, Bill O’Neill and Tommy Jones.

The Baker 300 game, which aired on ESPN on May 1 as part the Elias Cup series, helped the Strikers eliminate the Barbasol Motown Muscle and advance to the championship round against Pete Weber and his GEICO New York City WTT KingPins teammates. Duke called the experience of anchoring the perfect game “one of the five top moments in my career.”

“It was a surprise because at the time it happened, the PBA League was not a traditional PBA Tour event and there wasn’t a 300 game bonus plan in place,” Clark said.

“But we discussed the situation after the fact and decided the reward was in order, and center stage at International Bowl Expo provided us a perfect opportunity to not only present the $10,000 bonus, but to show the industry leaders a clip of the 10th frame of the historic game.” 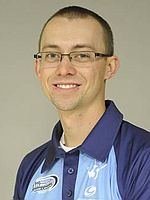 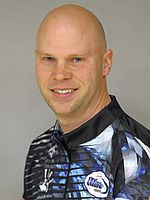 Despite finishing outside the top 20 and earning no points in the PBA Xtra Frame Lubbock Sports Open, EJ Tackett retained the lead in the winner-take-all race for the $10,000 XF PBA Tour series bonus while Tommy Jones (right), who earned two points for his 19th place finish in Lubbock, held on to second place.

Moving into contention after the fourth of 10 XF PBA Tour events was Sean Rash, who earned 13 points for finishing eighth; Lubbock runner-up Shawn Maldonado, who collected 19 points, and Lubbock winner Jakob Butturff, who picked up his first 25 points in the series.

Heading into the PBA-PWBA Striking Against Breast Cancer Mixed Doubles event at Bowl on Bellaire in Houston July 29-31, the top 20 in the XF PBA Tour points race are:

In each of the series events, the winner earns 25 points. Second place earns 19 points, third place 18, etc., descending by one point per place through 20th place.

Next up on Xtra Frame: PWBA Lexington Open, Teen Masters

Heading into the Fourth of July holiday weekend, Xtra Frame’s live coverage will focus on the PWBA Lexington Open Friday and Saturday from Collins Bowling Center-East in Lexington, Ky., followed by extensive coverage of the Teen Masters boys and girls championships from Sawgrass Lanes in Tamarac, Fla., July 4-8.

Xtra Frame also will be on the scene for the PWBA Rochester Open at AMF Gates Lanes in Rochester, N.Y., Friday and Saturday, July 8-9. 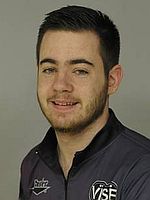 Rising PBA star Anthony Simonsen (left), a 19-year-old two-handed player from Princeton, Texas, will be one of the eight bowlers who will represent the United States in the 2016 World Bowling Youth Championships July 26-Aug. 2 in Lincoln, Neb. Simonsen will bowl with Kamron Doyle of Brentwood, Tenn.; Wesley Low of Palmdale, Calif., and Michael Tang of San Francisco on the boys’ team.

Simonsen won the United States Bowling Congress Masters earlier this year. Doyle and Low were on the team that won a third straight title for Junior Team USA at the 2014 World Youth Championships in Hong Kong where Low also won boys all-events. 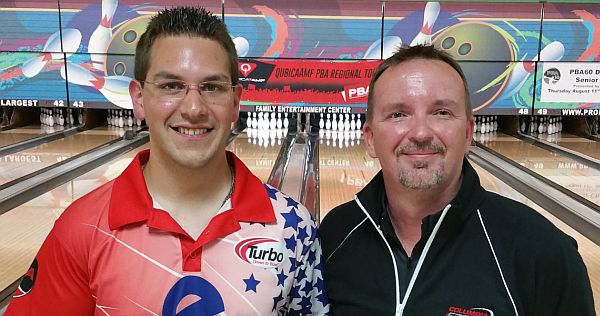 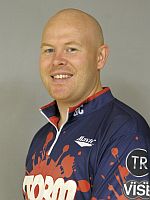 Chris Colella (pictured above with GM Brian Cave, right ) of Templeton, Mass. defeated Jean Perez of Puerto Rico, 252-202, to win the PBA Pro Bowl West Central/Midwest Challenge presented by Columbia 300 at Pro Bowl West in Ft. Wayne, Ind., on Saturday. Challenge events are open to players without a PBA title or non-members who have never won a PBA event.

Along with his first PBA title, Colella earned $1,500 and became eligible to enter the 2017 PBA Tournament of Champions. Colella downed Matt Staninger of Indianapolis, 2-0, and Perez topped Joe Hostetler of Louisville, Ohio, 2-1, in the best-of-three-game semifinal round to set up the championship match.

On the QubicaAMF PBA Regional schedule for the July 15-17 weekend are the PBA Boss Snow Plows Central Open at PinHeads Bowling Center in Fishers, Ind.; the PBA/PBA50 Sands Regency West/Northwest Doubles presented by MOTIV at the National Bowling Stadium in Reno, and the PBA Glo Bowl Midwest Open in Marengo, Ill.

Closing the July schedule will be the PBA/PWBA Striking Against Breast Cancer Mixed Doubles, presented by Xtra Frame, at Bowl on Bellaire (formerly Palace Lanes) in Houston, Texas. The tournament affectionately called the “Luci” in honor of the late Luci Bonneau, who died of breast cancer, begins on Friday, July 28, and concludes on Sunday, July 31. All rounds will be covered live on PBA’s online bowling channel, Xtra Frame, and both PBA and PWBA Tour titles will be awarded if the respective players are members.

Hammer Shoes are now part of the PBA Product Registered program, which makes them eligible for use by players in PBA competition.