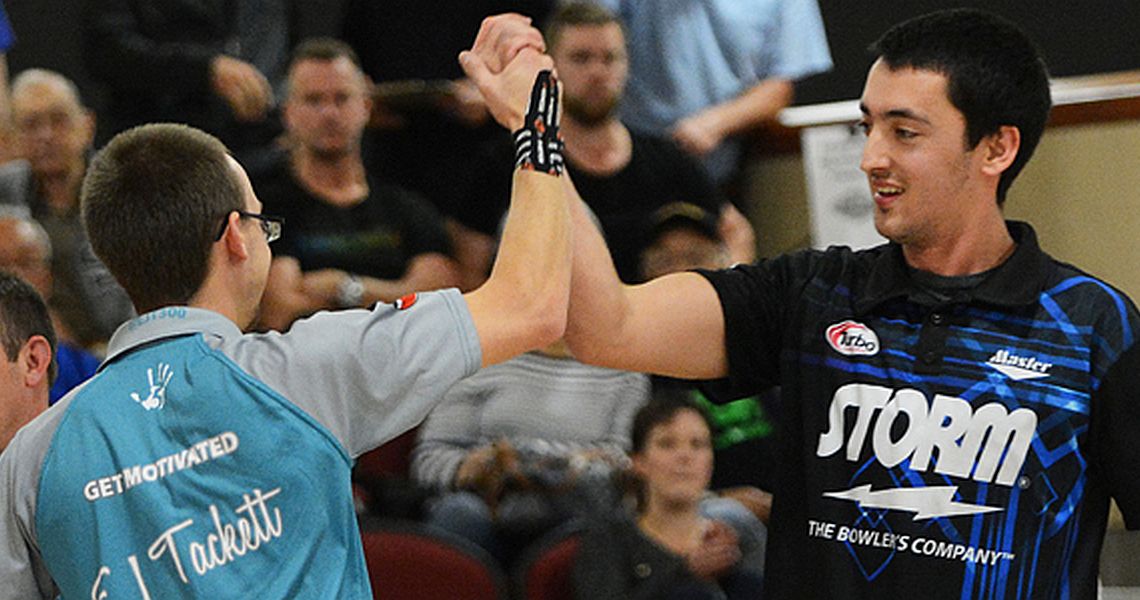 12 April, 2017
PBA National Tour
2393
Ads
EJ Tackett of Huntington, Ind., and Marshall Kent of Yakima, Wash., Professional Bowlers Association Rookies of the Year for 2013 and 2014, respectively, were “relaxed and having fun” Tuesday as they ransacked the field in the MaineQuarterly.com Mark Roth/Marshall Holman PBA Doubles Championship at Bayside Bowl in Portland, Maine.

The 24-year-old doubles partners, who characterized themselves as “polar opposites” as far as bowling styles are concerned, averaged a combined 232 for 12 doubles (24 individual) games to lead the field of eight teams that advanced to Wednesday’s final qualifying rounds.

Their 5,586 pinfall total gave them a 32-pin lead over a pair of two-handed players, Sweden’s Jesper Svensson and Kyle Troup of Taylorsville, N.C. First-round leaders Bill O’Neill of Langhorne, Pa., and Jason Belmonte of Australia were in third place and defending champions Connor Pickford of Plano, Texas, and Anthony Simonsen of Austin, Texas, advanced in fifth place.

Tackett, PBA’s 2016 Player of the Year, and Kent reunited after bowling together on the ‘Merica Rooster Illusion team that won the PBA Team Challenge in Las Vegas last fall, where they found the magical blend they both were looking for.

“I was looking for a personality I could match up with,” said Kent (left), who led the duo by 120 pins with his six-game, 2,863 pinfall total that included a 300 game. “It’s easy to find good players to bowl with, but I wanted to bowl with someone I could relax with…” and “…we absolutely do that,” said Tackett, finishing Kent’s thought.

“Marshall’s ball roll is a lot different than mine. He sees the lane a lot differently than I do,” Tackett added. “He’s hooking the ball; I was throwing a urethane ball and trying to play straighter. The way we bowl, we’re polar opposites.

“The team we won with last fall was strategically put together with guys who all have fun,” Tackett (right) continued. Other members of their team were Ronnie Russell, Rhino Page and Chris Loschetter. “It’s so important in this kind of environment.

“We were ragging on each other all day,” Kent chimed in. “There was a lot of banter.” “A lot,” Tackett laughed.

“That’s why we could save ourselves from bad games,” Kent said. “We didn’t let anything get us down. We always pulled it back together the next game.”

Wednesday’s competition will include two eight-game rounds of Baker format (alternate frame) match play at 10 a.m. and 3 p.m. Based on combined standard and Baker pinfall totals, the top four teams will advance to the live ESPN stepladder finals on Sunday at 1 p.m. ET. The finals also will be simultaneously streamed live on ESPN3 and the WatchESPN app.