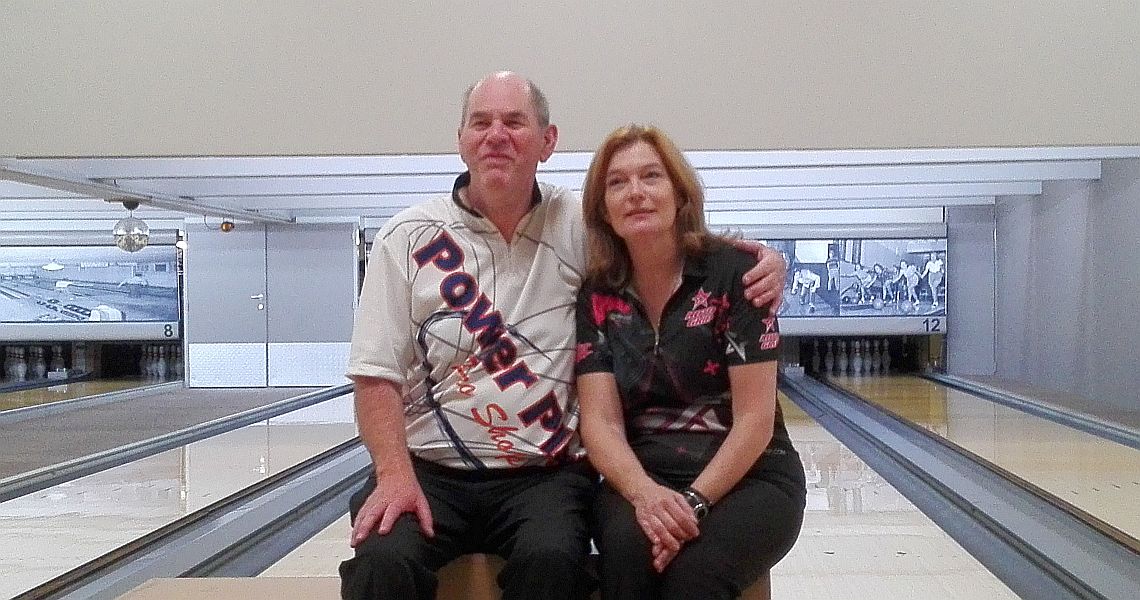 15 November, 2016
Senior Tour
2815
Ads
Liliane Vintens of Belgium and Keith Hodge of England posted some big scores to survive the eliminator finals of the Flanders Senior Open Sunday at Euro Bowling Deurne in Antwerp, Belgium, on the way to win their first title this season on the International Seniors Bowling Tour.

The ninth and penultimate stop on the 2016 Tour was a return to the popular venue of Euro Bowling, which attracted an entry of 71 men and 14 women. The format for the tournament was unique for ISBT events, with qualification being through the best three-sets-of-three-games, with unlimited re-entries available.

For those not able to qualify through the main leader board, there were additional opportunities through turbo games, scratch scores and two daily winners from the Wednesday and Thursday squads.

The first squads on Wednesday were led by John De Vries of the Netherlands with 2101 including age bonus over his nine games. The top male and female bowlers of the day who didn’t otherwise qualify would make the finals, top female bowler was Liliane Vintens with 1767.

Thursday’s squads were won by Ron Van den Bogaard of the Netherlands with a much lower total of 1958, however the ladies top player was Angie Brown of England with an excellent 1974, both securing their places in the finals.

There was more good scoring through the Friday squads, including an 835 three-game block from Dave Montgomery of England. Hermann Wimmer of Germany moved into a strong position on the overall rankings with a total of 2154, with Kimberly Oakley of Scotland posting a strong block of 1833. 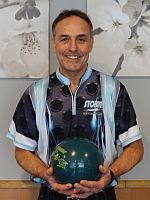 There were six more qualification squads on Saturday. In the second squad, a trio of English bowlers took top honors, Ian Buckland and Keith Hodge both were over 750 for their three games, but the star of the squad was Mike ‘Frosty’ Halliwell (pictured right) with a perfect 300 game.

Over the final squads of the day, the top scores stayed high, with 805 for Ron Oldfield of England, and 810 for Roger Pieters of Belgium.

At the end of qualification, Pieters was top qualifier with 2249, just ahead of Oldfield, Hodge, and Buckland, these four would miss the first final round on Sunday.

The cut for the final in 22nd place was Laya Djouad of France with 2056. The 22 top qualifiers would be joined in the finals by the top two from the scratch list, two turbo qualifiers, and two daily winners.

In the ladies section, Vintens qualified first with 1988, just ahead of Brown, Marianne Pelz of Germany and Paula Visser of the Netherlands. These four, together with one turbo, one scratch, and two daily winners would make up the eight in the finals.

The first final round was only for the men, and was a four game block. Giorgio Desimio of Italy was comfortably top with 1005, ahead of Harald Punessen of Germany. The top twelve would remain in the competition, twelfth place was Gery Verbruggen of Belgium with 879.

The next round saw both the men and women bowl a four-game block to see who would enter the later stages. Djouad had a massive block of 1096 including 289 and 279 games to take the win, last place qualifier was defending champion Oldfield who made the cut by the smallest of margins.

In the women’s section, Vintens also had a big block with 1015 to win, with Farida Pascoal Blom of the Netherlands taking the final sixth place with 788.

Both sections now went into an elimination format. The nine remaining men were seeded into three groups, and each bowled two games, the lowest in each group being eliminated. Desimio, Helmut Ulber of Germany, and Oldfield were all eliminated in this round.

The remaining six men were seeded into three pairings, the unlucky losers at this stage were Djouad, Buckland and Wimmer. 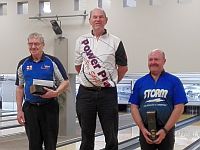 That left only Alan Jenkins of England, Verbruggen and Keith Hodge to contest the final round over two games. Both Hodge and Jenkins got off good starts in the first game, but Jenkins faded slightly in the second game, leaving Hodge (center) the overall winner, with Jenkins (left) in second place, ahead of Verbruggen (right).

The ladies elimination stages followed a similar format to the men’s, with two groups of three playing first. At this stage, Brown and Visser were eliminated. In the next round, Pelz had a comfortable win over Oakley, and Vintens easily defeated Pascoal Blom.

The final saw Vintens open up a lead after the first game, which was clawed back by Pelz in the second, but she was unable to totally catch up, so Vintens took the victory for her eighth ISBT title and her first since 2014. (l-r Pelz, Vintens, Oakley and Pascoal Blom.

With just one more round of the 2016 ISBT season to go, Hermann Wimmer, a two-time winner this season, has extended his position at the top of the season’s rankings ahead of three-time winner Steven Jeeves of England and Roger Pieters, and now cannot be caught.

In the women’s ISBT rankings, both ISBT record title-holder and one-time champion this season, Angie Brown and two-time winner Marianne Pelz have eased past Martina Beckel of Germany, who won three titles this season, into the top spots, with Brown now looking strong favorite to regain the ISBT top ranking she last held in 2013.

The final stop for 2016 International Seniors Bowling Tour, the Zeeland Senior Open, will take place from Nov. 29 through Dec. 4 at Bowling Goes in the Netherlands. Full details are available at the ISBT website.

Report and results by Tony Brown. 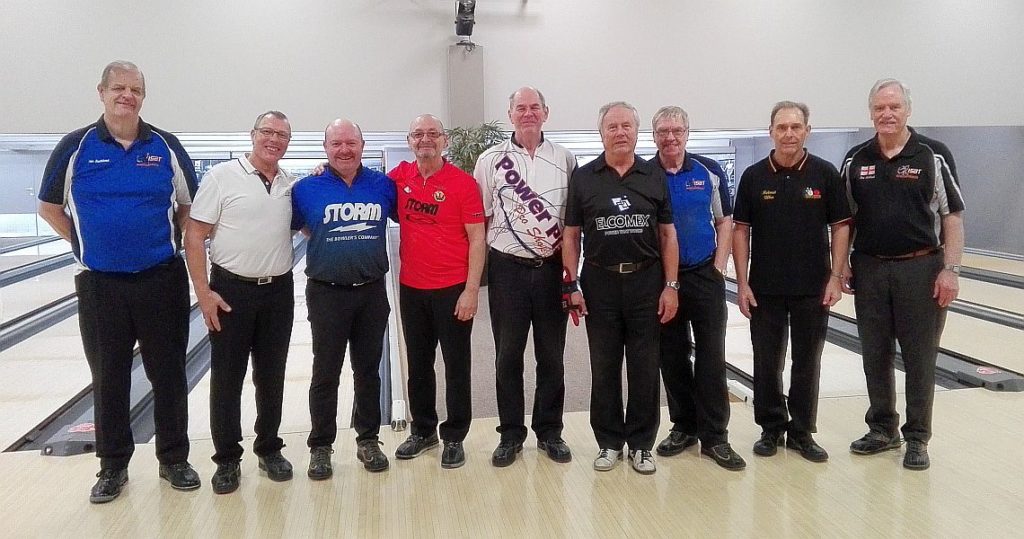 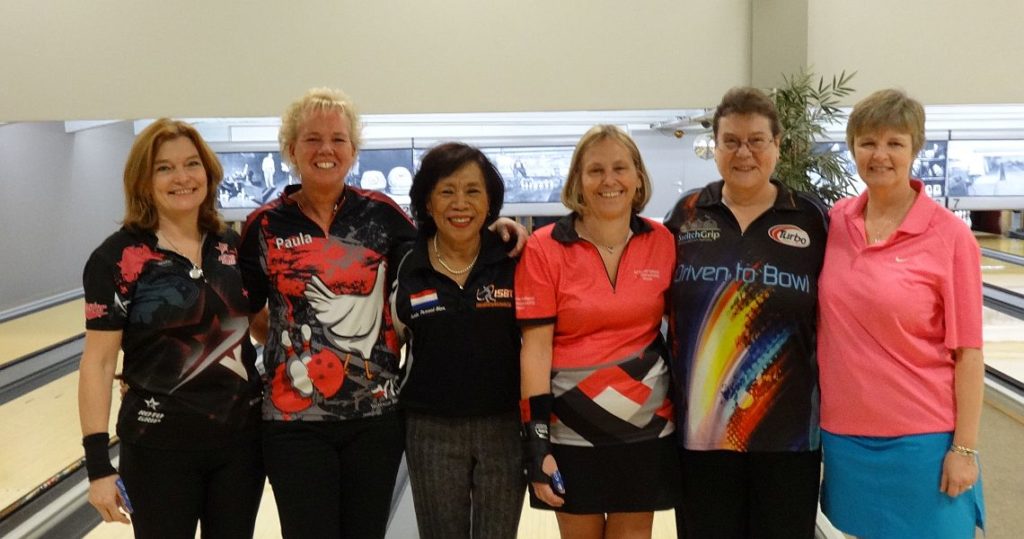 Top 9 advance to the finals.

Top 6 advance to the finals.

Top 12 advance to the next round.